Stormy Alcott supports herself, her two children and her mother by working as an independent cross-country trucker. When low fuel forces her to get off I-40 in Winslow, Arizona, she sees and pick up a passenger who turns out to be a musician down on his luck. Together they make some amazing music. Is a career change in her future?

Tom Holden, newly back from military duty in the Middle East with the Tennessee National Guard hopes to catch up with his old band in Las Vegas. His old truck breaks down, leaving him stranded in Winslow, Arizona. Just before a violent summer storm hits, a lady trucker gives him a lift. Can the inspiration she provides help him and Taken By Storm make it to the big time? 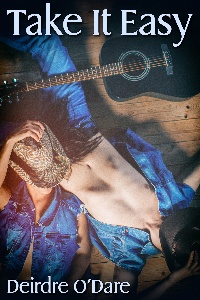 Stormy socked him on the shoulder. "Go on with you. I don't need no forty acres to turn my rig around. Twenty will do just fine."

At the instant her fist impacted his solid bicep, his hand closed around her wrist. All at once the cab filled with a humming tension. Energy arced between them, eyes to eyes and skin to skin where his callused fingers shaped a bracelet around her arm. She relaxed her hand and spread it across the heat of his solid muscle absorbing the masculine power he radiated.

After a moment, he tugged, shifting her balance until she fell forward toward him. He released her wrist but only long enough to close his arms around her. She settled against the comfortable breadth of his chest, a slow sigh leaking out of her lungs. I'll move, pull away in just a minute, but this feels so damn good ... Before she completed the thought, his mouth found hers and coherency flew right out of her mind.

He tasted of coffee and mint gum, and he kissed like a master at the craft. She didn't even think before she opened to the teasing probe of his tongue. He edged a hand up between their bodies and palmed her breast. Her whole body shivered at the touch as her nipple pebbled inside her bra, straining at the silky lace fabric. It felt like heaven but was still not enough. Nowhere near enough.

"Can't get a room but the sleeper behind us has a real nice mattress." She cringed at the inane remark, but it was said and it made the point.

"Lead on sugar. I'm right behind you."

Stormy kicked off her athletic shoes and dropped them down beside his boots. Before she was done, he laid her back with two sure hands and rolled up to prop on his elbow looking down at her.

He reached with one hand, sliding it under the hem of her shirt where it had pulled out from being tucked into her jeans. His hand felt hot and a little rough on her skin. Sinfully good, too. She shivered at the ticklish caress.

"Soft," he murmured. "I knew it would be. You might act like a tough lady but your skin says that's a lie."

One by one, working with only one hand, he undid the buttons, starting at the bottom and moving up. The cloth fell away to her sides, letting the slight breeze from the AC unit whisper down on her bare skin. Finally the last button opened revealing her delicate lilac lace bra. She always wore nice underwear. She might have on faded jeans and an old denim ranch shirt but underneath she was all girl. He pushed the striped denim of her shirt back baring her shoulders as well as her chest.

"Damn, Lady, you're a sight for sore eyes. Just as pretty and perfect as you can be. I want to kiss you all over, starting right here." His head swooped down and his lips closed around one nipple, straining against the fabric of her bra. She sucked in a sharp breath as the sensation radiated through her body, setting her skin a-tingle and sparking a brushfire of heat in her pussy.

"It's been awhile," she said, her voice emerging in a strangled croak. "I'm not sure if I remember what to do."