Desperate for a Minneapolis getaway to prove she can break out of her by-the-numbers and by-the-book disciplined life, divorcée Paulina Natawance doesn’t expect to have her truck break down outside the casino in Cloquet where she’s had lunch. Nor does she expect to encounter a handsome man with long, flowing black hair, ebony eyes, and a smile that could melt the ice cream she’s holding.

While finishing up his shift at the Big Bear Casino, widower Tripp Beargrease isn’t looking forward to going home to celebrate Thanksgiving alone…again. But when he encounters a stunning Anishinaabekwe with legs to her neck, a tiny waist, and a pink, wet tongue licking an ice cream cone standing helpless at her dead vehicle, he’s more than willing to paddle his canoe to her rescue like a true warrior should.

With the garage closed for the holiday and the hotels booked because of Thanksgiving, Tripp generously offers his dinner table for Paulina to dine at, and his spare bedroom for her to sleep in. And maybe, just maybe this proper woman can repair his broken heart. But her truck is ready the next day, and Paulina has a big decision to make—return to the boring, predictable life she’s created for herself, or throw away her day planner and take a huge gamble on Tripp. 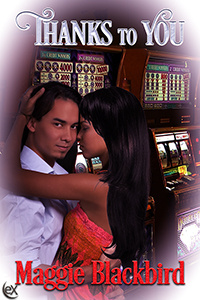 A siren wailed from outside the coffee shop where rows and rows of slot machines were located. Even at quarter after twelve, on a major holiday in the States, people gambled. And by the sounds of it, someone had hit the jackpot.

Paulina dipped her spoon into the last bit of the wild rice soup. Her friends had been correct when they’d told her to stop at the Big Bear Casino outside of Cloquet for lunch. The coffee shop did make the most delicious wild rice soup and fried bannock. Maybe she’d try a couple of quarters at the slot machines, too. Or maybe not. Although her friends loved to visit the States to patronize the many casinos, throwing money into a machine seemed a waste of…well, money. Plus, the exchange rate was terrible. An additional thirty cents on top of a loonie to purchase one American dollar.

Knowing she was an ice cream addict, no matter the time of the year, Paulina’s friends had also ordered her to try the delicious frozen treats supplied by the coffee shop. Before leaving, she’d purchase a cone of cookie dough flavor.

She was still a good two and a half hours from Minneapolis, depending on the traffic. Her hotel room waited for her in Bloomington. Hopefully, the biggest mall in America wouldn’t be too crazy for Black Friday, but it would be. Her friends had warned there’d be bumper-to-bumper people in the mall, fighting to grab a deal. But the fight was part of the fun, they’d added.

Fighting was what Paulina was doing in her current job. She should have road-tripped to Winnipeg instead. But breaking from her super-strict schedule had been imperative—a daring way she was in dire need of to acknowledge her first official year as a divorced woman.

The waitress sauntered by. “More coffee?”

“Everyone wants an ice cream from here, no matter if it’s snowing.” The waitress chuckled.

“I’m one of those people.” Too bad Paulina couldn’t purchase a few cartons of ice cream to take home, but shopping on Black Friday meant she’d go over her duty limit of two hundred dollars, and she had a set budget for this getaway.

The waitress returned, holding the check and the ice cream wrapped in a fitted paper for the cone.

Paulina took the bill, dug into her wallet for American money, and reached for her ice cream. “For such a packed place, it sure is quiet in here.”

“Everyone’s at the Thanksgiving buffet.”

“I see. Well, that’s a bit too filling for lunch. Have a great day. And Happy Thanksgiving. It is your holiday.”

“Yes, we celebrate our Thanksgiving in October.” Paulina set enough money down to cover the bill and a tip for the friendly waitress. “See you.”

Pauline entered the main area where people continued to sit and stare at slot machines, shoving in coin after coin. Her friends had also encouraged her to try bingo and the pull-tabs. She wasn’t that daring. Gambling didn’t offer guarantees. And after her divorce, she needed guarantees, which contradicted with her promise to try to be more spontaneous.

She kept walking through the casino. Her friends never took out travel insurance while getting away for the weekend in the States. Now that was a big gamble. What if an emergency occurred? This wasn’t Canada with a healthcare system. So she’d purchased enough coverage in case the unthinkable happened.

The sliding doors automatically opened. She stepped outside.

A few vehicles made their way through the packed parking lot. Cars and trucks zoomed by on the highway. The sun was out. Just as forecasted by the weather channel Paulina had checked before leaving, there’d be no snow for her drive to Minneapolis. It would be a wonderful warm weekend.

She hit the button on her key set to unlock her truck as she approached the vehicle. The ice cream on her tongue was purely delicious. Creamy. Tasty. Even buttery. No wonder everyone raved about the menu at the coffee shop.

Whoever that was could find someone else to whistle at. Her divorce had cost too much money—money she’d faithfully saved starting from her first job as a newspaper carrier. Men were off the list.

She got in the truck, still holding the ice cream, and turned the key. Nothing. She tried again. Not even a chug, a sputter, or a blip. This couldn’t be right. In preparation for the road trip, she’d had the oil changed. The service department at the garage had confirmed the truck was in excellent condition. Starting from the first vehicle she’d bought, she’d faithfully had them serviced based on the mileage.

Maybe there was a loose spark plug? She grabbed the manual stored in the console and got out. There had to be something in here about minor problems and how to fix them.