Used to life on the street, Finn never expected to be hired by a magician after saving him from a rival street gang—let alone a magician with a penchant for book hoarding and performing occasionally-exploding experiments. But Master Kestrall is a kind-hearted man, even if he sends Finn on far too many errands to the bookstore. After all, Finn is infatuated with Jonti, the master bookkeeper’s handsome apprentice. The only problem is, Finn has absolutely no experience in matters of the body and no idea how to go about acting upon his feelings. That all changes when, on one of his regular trips to the Crow’s Nest, Finn brings home a certain book that holds some very rare knowledge indeed—and when Finn accidentally-on-purpose summons an incubus into his midst, nothing will ever be the same again. 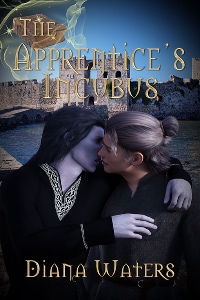 When Finn first heard the tell-tale sounds of a scuffle nearby, he ignored them. You didn’t just go poking your nose into every disagreement that broke out nearby, or you’d likely only get your own fingers or nose broken for the effort—if you were lucky, that was.

A shout echoing down the alleyway—more of alarm than anger, Finn thought—made him reconsider. It wasn’t kindness or even pity, but rather that the voice sounded out of place—not the kind of yell you usually heard when boys were scrapping among themselves over coin or food, or even when grown men were brawling. Besides, anything new that happened was always cause for curiosity. Sometimes you could profit if you were the first to know something—tidbits of information could be traded for favors, or an unexpected situation could turn into a sudden piece of luck. If it was a scuffle involving several people, all too busy trading blows to pay attention to one more small, bedraggled figure on the scene, you might even pick up a stray copper or scrap of bread. Finn was not strong, but he was quick on his feet, and that had proven useful in the past more times than he could count.

Edging his way warily closer to the commotion, the interconnecting alleyways were familiar enough to him that he felt in no real danger yet. Finn eventually found his way to four older boys, all about as scruffy as himself, dancing around a very tall but clearly not street-sharp stranger, who turned this way and that in the filthy alley as he tried to fend off their blows.

The boys were canny and darted around the older man, scurrying out of reach whenever he tried to make a grab for one of them, then skipping back in with a well-aimed kick or punch. They were too small to do any real damage, but together they were gradually wearing the man down, jumping up to scratch at his face, forcing him to work hard to defend himself.

There seemed little to gain from joining the fray, and Finn wouldn’t have interfered had he not seen one of the boys was Jasom, the largest of the gang, laughter painted plain on his face as he jeered at the stranger, raking at the man’s eyes with his fingernails.

They were not aiming to kill, that much was clear, but Finn had a score to settle with Jasom. One night last winter, Jasom and his boys had stolen Finn’s only blanket, leaving him to shiver in the snow. He’d only lived to tell the tale because some other poor soul down by the docks had taken pity and let him shelter under the same doorway for the night, their shaking bodies pressed together for security and warmth. Finn had not forgotten. In this city, sooner or later, a debt was always repaid.

Even so, he was not fool enough to get involved in a fight there was no way he’d win. He left plenty of space between him and the gang of boys as he yelled to get their attention, drawing it away from the hapless stranger for a moment. “Hey! Hey! Back off, I’m calling the City Watch!”

Jasom jerked to a stop and whirled around to face him. His sneer did not falter when he recognized the speaker. “Fuck off, Finny. You wouldn’t dare—”

Finn sucked in a breath. “Over here! Help! Murder, murder, help us, gods, he’s got a knife—” He belted out the words at the top of his lungs, adding in a high-pitched shriek for good measure, praying there actually was someone from the Watch close enough to hear.

Anyone with half a brain did their best to steer clear of the Watch, and Jasom’s expression grew even uglier, if such a thing was possible. “You’ll shut your mouth, damn you, or I’ll kick your bloody teeth in—”

Finn grinned and let out another wailing cry, even louder and more dramatic than the last, his throat raw with it, and to his gratification, heard an answering shout from somewhere in the distance.

Maybe it was the Watch, maybe it wasn’t, but even Jasom wasn’t foolhardy enough to chance it. Even if his gang had possessed a single weapon between them other than their fists, no gaggle of boys would win against a single member of the Watch—and the soldiers never patrolled alone. More to the point, the Watch both wore and carried steel, and unlike most of the street urchins roaming the alleyways or skirting the edges of Market Square, would probably be applauded if they just so happened to kill someone in a fight. After all, it wasn’t murder if you lived on the other side of the bridge.

“I’ll be back for you, little Finny, don’t think I won’t.” The words were spat into his face as the gang of boys melted away, back into the safety of the twisting passages. A few other choice words heralded their flight.

Finn was left with the overly tall stranger, both of them breathing heavily. Finn took another careful two steps back, just in case the man was more dangerous than he appeared, although he somehow doubted it. The man might have been large, but he also seemed confused, peering vaguely around him as though he was unsure what had just happened.

“Excuse me. Have you seen my eyeglasses? They should be on the ground around here somewhere…”

Finn blinked, instinctively casting about for the item. He saw them almost at once, lying several feet away from where they’d been knocked from the man’s face at some point during the scuffle.

“They’re broken.” He picked them up and handed them over cautiously, still keeping an arm’s length between himself and the stranger.