Finding love isn’t easy, and holding onto it can be even harder. In this anthology, harsh words and miscommunication between men aren’t helpful, and jealous lovers with well-meaning best friends always make things worse, except when they don’t.

It could be a desperate cowboy seeking a home or a dorky associate with questionable fashion sense and self-esteem; a manager who sticks to his principles despite ridicule, or a cheating fiancé and a broken wedding. Can a jaded grocery store worker find satisfaction, or a bouncer forgive the bassist who tricked him into sex? Perhaps it’s the things we do that make our wishes and demands come true.

Contains the stories: A Cowboy For Keeps, A-dork-able, And This Is Ed, Back at the Altar, Dream Man, I Can't Get No Satisfaction, Romancing the Bouncer, and The Best Man for Me. 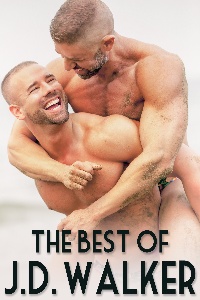 EXCERPT FROM "A Cowboy For Keeps"

“Hey, Roscoe?” I said. “Tell Danny here how you ended up at this ranch.”

“Oh God. I was a train wreck.” Roscoe placed his beer bottle on the table and leaned on his elbows, rubbing his face with his hands. Ret, who sat on his left, leaned in and pecked his cheek.

“I know, baby. Thank you.” He grabbed Ret’s chin and gave him a quick, hard kiss on the mouth.

“So,” Roscoe continued, “a few years ago, I worked at a five star restaurant. Had a great job, boyfriend, the works. One day, I got home late -- nothing unusual about that since I always worked long hours -- and I found a note on the refrigerator from Brad. It said that he’d found somebody else who would put his needs first, and give him the attention he deserved. Guess he got tired of my work schedule, though he’d known what was up from the get go. I was real cut up about it, having given ten years of my life to that ungrateful bastard. I even hired a P.I. to find him, since he left town, and I wasn’t ready to let him go. In the end, the whole thing messed me up so bad, I lost my job, my house, and I became a drifter.

“A year ago, I happened to be hitchhiking ten miles from here, when Slim picked me up on the side of the road. Asked me where I was going. I said ‘nowhere.’ He took me back to this place, found out I could cook, and that was the end of it. He and Ret helped me through some tough times and drew me into their circle. I was real lucky he found me.” Roscoe reached out a hand to cover mine on the table. I pulled his hand to my mouth and kissed the back of it.

“Your boyfriend left you because you weren’t around to fawn over him every waking minute? Sounds like a selfish prick to me,” Danny said. I stared at him, surprised that he contributed anything at all to the conversation.

“I agree with you, but it took me a long time to believe that,” Roscoe said.

“I, on the other hand was hired by Slim to take care of the ranch some years ago.” Ret gave me a sly smile. “He looked like a stray when he came into town, wandering around the feed store, trying to figure out what to buy for horses and cows. He’d just bought this place from a couple looking to retire in Florida, and didn’t know the first thing about ranching. I thought he was earnest, clueless and cute. I needed a new place to be, and greenhorn here needed a keeper.”

“I wasn’t that bad,” I complained.

“Yeah, sweetie, you were. But we love you all the same,” Ret teased.

“I’m not feeling much love at the moment, son.”

“I’ll make it up to you soon, don’t you worry.” Ret gave me a wicked smile and licked his lips.

“Ignore him,” I said to Danny. “He’s just showing out ’cause we got company.” Danny glanced at each of us in turn, then took a deep breath.

“Yup,” Danny replied, and gulped down the rest of his water.

“I know you have bruises on your face and arms. Anywhere else? Do you need a hospital?” I should have thought of that before.

“No, no. Just some down time. Once I’m feeling better, maybe I can do something around the ranch, pay you back for the kindness you’ve shown me.”

“Don’t you worry about that,” I said. “You have a safe place to heal, if you want it. Take all the time you need, right guys?”

“See? We want you here.” I smiled. “And it helps that you like men, since we get real affectionate with each other, day or night, inside the house or in the barn. Just a heads up.”