When Ira is sent home early from his work on All Hallows’ Eve, he finds a mysterious woman lingering on a bridge. She is desperate and wild, and as she falls into the river below, Ira follows, determined to save her against all odds. But when she awakens, he finds nearly drowning is the least of her worries. A far darker entity is haunting her. Can he save her before the time runs out? 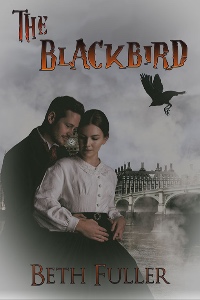 Ira’s footsteps faltered and froze. The words were quiet, barely more than a breath on the air, and Ira wasn’t quite sure how he had caught them at all amidst the clatter of hoofbeats and carriage wheels rumbling down the cobbled streets beside him. The distant sound of hawkers and street vendors made strange, almost inhuman harmonies through the fog, like sirens calling him out to sea, and the world seemed both frighteningly empty and yet not quite empty enough, all at once. Clutching at his hat to stop it from being blown away, Ira cast about the city streets around him for the source of the words. He could see no one there, but that was not surprising, given the inclement weather.

And yet, that voice had seemed so near—as if it were just over my shoulder.

He didn’t like to think of himself as superstitious, but all the same, Ira shuddered as he pulled his rain cape a little more closely about his shoulders and carried on slowly over the bridge. He had been sent home early today, along with all the other junior clerks. Mr Fennis had warned them to go straight home lest they get lost in this fog. His colleagues had laughed and, despite promises to the contrary, headed straight to their clubs and taverns for warm drinks to ward off the chill, but Ira hadn’t joined them. The cold of the late October day was seeping into his bones, making him weary, and he thought he would use his impromptu half-day holiday as Mr Fennis had intended them to, huddled up beside the fire in his garret, warming his fingers around a cup of tea. Even if he would be spending the afternoon alone, he thought morosely. That was nothing new in Ira’s life. He was used to being alone by now, but just the same, he did envy the companionship and love his colleagues all seemed to find and neglect with equally contemptuous ease.

Ira sighed, and his fingers twitched, as if they could already feel the embrace of warm crockery. His father’s signet ring slipped a little on his finger with the movement. Ira pushed it farther back down the knuckle, lest it get lost. Then, shoving his hands deep into his pockets, hunch-shouldered against the cold, he strode farther over the bridge to the cheaper half of town.

His feet rang out taunting, sonorous songs over the metal as he walked. This bridge was one of many in the bustling city, little more than a metal scar over the steel grey river beneath, with dirt-smudged shop fronts on either side of the river’s edge. Now and again he could hear the faint call of a shop bell as intrepid customers bundled their way through the pea-souper enveloping them. Footsteps seemed to pass him by in the misty grey without any apparent bodies attached to them.

He jerked his collar up higher over his neck once more, telling himself it was the chill of the air which made the hairs prickle there, and yet he couldn’t deny that he was uncomfortable. Every noise seemed to echo disconcertingly until even his own heartbeat, thumping with an eerie persistence in his ears, seemed muted and distant—and where had that voice come from?

Ira shuddered and had just put the whole thing down to his over-active imagination and the disconcerting effect of the midday gloom when another pained sigh reached his ears. He squinted towards the noise and saw a strange dark shape lingering on the edge of the dismal greyness before him.

He reared back with a hoarse yell of horror, stumbling away from the amorphous beast instinctively. His muscles bunched to flee from the monster—but then it turned to look directly at him.

Two wild eyes stared out at him from a pale face, and he found that it was not a monster at all, but a woman, huddled up beneath a dark and dirty cloak.

And yet, what a woman! She could scarcely be human, towering head and shoulders above him, paler than death itself. The hair which curled out in tangled gnarls from beneath her hood was blacker than sin, and her lips were bloodless and cracked. Perhaps fancifully, it seemed like cold was seeping off her very skin, a cold more chilling than even the October air which surrounded her. But her eyes—Ira shuddered away fearfully—they burnt with wild, fiery desperation that Ira had only seen before in the frescoes of the damned in cathedrals. He found that he couldn’t hold her gaze.

“I have to. It is the only way,” she whispered again, and Ira wasn’t entirely sure she was talking to him or was even truly aware of his presence at all.

Then, abruptly, she fell forwards, her cloak streaming out behind her like an avenging angel’s wings or a stream of sulphurous smoke in a devil’s path. She disappeared into the fog entirely, the mists beneath the bridge swallowing her whole.

Ira let out a hoarse yell and felt his feet dragging him, almost unwillingly, forwards to the place she once had been. His fingers tightened around a cold coil of metal, and he realised too late what had happened. Not an inhuman woman towering far above where a mortal ought to, but a desperate, human woman teetering on the edge of a bridge railing, about to cast herself into oblivion beneath.

Even as the realisation came to him, he heard the loud splash from the river beneath. He screamed for help, but it only echoed dully back at him in the empty street. He peered over the edge of the bridge, but the fog was so thick that he couldn’t even see the river passing by below.

With a wordless cry, Ira tore his rain-cape from his shoulders and leapt over the railing, pushing himself over the metal bar with one hand.