Twenty years have passed since the end of The Magic Pact. Cameron is a marijuana grower who quickly becomes entangled in finding the culprits behind a series of explosions. In the meantime, he takes not one but two lovers: his boss Ezra and a dealer named Nicky.

When they can no longer stay in the city, the trio and some friends travel out into the unregulated lands of what was once the United States. They come upon distorted and mutated forests and learn of a person who turned off the magic years ago. They conclude that magic is the only thing that can eliminate the forests, and they must find this powerful person to get their help.>

Can they survive in a dangerous and foreign world? And will they find the mysterious person they’re looking for? 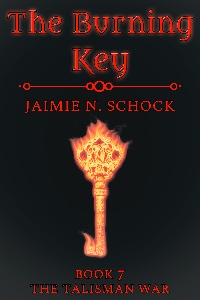 He spent hours each day just keeping Ezra company. They had sex now and then -- and that certainly helped relieve some tension -- but mostly, Cameron provided much-needed conversation and distraction. He accompanied Ezra on trips and errands. They were on one such mission in the evening when Nicky came running down the street toward them.

Out of breath, “We have a problem.”

“What’s wrong?” asked Cameron, with genuine fear in his voice.

“There are army guys in the lobby. They’re trying to figure out which floor we’re on.” He gulped. “The receptionist is stalling, but I’m sure they’ll figure it out soon.”

“Oh God,” was all Ezra provided at first.

Cameron stepped up as he faltered. “We have to tell everyone. I’ll go with you.” He stopped only long enough to give Ezra a kiss on the cheek. In the next moment, he and Nicky scrambled toward their building. They used the back entrance and rapidly ascended the stairs. Once they got to their floor, the couple started yelling to everyone that they had to leave.

Most of the men and women who worked for Ezra left immediately, some with only the clothes on their backs. They hurried down the stairs and took off in all directions. Rachel grabbed a few things before leaving. Anjea required more time, as did a man named Gerald who had been injured in the warehouse blasts. Cameron instructed Nicky to help Gerald while he focused on Anjea and Koa. They gathered up as many diapers and bottles and other baby items as they could carry. When Anjea was ready, she and Koa departed, leaving Cameron by himself in their empty home.

He should have left. But he didn’t. Instead, he headed for the growing room. His plants would have to be abandoned, but he could harvest some of the older ones and grab seeds, like he did at the warehouse. This time, however, he had to be quick. He selected the nearest plastic bag and got to work. When he finished, he found a firearm, some money, and an extra change of clothes in Ezra’s room. In Nicky’s, he collected family photos. Save for the gun, he stuffed it all into a backpack and headed for the door.

But he wasn’t fast enough. On his way down, he ran into a soldier, who perhaps was just as surprised to see him. It was one of the men who had stopped him and Nicky. And Cameron was now carrying a bag full of pot. This was life and death. So, he did the only thing he could think of. He rushed the soldier. Pressing his gun into the man’s stomach with the hope of dulling the sound, he took a breath, and fired until the magazine was empty.

He knew what he did would result in injuring or killing the guy, but nothing could have prepared Cameron for what he saw. The soldier was younger than him, and his expression looked somewhat like that of a child who had just been given horrible news. Blood oozed from his abdomen. He glanced at the wounds but didn’t seem to believe it. In the next moment, he lost his footing and tumbled down the stairs. By the time he hit the landing, he was dead.

Cameron felt like crying. He’d never hurt anyone before, and he never wanted to. He knew it was him or the soldier. On some level, he understood that he made the right choice, for his own survival. But it didn’t help. As he crept down to the body, a lump formed in his throat. It really was a kid. Maybe eighteen or nineteen. He killed a teenager.

He didn’t know why he did it. Maybe he wanted to remember. Maybe he wanted to punish himself. Whatever the reason, he bent down, ripped the dog tags off of the corpse, and shoved them into his front pocket. He didn’t dare look at the name -- not yet -- but he would have something to recall this moment.

Purr of the Lions (MMM)
Marcy Jacks
In Shelf
$4.99
Tweets by
sirenbookstrand