As the holidays approach, Tessa -- a warm, ugly-sweater loving personal assistant -- finds herself spending yet another holiday away from her family. Unable to fly home, she must find something else to do with her time. Little does she know, she's in for the holiday of a lifetime when she gets called into her boss's office three days before Christmas.

Colette Sylvestre is not someone you could call warm -- collected, intelligent, charismatic, maybe, but not warm. She is, however, in the running to take over her family business, a prestigious publishing house; all she has to do is convince her grandfather she has settled down enough. Her cousin Bernard, however, is determined to undermine her and take the position for himself. To convince her grandfather, Colette must bring a date back home to celebrate Christmas with her family. The only catch? Colette is currently single.

n a spur of the moment decision, she asks her personal assistant Tess to be her date for the holidays. What follows is a series of holiday related hijinks, from a fancy gala ball to awkward conversations with Colette's family as Tess tries to convince them she really is Colette’s girlfriend. When Tess realizes her little crush on Colette might not be so little, things are complicated even more and she has to decide whether or not to tell Colette.

Will Colette return her feelings? Will they be able to convince her family their relationship is real? And, most importantly, will Colette ever forgive Tess for her frankly awful sweater choice? 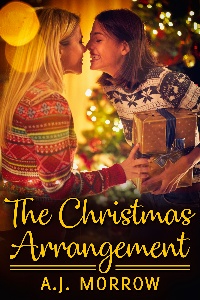 Tess groaned. She had absolutely no idea what she should wear. Usually, she was excellent at meeting her partner's parents; Tess was naturally sweet, with a warm smile and good manners, but the fact that Colette's family owned the business she worked for meant she couldn't just rely on what she knew. There was also the fake relationship aspect, of course. She couldn't forget about that.

A muffled buzz came from her phone, which lay on top of the heap that'd been Tess's original outfit. She scooped up the phone and turned it on to see a text from her sister, asking her to call. With a smile, Tess obliged.

"Please tell me your last text was a joke."

Tess laughed. "You know that's not my sense of humor. Colette really does want me to fake date her. Weird, huh?"

There was a sharp intake of breath on the other side of the line. "Weird doesn't even begin to cover it. Whose family is that into generational wealth, anyway? It's positively medieval."

"I know. I don't think they're that wealthy, actually -- at least, not as wealthy as Colette's crazy pant suit collection would make you think -- but they're all in with the family business. Colette sent me an email with all the basic information for the holiday, and, honestly, her family is nothing like ours." Tess held the phone between her shoulder and her ear as she climbed into a different skirt. There was a pause as Elsie considered what she said.

"I'm not sure about this, kiddo. This whole thing feels like a bad idea."

"Don't worry, it's just for a few days." Tess nearly toppled over as she tried to zip up the skirt. "And even if I embarrass myself, it's not like I'll ever have to see her family again."

"I don't mean like that, Tess. I mean with your boss. Don't you have a massive crush on her?"

"Yeah, well, that doesn't have to matter." Tess bit her lip.

Elsie's silence was so strong it practically reached through the phone and slapped Tess itself. As her big sister, Elsie had always looked out for Tess -- whether it was protecting her from bullies, mean bosses, or, more often than not, Tess herself. Sometimes it was like a full time job, not that Elsie minded.

"I can control it for a few days," Tess said, "I can act like a normal person -- and then, when it's over, I can use the raise to book a flight back home for the next holiday."

"I wish you could be home this holiday, instead of pretending to date your weird boss. You know we'd fly you down here if we could, right? Mom is desperate to get you home." Her voice shifted from protective big sister to genuinely upset, and Tess couldn't help but feel guilty.

"Yeah, yeah, of course." Tess smiled, and let the warmth leak into her voice. "I'm sure I'll be down next year, and I'll call plenty while I'm away."

"You better -- I'm serious. Mom'll have your guts for garters if you don't keep her in the loop."

Tess laughed. "I know, I know. Listen, I've got to finish packing, so I'll say goodbye. Talk to you later?"

"Yeah, okay. Mom says to send her love. Bye." Elsie hung up, and Tess let her phone drop back onto the bed.

She bit her lip. What was she meant to pack for a trip to an unknown location, to meet Colette's family? The email Colette had sent was vague at best -- apparently she would need 'good, neat clothes, suitable for dinners out', but Tess wasn't sure that any of her clothes fit the bill. Colette was unlikely to approve of Tess's fluffy jumpers and comfy jeans, that was for sure. Her snarky comments on Tess's pastel work clothes had become a running joke at the office, since, when they stood next to each other, Colette looked like the Ice Queen with a munchkin by her side.

Tess stripped off the skirt and stared at herself in the mirror in frustration. She had a soft face, with wide, soulful eyes and full lips, and a nervous air about her. Even in her underwear -- red, lacy, with a festive trim she'd thought was funny when she bought it -- Tess looked awkward. She sighed. There was no way she'd impress Colette's family, not really. She just wasn't the kind of person to impress people who valued the sort of things Colette did. It was a wonder (or a sign of Colette's desperation) that Tess'd been asked, if she was honest.

Eventually, she shoved another armful of books and her most Christmas-y clothes into her suitcase, and decided to leave it be. Holidays were meant for relaxing, after all, so she was probably overthinking it. Just as Tess was zipping up her bag, her work phone rang.