The Color of Rage (FF)

In the 24th Century, civilization and country borders have changed. Law enforcement has changed. Money has changed. But politics have not.

It is the beginning of the election season and riots are breaking out after every political rally. Dr. Engalla Ruth has found a way to ensure elections, but it will take a lot of work. Why settle for the lesser technicians when she can get the very best? Should she buy or seduce the one she wants?

Some think the music discs everyone have might be the cause of the violence, and only Dr. Kailyn DeKendren, the leading authority in Acoustic Behavior, would know. Her sister, a Sensei training the security forces, has promised to find out. But right when she's needed most, Kailyn mysteriously disappears. Can she be found before all hell breaks loose? 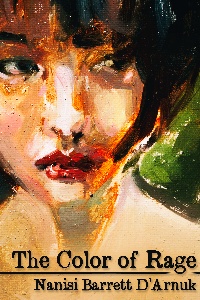 The Color of Rage (FF)

Engalla stood facing her, her hands deep in her trouser pockets. She looked very sure of herself, very confident.

“I’m sorry, Engalla,” Kai could not keep the hatred from her voice. “This won’t work at all. I won’t help you. In fact, I’ll do everything I can to stop you.”

She started to push her way past Engalla, but the other woman reached out and clasped her on the shoulder. At the touch, Kai felt the prick of a sharp needle at the base of her neck. She quickly grabbed Engalla’s wrist and ripped it away. In her fingers was a small, soft plastic vial, now empty, attached to two short, hollow needles. The contraption was rigged so that the pressure of the initial contact pushed the fluid through the needles as they penetrated the skin, like snakebite.

“You do underestimate me, don’t you,” Engalla snarled.

“What is this?” Kai swore sharply.

“Just something to calm you down so we can talk this through.” Now Engalla’s voice was low and calm.

Kai wanted to strike out, to smash Engalla’s smiling face, but her arm already felt heavy and would not respond to her commands. It moved slowly, as if through heavy syrup. Even with her mind shields firmly in place, Kai felt panic surge through her. Every molecule in her body screamed to get out of the building, to run, to get away, but as she tried to turn toward the door, she felt the drug seeping into other parts of her body, keeping her from making the distance to the exit. Her legs became rubber and gave out beneath her as she crumpled to the floor, unable to move. Her breathing was ragged, her eyelids heavy. She was struggling to keep them open, and she tried to speak but her tongue and her vocal cords would not respond. She felt her heart racing and, try as she could, she could not slow it down, or slow the movement of the poison through her body.

“Don’t panic, darling, you’re not dying. I want you here alive. I still need you. I need your work. You’re right about the disks. They need your touch.”

Kai sensed that Engalla was kneeling beside her but could not turn her head nor open her eyes to see. She heard other footsteps enter the room. Two people? Where had they come from? Her mind took in the vastness of Engalla’s preparations for her visit. The trap was like one for wild horses walking trustingly into the blind canyon and finding no escape. How had she allowed herself to be caught so easily?

“Put her in the middle chair,” she heard Engalla command and felt herself being lifted from the floor and carried to the chair module that had been pushed back into the horizontal position. She felt hands, strong and smooth, a woman’s hands, checking her pulse, her heart rate. They pulled her eyelid open and she was momentarily blinded as the harsh light rushed into her dilated iris.

“She’s all right. Just the voluntary muscles affected. Still response in the involuntary.” The woman’s voice was higher, younger than Engalla’s and had a soothing quality, like the Medi-techs at the Center were trained to use. “I’ll hook her up to the life-function monitor, just to be sure. And we’ll give her some oxygen, too. That will keep the mind as open as possible.”

“Which disk do you want?” This was a new voice, another woman’s. It seemed familiar but Kai couldn’t place where she’d heard it before.

“Use them both, but loop them so they form a continuous stream.” Engalla’s voice had a harsher tone now. “I don’t think she’ll be a very willing subject. This may take some time.”

“How long will the drug last?” the second woman asked.

“About twelve hours,” the younger woman replied. “Will that be long enough?”

Kai felt electrodes being attached to her scalp.

“Probably not,” Engalla’s voice seemed lower. “You should tape her into the chair. Although, by that time, I don’t think that there’ll be much fight left.”

“I’m sorry I have to do this to you, darling.” Kai felt Engalla caress her face as her wrists were being taped to the chair arms. “I really have no other choice. I do need you, and now you know too much.”