The Cool Part of His Pillow (MM)

The mid-40s are that time in a gay man's life when his major paradigm shifts from sexy to Sansabelts. But when Barry Grooms's partner of twenty years is killed on Barry's forty-fifth birthday, his world doesn't so much evolve as it does explode.

After navigating through the surreal conveyor belt of friends and family, he can't eat another casserole or swallow much more advice on what constitutes grief. Still numb, he leaves his homestore and design business in the care of others as he escapes to Key West, then New York. There he gets a thankless new job working for a crazy lady in a poncho, then has too many drinks with a narcissistic Broadway actor. Next it's a nude exercise class that redefines flop sweat, and from there he's on to a relationship with a man twenty years his junior.

Yet no matter how great the retreat from the man he used to be, life's gravity spins Barry back to the small town where he grew up for one more ironic twist that teaches him how to say goodbye with grace. 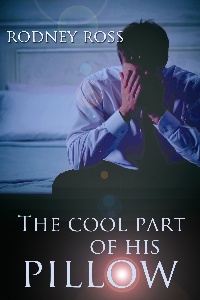 The Cool Part of His Pillow (MM)

How long as it been since I objectively inspected my body as a means to an end? I had achieved the end: Andy.

I could enumerate how many bags of unsold potpourri the gallery had the day I left, I gleefully catalog friends, yet I have woefully forsaken the Dewey Decimal of my own bits ‘n’ pieces. Could the mid-forties elasticity of my means snap back? To compete in events of the flesh, I need recertification. So how old was Miss Brodie, anyway, when she was in her damn prime?

I stare at myself in the three-quarter-length closet mirror. My eyes aren’t as blue, my temples are teased with gray and flecked with hyperpigmentation and my earlobes grow goatees if untended.

I retie the towel higher.

This doesn’t help. A few more pounds and I’ll be a backward S, a pygmy. With all the strides made, it seems someone should have a flesh lace-up along the backbone that I can tighten, like a corset. If I wear the sheerest Spanx available, will that count as nude at the workout? I knead my love handles (although I challenge anyone to actually carry me by them). Only when I inhale until it hurts do I locate my ribs, comfortably resting beneath pinchy folds.

My nipples used to be Hershey Kisses. Now they’re sun-dried tomatoes. Andy had a gym buddy whose nipples were like pepperoncini from his foray into tit-pigdom. It was way too much pulling for my liking, but they sure made a statement. My breasts have begun a doughy slide into my armpits. I can’t see, but I wonder if I have hot dog neck, overlapping pink bands plumping on the back of your neck. Add some baked beans and gnats, I’m a picnic.

I have old hands, my mother’s hands. All of those refinishing solvents, that’s what did it. Old and dirty hands. My shabby fingernails are in need of a good cuticle push.

“Well, you could stand to be thinner,” I announce to my reflection. I drop the towel and look down. “And you could be fatter.” Here’s where I’m supposed to swagger that “I ain’t had no complaints ...” All cockbluster aside, I wish it looked better in a communal gym shower, but it’s an average penis, not the serious sizemeat that lends itself to puppetry but also not the bite-size God saddled some with.

With my old, dirty hands I cup my stuf, not so high and tight, but they also aren’t trussworthy. I don’t yet have to completely hoist my sac to just cross my legs the way I watched my dad’s dad do. I also remind myself of the online profiles that idolize low-hangers and that one guy’s e-mail address: LOVE_THOSE_EGGS!

When did my legs get so puny? My calves were once sturdy from endless gallery walk-throughs. Why does a knee now look like a witch’s chin? I turn around. My ass looks like a baseball mitt. That was left out in the sun. After being run over by a car. I turn back around.

Skin tags. What are they? Why are they called that? Tag, you’re it, here’s another for your left inner thigh. I find a constellation of them near my collarbone. I’m turning into an anti-slip mat.

What is it Mom said about these, something about a string trick? Tie a bit around each, it cuts their blood supply, they’ll wither. Drawing attention to each dermal growth with a bow ... sounds like a winner. I stop feeling around. I don’t have enough curling ribbon.

I remember how Mom, when Olivia was always smelling like sour milk, tried to bolster her: “Look around. You’re cuter and have a nicer figure than ninety-eight percent of the people here, what’s the problem?” And Olivia’s monotone reply: “The two percent, Mom.”

I remember Captain Reg and the way he greeted complete strangers with his named penis.

WWAD? This seems to be the ticker symbol dashing along the bottom of my brain’s frame. I remember him quoting Wallace Stevens: “Sometimes you must go too far to see what would suffice.”

What the hell. I left my dignity at the legless man. What is clothing but armor? I am going to Nudercise.