The quiet village of Bradfield should offer Dr Sylvia Marks the refuge she seeks when she returns home from her time in a field hospital in France in 1918. However, she is still haunted by the disappearance of her lover, ambulance driver Anna Masters, two years previously. Settling back in as the village doctor alone in her large family house is more difficult than she realised it would be after the excitement of front-line medicine. Then curious events at a local farm, mysterious lights, and a hallucinating patient’s strange illness make her revisit her assessment of Anna’s death on the battlefield.

Lucille Hall-Bridges is at a loose end now her nursing work is finished. Her Mama and Papa are perfectly happy for her to pursue any or no career or social round; but she felt useful as a nurse and now she really doesn’t know what to do with her life. She hopes going to stay with her friend Sylvia for a while will help her find a way forward. And if that involves staying at Bradfield with Sylvia ... then that’s fine with her.

But Sylvia is still focused on finding out what happened to her very good friend Anna three years ago; and the unbelievable events at a local farm over the course of the last year don’t seem to have helped her let that go.

Will the arrival of Lucy in Bradfield be the catalyst that allows both women to put their wartime stresses to rest? Can Sylvia move on from her love affair with Anna and find happiness again with Lucy, or is she still too entwined in the unresolved endings of the past?

NOTE: This story contains mention of domestic violence that happens to side characters off-screen. 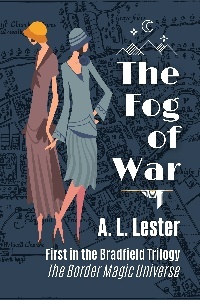 It was a beautiful late August day when Sylvia motored down to Taunton to collect Lucy from the railway station. The sun shone through the trees as she followed the lane down the hill from the village and the sky above was a beautiful summer blue. She had left the all-weather hood of the Austin down and wore a scarf and gloves against the wind, topping her trouser outfit off with her new hat, which she pinned firmly to the neat coil of her long hair.

Walter had watched her fussing with her appearance in the hall mirror, stuffing his pipe. “Areyou sweet onher?” he asked, somewhat acerbically.

“It’ll be cold with the hood down,” she said, crushingly.

“Yes, yes, so it will be.” He turned his attention back to his tobacco, face straight. “Be careful on the bends.”

“I will,” she said. “She’s a beast to drive, smooth on the straights and handles well on the corners, but I’ve no desire to end up in the ditch.”

She’d bought the big Austin coupe late last winter when she’d got fed up riding her motorcycle out to some of the more remote houses she was called to in the dreadful weather. It was huge, far bigger than she needed really, although the back seat was useful to transport a patient if she had to. She still preferred her ‘cycle, but it wasn’t exactly suitable as a doctor’s vehicle. Not very staid at all. The Austin wasn’t very staid either, in that it was huge and expensive; but one of the benefits of a private income was that she could afford it; and so why not be comfortable?

She pondered all this and more on the drive down to Taunton, mind floating along with no real purpose. She loved to drive and for some reason it calmed her thoughts and allowed them to drift.

It would be lovely to see Lucy again. As Walt had said, she was a sweet little thing. Although Sylvia didn’t want to revisit the grim minutiae of some of the worst times at Royaumont, it would be lovely to reminisce about some of their happier moments of camaraderie. It had been four years of extreme stress and grim terror lightened with moments of laughter and fun. Working with a team of competent women all pulling together for one purpose had been extraordinary. She’d never experienced anything like it before and she doubted she would again. She was delighted some of the staff had set up a regular newsletter so they could all stay connected.

And so what if Lucy was sweet on her. Sylvia wasn’t interested in that kind of complication anymore. She didn’t want to cause gossip in the village for a start ... although she supposed people wouldn’t make any assumptions about two women living together these days after so many men hadn’t come home from France.But anyway, even if itwouldn’t cause gossip, she didn’t think about Lucy like that. And she doubted Lucy thought about Sylvia like that, despite Walter’s teasing. He was stirring the pot a little to see what bubbled up, that was all.

Those musings took her to the station.

The train was on time and was just pulling in as she got out of the car. She walked out onto the platform as the smoke was clearing and through the clouds, she made out Lucy.

She was beside the guard’s van, directing the guard and porters to what seemed like an unnecessarily large pile of luggage. Despite the clement August weather, she was wearing an extremely smart velvet coat with a fur collar over a beautiful travelling suit that hung to mid-calf, topped with an extraordinary confection of a hat.

She looked competent and sophisticated and exceptionally beautiful. Not at all the slightly scapegrace young person of 1916 who had persuaded the hospital powers-that-be she was a suitable candidate for France, although she’d been only twenty-one and inexperienced as a nurse.