The Four Legs of Fate (FF)

Freshly out of a relationship with a woman who decided she likes guys better, Lisa Fitzgerald parties too much and wakes up the next morning with a puppy. Terra, as she names the dog, turns out to be a designer-breed full-grown Pomsky.

Erin visits her long-time partner Cici, who is teaching a guest semester in Paris. But Erin feels out of place in France and they break up when Cici asks her to move there. Max, a well-trained German shepherd, becomes Erin’s sole companion.

Cute little Terra wreaks havoc not only on Lisa’s home and life but also on Erin’s when she darts into Erin’s path as she is bicycling with Max. Lonely for human contact outside of work, Erin makes light of her spill and cons Lisa into spending time with her and Max.

Soon the four of them meet regularly. Their friendship blossoms when Lisa decides to keep Terra, but the women privately yearn for more while at the same time denying their mutual attraction. Having been burned recently, both Lisa and Erin are wary of crossing the line and promptly flounder when they ditch the dogs for an evening together. But their interest in one another persists and eventually they try a second time, only to fail miserably.

Can fate on four legs bring them back together? 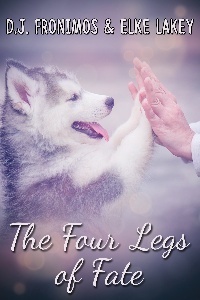 The Four Legs of Fate (FF)

Terra picked up speed and suddenly she was pulling Lisa forward. Oh no! A bicyclist was coming straight at them. Terra darted into the street at the same time that Lisa took a step back. Terra’s leash went taut and suddenly there was an ugly crunching sound as the bike’s handlebars met the pavement. Lisa watched in horror as the bicycle’s rider, a woman, toppled forward and slid across the pavement, stopping in a crumpled heap a few feet ahead. Lisa made as if to bend down to the woman and was stopped by the angry snarl of one of the biggest dogs she’d ever seen. Teeth bared, the German shepherd planted himself between the woman on the ground and Lisa with what she could have sworn was an accusing stare. She must’ve let go of Terra’s leash when the bicycle hit it because suddenly Terra showed up on Lisa’s left. Before Lisa could grab her, Terra flung herself at the German shepherd, yipping and growling and biting at the huge beast that could kill her at any moment.

Lisa, who’d been about to reach for Terra, pulled her hand back. The woman on the ground had pushed up into a sitting position. “Max! Voraus! And then sitz!” The German shepherd lunged forward and Lisa thought she was about to die as it came straight toward her, but went past an inch or so to her right where it stopped and sat. Terra tried to go after him, but the woman had managed to grab her leash and Terra was yanked back mid-lunge.

“How about giving me a hand up?”

“Of course.” Lisa felt her face grow hot. She had stood there helplessly while the catastrophe unfolded and the woman took charge, despite being the injured party. The huge dog remained still as a statue despite Terra continuing to make threatening noises in his direction. Stupid dog. Nothing but trouble.

Lisa pulled herself together and extended her hand to the woman on the ground.

“I’ve definitely been better.” The woman grimaced as she examined her right forearm where the skin was scraped off. “And, apparently, so has my bike. My front wheel is definitely out of alignment.” She had taken Lisa’s hand and gotten up and now pulled her bike upright as well. “Guess, I’ll have to push it home. You know, you really shouldn’t allow your dog to get ahead of you like that.”

Lisa took Terra’s leash back and gave her an angry glare as she tried in vain to assert her authority over the recalcitrant dog. The shepherd remained seated but with a tightly coiled air as he gave Terra a look that clearly showed what he was capable of. And yet Terra still pulled in his direction, stupid dog. “I can’t tell you how sorry I am. I only got the dog yesterday and it seems she hasn’t had any kind of training. Do you live far? Are you able to walk?”

“Of course. I live just one street over. About two blocks down from here. You’ve probably seen the townhouses. There’s a whole row of them. Max and I are in the last one at the corner which gives us a little more backyard. I ... Crap!” She had taken a step and now tentatively took another one, followed by a hissing intake of breath. “Looks like I’ve hurt my ankle.”

Max had risen to a standing position and Lisa resisted her inclination to step toward the woman to assist her. “What can I do to help? I’m not far from my own apartment. I can go back for my car and take you home. Your bike and -- Max, was it? -- should both fit. Don’t worry, I’ll drop Terra off.”

“Yes, please.” The woman flashed her a smile and Lisa was struck by how pretty she was now that she wasn’t frowning. “I would normally hate to put you out like that, but, I’m figuring since my spill was technically your dog’s fault ...”

Her tone was more playful than accusatory, and Lisa relaxed. “Honestly, I’m surprised Superdog here didn’t lead you in a graceful leap over the leash, or take the bike in his massive jaws and carry you to safety.” Lisa wrapped Terra’s leash around her wrist several times. “It’s the least I can do.” Never mind that she’d have to take the shortest route home, which meant going past the house with the immaculate lawn Terra had fouled.

“Superdog, eh?” The woman gazed fondly at the shepherd, who at a subtle flick of the woman’s wrist trotted to her side where he stood as if glued to her. “Guess we’ll be waiting right here for you. By the way, I’m Erin.”