Charlotte Mayweather, the penniless and illegitimate dependent of Drymote Estate, struggles to find her place in the world after the death of her uncle leaves her unloved and alone. When Edward Cotterhugh first arrives to claim his new inheritance, the heir of Drymote seems intent on nothing more than careless frivolity, much to the chagrin of his father, who will stop at nothing to see him embedded in good society. Charlotte quickly learns that Edward’s insouciant attitude hides a far darker past, though. As Edward learns to confront his ghosts, Charlotte fears that she is losing her sanity as her mother did before her. Together they must unravel the mysteries of Drymote upon All Hallow’s Eve, before it is too late. 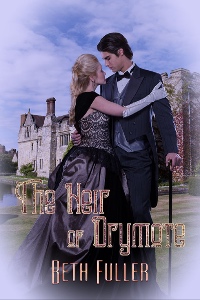 Shelter – there must be shelter somewhere.

Charlotte Mayweather peered dismally around the wild and rambling grounds of Drymote Estate, trying to blink the rain out of her eyes. Hydrangeas, their mop heads drooping under the onslaught, bobbed in silent agreement around her and the Michaelmas daisies swayed with the winds, but nowhere seemed to offer any sanctuary from the sudden downpour.

Nobody knows I am out here. Nobody is coming to help. The realisation chilled Charlotte’s skin as thoroughly as the rain did, leaving her shivering and miserable. The climb up to Drymote house was too steep and too far to run to, even if she hadn’t twisted her ankle when she fell. She clutched at that ankle now, sprawled upon the ground, trying to rub the throbbing ache away as the pebbled path tattooed indentations on her skin. Her respectable mourning blacks were now mud-dyed brown and she had lost her second-best shawl somewhere out there amongst the bushes when she had raced the storm for shelter and lost.

She tutted under her breath as she surveyed the damage. Her dress had scarcely been respectable as it was, old, meticulously mended, slightly too small. She had hoped to make it pass muster for Albert’s upcoming ball with some cheap glass jewellery and some old velvet ribbons, but there was no hope of that now.

Is that really my most pressing concern? I  will not be attending the dance at all if I have joined Uncle John in the grave.

Charlotte gritted her teeth and forced herself to sit up.

I never should have left the house today. Again, the hydrangeas bobbed in agreement. She scowled at their sanctimonious faces.

“It’s a little late for recriminations now,” she told them sternly. Unsurprisingly, they did not reply.

She huffed out a damp breath and wiped her hair out of her face, smearing little kisses of mud across her forehead. The truth was she felt like she could no longer breathe in the silent, grief-stained halls of Drymote, still wearing their mourning wreathes, crowned in crêpe at the door. These days it felt like she could not breathe anywhere where the wind was not howling and the skies were not an open call for freedom.

Still, she could not help but curse the feet which had led her through the extensive gardens. She had spent the day meandering down pathways, past the glass-houses and the lake, through the walled garden and the orchard rows to the farthest depths of the garden’s limits, down to the hidden, lurking corners where Uncle John had fallen prey to the eccentric fashion of follies.

And yet, perhaps one of those buildings might yet suit her purposes now, for she could hardly sit out there in the rain all afternoon. The staff would certainly think her eccentric if she did. No, they will think me mad. Rich old Lords like Uncle John can be eccentric—penniless, illegitimate wards are only ever mad. Perhaps they will even send me away to the same asylum my mother died in.

Charlotte shuddered, and it was not merely for the rain seeping through to her very bones. She could think of nothing worse than the beckoning madhouse. Better by far to die out in the open skies than locked away, chained to a bed, force-fed by an orderly.

She squinted through the dense flower beds, trying to acclimate herself after her fall. The Hermit’s Retreat, though by far the smallest of John’s follies, was also the nearest, so it was in that direction that she began hauling herself. Another flash of lightning seared across the shrouded sky, burning the clouds white.

She limped onwards, her ankle whimpering with pain every time she put her weight to it. Her old mourning dress, a remnant from Aunty Ursula’s funeral a few years back now, was weighed down with the waters that clung to it. She left a sweeping trail of mud in her wake as her sodden skirts kissed the pebbles and earth. She looked around for aid, but the howling world around her remained endlessly empty. The few gardeners—those who had remained at Drymote after Albert had inherited it and purged Uncle John’s old loyalists for cheap agency hires and untrained foundling maids—were clearly bottled away in the gardener’s bothy, drinking hot toddies and planning the planting season for next spring. She could not say she blamed them.

“Who would be fool enough to come out in this weather?” she muttered and laughed at her own imprudence, but it was quickly cut short. The ground beneath grew slippery as she staggered across it, her booted feet sliding upon the grass, chewing up chunks of mud with every slippery footstep. She fell again, adding a litany of bruises to her impending hypothermia, and though she tried, she found she could not regain her feet this time. She gritted her teeth.

“They don’t call you stubborn for nothing, Charlotte Mayweather,” she told herself fiercely. “You are going to make it to that folly if it is the last thing you do.”

She could not bear to put the weight upon her foot again, so she rolled up onto her knees and began the painful crawl down that final twist of path. Pebbles and twigs stuck to her palms and scraped her knees even through her petticoats. She was sure she looked ridiculous. Perhaps the rain was a blessing after all. She could only imagine how much they would mock her if anybody was to see. She forced herself onwards grimly, and when the cave-like temple came into view at last, Charlotte could have wept.