The Key Masters of Telemma

Bill Newell and Carla Meadows, both seventeen and both dying, live out their final days in a palliative care center in Portland, Oregon. Bill has no hope of recovering, but the appearance of a strange key on his bed one day intrigues him. Carla receives the same key, and soon they find themselves in a pocket universe ruled by one being, a being-not-a-being named Malgorath who wields immense power.

Malgorath makes them a deal. Find four keys, ones of silver, gold, glass, and paper, and return them to him. Upon their retrieval, he will cure them of their illness and send them back to Earth. For Malgorath, the keys are the key to finding Falnarth, a mythical world that holds many secrets.

Bill and Carla have no secrets to discover, save life. With no choice in the matter, they agree to the terms and soon find themselves journeying to worlds of silver, gold—ruled by robots—glass, ruled by a power-mad queen, and one of wood. Each key’s retrieval is more dangerous than the last but Bill and Carla are determined to succeed in their quest.

However, they soon realize that Malgorath has his own agenda, and they must do everything in their power before the demon can fuse the keys together and destroy—and recreate—the universe. 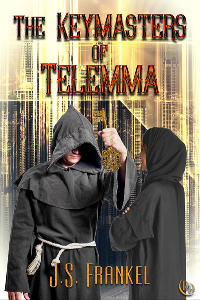 The Key Masters of Telemma

Bill Newell, seventeen, lay in bed, waiting for death to claim him. The overhead lights, harsh and unyielding in their intensity, made him narrow his eyes to shut out the glare, and women in white uniforms and men in long white coats came and went. Tubes stuck out of his arms, delivering medicine and nutrients. He cared for neither of them.

Sleep took up the other half of his day, that is, when he could sleep. It was a fitful kind of unconsciousness at best, as his insides were slowly being eaten away by an illness no one had ever been able to control with any degree of efficacy.

Health, he realized, was simply an illusion, as it never prepared a person for the rude reality of it going away. The death sentence he’d been handed brought home the reality of never achieving adulthood. He tried not to dwell on things too much, but with all this free time at his disposal, the thought of the eternal nagged at him like an open, festering wound.

Pain was a constant stabbing throughout his body. That made thinking clearly almost impossible without medication. If he had to attach a color to it, then it would be red. The agony got so bad that at times he thought his brain was on a permanent bleed. So this is what it’s like to die. It totally sucks.

Drugs had become his buddies. In a symbiotic way, he relied on them to dull the pain, yet the side effects were almost as bad. Prime painkillers made it possible to function, yet they stopped him up, and taking a dump was an ordeal in itself.

Bottom line—cancer didn’t care. The tumor, metastatic, had already invaded his liver and had fed into his bones. It was the most painful of deaths. Estimates by the doctors gave him around four months at most. “Just four months?” he’d asked when the final word came in.

“That’s about the size of it,” the doctor had answered, not unkindly. “I’m sorry.”

Bill had nodded and turned his head away. The doctor was sorry. The nurses were sorry. Who else? He wished for the umpteenth time the specialists had been wrong. It had to be a mistake—someone messed up. They’d gotten his name mixed up with another Bill. Common name, many people had it. Yeah, that was it. It had to be.

Reality—he hated that word—crashed down around him when he saw the intravenous tube feeding the cancer-killing serum into his left arm, the other intravenous tube pumping the painkillers into his right arm, and he couldn’t take his eyes away from the bruised and blackened skin. Every night when he went to sleep, he wondered if he would wake up. There were times when the pain got so bad that he wished that he wouldn’t.

Story of his life. Age ten—diagnosis of a particular kind of bone cancer, hard to treat. No donor, as his father wasn’t around. The elder Newell had died from the same kind of cancer when Bill was three years old. His mother wasn’t compatible.

The first round of treatment with chemotherapy had been deemed successful. As a child, he was told by his mother, when she was sober, “You have to trust the doctors.”

Trust—a five-letter word meaning sickness and tubes and barfing and more. Living at first in an oxygen tent to prevent anyone from infecting him, forbidden from going outside and being around others. “It’s not worth risking it,” the doctors had told him.

Not worth risking it. “So when can I go out?” he’d asked. Playing, just like the other kids, was all he’d wanted. Now, merely walking fifty feet took his breath away.

Those in the medical profession were professional liars. He’d get sick, get better, then get more medicine, get sicker, and then rebound once again. Finally, at the age of eleven, his disease had gone into remission.

“You’re well now,” the doctors had pronounced with satisfaction. Their job was over, and on to the next patient.

Well—a four-letter word meaning playtime. Running was something he enjoyed, so come junior high school, he went out for track and excelled. In high school, he made the track team again and started winning. Winning was where it was at.

Two months ago, he’d been at a track meet, ready to win once again. However, fate was a cruel mistress. The riddle of DNA being perverted by causes unknown manifested itself in something known as a mutation of his cells. It had happened again, although he wasn’t aware of the seriousness of it at first.

Denial was not just a river in Egypt, as the saying went. He’d gotten tired earlier than usual. Dropped off to sleep during class, didn’t eat much for dinner. No interest and little energy. “Too much practice,” his coach had said. “Take a few days off.”

Not happening, not now. Somewhere else, someone was practicing harder, or working out in the weight room, or running more. He’d forced himself to gut it out.

Reality crashed down around him when he passed out on the sidewalk halfway home. He didn’t remember his face hitting the concrete. He did remember waking up in the ambulance, though.

“You had some kind of seizure,” one of the paramedics had told him. Portland General Hospital was the closest care center around. Once there, he’d had the requisite blood tests, an MRI, and the results had come back positive.

His mother sat quietly in her chair, head down. It wasn’t from fatigue or stress. It was from a hangover. The odor of cheap gin emanated from her and threw a cloud of dissipation as well as despair over the room.

“Bill, I’m sorry,” Doctor Morton, the chief oncologist, said. “It’s the same kind of cancer you had when you were younger, originating in the marrow.”