The Lusty Adventures of Theseus (MM)

The myth of Theseus and the Minotaur has never been quite this steamy!

Handsome Theseus journeys to Athens to claim his birthright as heir to the throne, and along the way he meets the roguish Pirithous, who teaches him all about matters of the heart ... and body. After a saucy encounter with a male nymph, they at last reach the city, and Theseus is shocked to discover his father, the king, has a tradition of sacrificing youths to the Minotaur, the monster inhabiting the island nation of Crete.

Theseus soon discovers the king keeps a menagerie of mystical creatures hostage, and he must free them in addition to slaying the Minotaur and bringing his true love home to safety. Can Theseus successfully slay the beast, dethrone the tyrant, and save himself and his one true love? 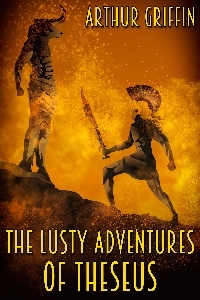 The Lusty Adventures of Theseus (MM)

“Well, look at these pretty little boys,” one of the centaurs said.

The fact that he spoke using the common language disturbed Theseus all the more.

“And even prettier cattle,” said another. “Look mighty tasty, all of them -- boys and cows. Don’t you think, brothers?”

One of them came up dangerously close and sniffed at Pirithous and Theseus. “Well, ain’t that something? I can smell rut on these two. They must have been fucking earlier.”

At that, the three centaurs erupted into jeers. “What, no womenfolk about to stick your peckers in? Had to find a last resort in each other’s asses?”

“It was no last resort, but a first choice,” Pirithous spat defiantly.

The centaurs barked out a chorus of insidious laughter. And then, in a move so fast it was over before Theseus saw it, the first centaur reared up and kicked Pirithous with his front legs, catching the young man on the shoulder and knocking him brutally off the horse. Pirithous hit the ground with a heavy thud and did not move.

Theseus, enraged, jumped into a crouch while still on the horse’s back and then propelled himself into the air in the direction of the attacking centaur. He hurled a thunderous punch that caught the beast square in the jaw. The centaur retreated several yards but stayed firmly on all four of his hooves.

His brothers immediately attacked, and soon all was chaos. Theseus fended the monsters off with a flurry of leaps and punches, but he had no weapon, and though his strength was mighty for a man, they also were gifted with strength, and there were three of them besides. Just as one would savagely kick him, another would do the same, so Theseus had no time to collect himself and bring up a defense. He fought as well as he could, but all was clearly lost.

One of them kicked him so hard in the abdomen, he lost all his breath and could no longer see clearly. He sank to his knees. The blow was such that it caused a whistling sound in his ear, which worried him until he saw something long, thin, and dark erupt through the shoulder of one of the beasts. The whistling wasn’t in his ears after all. Someone was firing arrows at the centaurs!

A blur of gold streaked across his vision and suddenly he could see again. A beautiful youth clutching a golden bow, his long yellow hair flowing, had come to Theseus’s rescue. He leapt into the air and smashed his bow across the face of one centaur. He placed a foot against the monster’s breast, then flipped away and landed onto the back of another as though he meant to ride it. He reached down to his ankles, where two long elegant knives with white handles were strapped. In one quick movement, he released the knives and plunged them into the centaur’s ribs, one on each side.

The youth then somersaulted through the air while simultaneously returning the knives to the ankle straps. He landed on his feet and immediately grabbed an arrow from his quiver and nocked it, taking aim at the centaurs.

All three beasts cried out in terror and fled, until their howls of pain and the beating of their hooves could no longer be heard through the trees. Theseus’s defender had vanquished his enemies in a matter of seconds.

Theseus shook his head to clear out the dark splotches from his vision, then finally beheld the youth.

For the first time, he realized he was nude, save for the quiver harnessed to his back and the knives strapped with golden rope to his ankles. He was tall and slender, with sinewy muscles that rippled beneath his skin as he moved. His face was beautiful, neither masculine nor feminine but seeming to be the best of both, with a strong chin and nose, full, curved lips, and no hint of a beard. Most noticeable of all, though, were the ears that peeked out between his long, golden locks, for they each rose to a clear point like the tip of an arrow.

“Pirithous,” Theseus croaked. He rushed to his friend’s side. Pirithous lay unmoving on the ground.

The golden youth knelt down beside Theseus and gingerly rolled Pirithous onto his back. He put his ear to Pirithous’s mouth.

“He breathes. He was knocked unconscious, but no other harm has befallen him.”

The boy delicately lifted Pirithous’s head in his hands and brought his mouth close as though to kiss him, but then he began whispering into Pirithous’s mouth. It was a strange language Theseus did not recognize, breathy and musical and strangely sensual.

“Theseus!” he said, and Theseus took his hand.

“It’s all right. The centaurs are gone.”

Pirithous looked around, his vision finally resting on the beautiful boy.

The youth stood and began walking around the vicinity, every now and then reaching down to retrieve sticks from the ground. Theseus couldn’t help but admire the perfectly round muscles of his buttocks, and he wondered why the boy traveled nude without even a chlamys cloak for protection from the elements.

“Ixion,” Theseus said. And then, in explanation, added, “We just met today.”

“My name is Daphnis,” the youth said. “These woods are my home.”

Daphnis smiled. “What gave me away?”

“You revived Pirithous with nothing but your words. I recognize a spell when I see one. And also ... well, your ears.”