The Making of a Lady

For the whole of his life, Viscount David Drummond has been groomed to inherit the title Earl of Falkirk upon the death of his father. However, instead of enjoying the manly pursuits expected by his father, he finds his every waking moment is consumed with the belief that he should have been born a woman and not a man. For David, it is a desire to compelling to resist.

After being caught in a compromising position while dressed as a girl, David Drummond is cast out of his family home by his father. With just the clothes on his back and a few golden guineas in his pocket, he escapes to London. There, he hopes to seek out a new life when his trust comes to him on his twenty-first birthday.

Through a letter of introduction, Lady Olivia Hamilton, the Countess of Weybridge, is apprised of his secret. For particular reasons of her own, she resolves to help David become Miss Isobel Munroe, the woman he always felt meant to be. Willing to brave the scandal of discovery for a chance to be true to herself, Isobel becomes a reality, and with the help of Olivia and her friends, she begins her new life. She even finds the man of her dreams, Lord Peter Fairfax, a gentleman in need of a wife as special as she. Everything is coming together, or so it seems. But Isobel can't escape her past so easily, for someone is seeking David Drummond--someone who wants him dead. 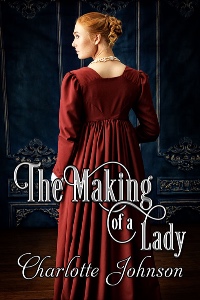 The Making of a Lady

Malcolm Drummond, 7th Earl of Falkirk, lay awake in his bed, even though he should have been sound asleep. On retiring that night his mind had been clouded due to the wine and the whiskey he had consumed at dinner, and by rights he should have slept soundly until the morn. But something had disturbed his alcohol-induced slumber, something intangible, unknown, and now sleep evaded him. Groaning, he turned and fumbled for the full hunter fob watch that hung on the stand beside his bed, pressing the button that ordered the tiny bells within to chime the time…a quarter past the hour of three in the morning.

“Fuck,” he whispered as he rolled over once more.

The earl sighed, his hand bashing his down-filled pillow as he turned over in his bed to seek out a comfortable position. Then a fox barked in the distance and Malcolm laughed out loud.

That must have been it! A blasted fox!

Relaxing a little with that thought, he rolled over once more, this time onto his front, his bloated body pressing down upon his very full bladder. Again, he laughed. Perhaps needing a piss was what had awoken him after all. With a pounding head, he clawed his way out of his bed and lifted the front of his nightshirt. He took himself in hand, and a stream of piss was soon ringing into the chamber-pot that was kept under his bed, a sigh of relief hissing from his lips as he emptied his bladder. Then his eye caught sight of flickering candlelight reflecting from a crystal decanter that stood on a table by the window.

The whiskey called to him. Staggering over to the table, he poured himself one last glass and pulled back his drapes a fraction to peer out into the night whilst he sipped at the fiery liquid. His rooms were at the back of the manor house, overlooking the stable block below, and at first, everything seemed quiet, everything seemed as it should…That was, until he saw the unmistakeable flicker of a lantern being carried across the stable courtyard.

Finally, there was the truth of it! One of his favourite horses, aptly named Midnight, was due to foal at any time, and the earl grinned drunkenly as he watched his head groom, Hamish Russell, disappear into a stable. Midnight was a superb brood mare and her soon-to-be foal had been sired by no less than Apollo, a magnificent Arabian stallion owned by his friend and neighbour, Lord John MacDonald. Not only would the foal have the pedigree of a champion, it was sure to be worth a pretty penny, too, and its birth was something the earl did not want to miss. That had to be it. Russell was, by nature, a lazy bastard, and the earl knew that the only thing that could possibly have dragged the man from his bed was the imminent delivery of the foal.

In his inebriated state it took some time, but by the light of his candle, the earl dressed himself simply: trousers and shirt, and a pair of stout walking boots that he kept in his room for such an occasion. Then, after throwing his robe over his shoulders once more, he slipped out of his room and made towards the staircase at the back of the house, a staircase that led directly down to the kitchens. As he imagined it would be, the kitchen was deserted, the room still warm from the fire that cook had carefully banked in the stove. Striding purposefully across the flagstones, he made his way to the outside door, only pausing for a moment when he discovered it to be already unlocked and unbolted.

Quietly and with mounting excitement, the earl lurched towards the stable block, the bright luminescence of the full moon making it easy for him to find his way in the darkness. But as he reached the door through which the weak light shone, something made him freeze, his whole body becoming motionless. He had expected to hear the sounds of a horse in labour, perhaps the soft encouraging tones of Russell, the head groom and midwife to Midnight. Instead, coming from behind the door were the unmistakeable sounds of a man and woman enjoying each other’s pleasure: the steady slap, slap, slap of flesh on flesh, the deep grunts of man in the heat of passion; the soft moans of his woman urging him on.

“The cheeky bugger,” whispered the earl. “Russell must have a lassie in there with him.”

Smiling lasciviously to himself, the earl took a step forward and put his eye to the crack in the door. He recognised his groom almost immediately, for he was a giant of a man, his breadth of shoulders alone making it obvious as to who it was. The man was down on his knees amongst the freshly laid straw, his back towards the earl, the kilt he habitually wore hiked up to his waist exposing his massive hairy thighs and naked backside. And, as the earl had suspected, Russell was pounding away at a woman who was on her hands and knees before him, his hands gripping the girl’s hips to pull her in each time he thrust forward.

Because of the angle of Russell’s body, it was difficult to see who he was with. However, one thing was for certain—the woman was young, and judging by the way she was dressed, was no commoner either. The dress she wore appeared to be of fine cotton, the skirt of which was pulled high over her back to reveal long, graceful legs encased in the finest of white woollen stockings. Her body was slim, almost prepubescent in form, her breasts so small they were invisible beneath the bodice of the dress she wore. As she braced herself on graceful arms, she held her head low, her long red hair hanging loose over her face and concealing her features, and the earthy noises she was making left no doubt that she was enjoying being fucked this way. So obviously near his peak, Russell began to pound even harder into the woman and, fascinated, the earl watched as the woman moved a hand between her legs to pleasure herself there.

Only then did the earl look on in confusion.