Lumbered with a world-famous hippie artist for a mother, Etheria Goldsmith gravitated to the opposite extreme. As cynical and materialistic as they come, she's pissed off -- to say the least -- when said mother enrolls her on a loopy Goddess Meditation retreat in some ancient mansion in the middle of nowhere.

Things only start to look up when Etheria discovers the participants will be meditating in the nude, since ogling naked females is one of her favorite pastimes. Even better, she finds herself grouped with a Tantric sex expert named Katie Drake.

But Katie is on an undercover mission, digging into the twisted truth behind the meditation retreat. The drama culminates in a string of spooky murders ... and Etheria and Katie find themselves locked in with the murderer! 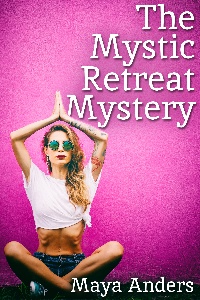 The room descended into silence. I closed my eyes and strove to visualize the Goddess. I spent maybe two seconds doing that before my mind drifted off into the kind of sexual fantasies it usually indulges in. Who cares -- it’s still creative visualization, isn’t it? I pictured haughty Professor Burgess ordering me to kiss her sturdy buttocks, which I proceeded to do with enthusiasm, before burying my face in the soft warm cleft between them. Then I was burying my face in the soft warm cleft between Crystal’s massive mammaries. More speculatively, I wondered about Zuzana’s equally large, but much less natural, breasts. Would those enormous globes feel as hard and rigid as they looked? And talking about hard and rigid, my mind drifted onto Raven and Gerda, with their firm bodies and stiff, testosterone-boosted clits. I’d gazed at them in fascination dozens of times in their streaming videos, and now I was just a few feet away from both of them ...

My reverie was interrupted by the clanging of the gong.

Serena clapped her hands. “We will go round the circle in the same order as before. Let us hear the results of our experiment in creative visualization.”

Crystal spoke first. “I saw the Goddess in a sparkly, iridescent fantasy landscape. She beckoned me into a mystical grotto, where there was a deck of Tarot cards laid out. At her invitation I turned three of them face-up. The cards were the High Priestess, the Tower, and Death. I failed to penetrate their meaning, although I knew they had some deep significance.”

Then it was Zuzana’s turn. “I relived a moment from my own past, when the Goddess appeared to me many centuries ago, in medieval Carpathia. I was a beautiful young countess in those days, and I made a pact with the Goddess to stay that way forever. That was the day that I became a vampire.”

Belinda came next. “I saw the Goddess very clearly,” she said, adjusting her glasses on her nose. “But she didn’t look like any depiction of the Goddess I’ve seen before. She looked just like you, Serena-guru.”

“Copulating, that’s right,” her partner Gerda agreed. “I visualized the Goddess as a vast all-embracing yoni, swallowing the universe into its depths.” She cast a quick glance in my direction, then apparently decided that further explanation was needed. “Yoni is the mystical word for vagina, of course.”

“Of course,” I agreed, though I’d never heard the word before. “I saw all that stuff too. Yonis, vaginas, clitorises, breasts, buttocks ... you know, all the usual Goddess bits.” I was amused to see several of the others nodding sagely at this synopsis of my sexual fantasy.

The circle finished with the hairy little witch, Katie. “I visualized the Goddess as a wise woman,” she said. “She told me to be careful, because people are not always what they seem.” Her eyes darted round the group.

I was taken aback -- was she talking about me? Did she know I wasn’t really a ... whatever it was I said I was? Then I realized that pretty much everyone round the circle was looking a little guilty. Maybe I wasn’t the only one who had been telling untruths.