The Name on My Wrist (MM)

James, middle-aged, is given to one-night flings with younger men in whom he searches for someone he lost long ago. A random comment by his latest catch draws his mind back to the past, to a boy he once loved so fiercely, a boy drafted and sent to fight in Vietnam. A boy lost in the war. A boy James has never forgotten.

Warning: This is a very sad little story. It's also one of my best. 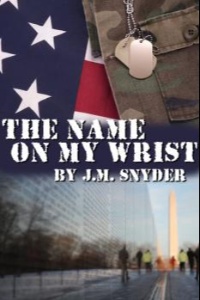 The Name on My Wrist (MM)

Heat Rating: Sweet
Word Count: 2,637
8 Ratings (4.6)
Bittersweet/Tragedy Contemporary Gay/Lesbian
In Bookshelf
In Cart
In Wish List
Available formats
ePub
HTML
Mobi
PDF
Cover Art by J.M. Snyder
Reviews
I love this book. It is sad. I cryed, I coulnt help it. It makes me want to hold on to my loved oned with all my heart. I kept reading it over and over. It has a deep meaning. I love it.Oh God howmuch I love this book.
QueenCamelle
Read more...
Excerpt

The room is dark and I can feel his awkwardness like a loaded gun between us. I haven't known him long but he's just the way I like them -- younger than me and blond. He's one of the guys I've come here with this weekend, at this house along the beach, and he's so full of energy, like I used to be. He reminds me of someone I used to know, someone I swore I'd never forget.

He's in his twenties and out among our friends he's all talk but in here I feel him tremble beneath me -- I touch him, kiss him, lay him back to the bed like I've done with dozens of boys before, whispering it'll be okay, and I know he's just as nervous as I once was, years ago when Don breathed against my neck for the first time, told me he loved me, it'd be okay. I don't say the word love now, this isn't that, it's nothing like that. I don't even remember this guy's name.

When he fumbles with his jeans, he catches a glimpse of the bracelet I wear around my left wrist and laughs anxiously. "This won't be too much for you, will it?" he asks.

I pull back, not sure what he means.

He points at my wrist. "That one of those med things?"

It's a POW-MIA bracelet, I explain. Means I lost someone in the war. Means someone I loved never made it home. Pvt. Donald L. Jones. I trace the name with my finger and for the first time in a long while, I really see the bracelet -- I've worn it so long, I barely feel it anymore, it's become a part of me, like a wedding band or a cross around my neck. But now I squint in the darkness and see the engraved letters; I see the boy behind those words. Nineteen and amazing. Invincible. Mine.

Another nervous laugh. "Just so you don't have a heart condition," he says. He reaches for me but the moment's lost, I'm lost, back to a time when I was younger and only had one man, one love, who was everything I ever wanted a boy to be.

Is It You? (MM)
Tinnean
In Shelf
$0.00
Tweets by
sirenbookstrand