Savannah Price is looking forward to returning to her favorite summer time job: camp counselor at her father's petting zoo and wildlife rescue center. Ever since her father's death, the twenty-something has looked forward to revisiting the grounds and all the animals she's come to love so much and know so well.

When she can't sleep the night before the camp opens, she runs into Mike Cavanagh, a former counselor and know-it-all annoying goof who has now grown into a stunning man with insight into her father's upcoming plans for the zoo. One of these plans was the "Night Tour" complete with night vision goggles, which Mike invites Savannah on.

The tour leads them both to some unexpected places, and Savannah soon finds herself thinking of Mike in a new way. Maybe knowing-it-all has some advantages, especially if Savannah reaps the benefits ... 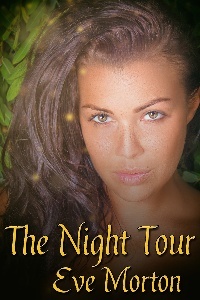 Mike let out a startled cry, but his hands acted quickly and moved to her waist in a soft embrace. She could feel his heat now, and hardness, against his shorts. She closed her eyes and envisioned their bodies as orange passion, radiating light.

"Savannah ..." Mike ran his hands up and down her back. He surely sensed she was not wearing a bra. She felt him grow harder against his shorts, then against her skin as he shifted, and part of his cock slipped out. He said her name again, as if it was a charm. "Savannah ... I don't know ..."

Mike shifted. He still kept his hands and body on hers, but he was clearly thinking something over in his head. Seriously? she thought. Ugh. This was frustrating. Why did he suddenly grow modest? Why couldn't he be that know-it-all like he'd always been?

"Consider this," Savannah said, her tone taking on the arrogant stance that he'd once possessed, "human beings experience a profound rush after orgasm as our bodies release endorphins. So what I'm proposing is better than a night cap to get me sleeping. To get us both rested. And then maybe in the morning, we can talk about plans for making this night tour a real thing. Maybe even for the campers, since there is so much to be learned from these experiences."

"Seriously?" Mike asked. "Without this ending though, right?"

"Yes, definitely." Savannah laughed. Just as she did, the monkeys made the same noise as before. She tried to suppress the urge to guffaw, but it was too hard. The noise they made was really funny. She was soon trembling in Mike's arms, and he was laughing, too. He never once took his hands off her body. He drew her closer, as if the answer was now suddenly clear to his quandary. Now he had the answer: he placed his palms on her chin and cheek.

"You're stunning," he said.

"But I know how you look in daylight. That doesn't change here."

Savannah wanted to say that it did, of course it did. Everything at night was so much more different than in the day time -- but she was quiet. She opened her mouth as Mike met hers in a kiss, and she fully let the night urges take over.