Number Eight, a teen trained to be a warrior, escapes from a shadowy place known only as the Facility. He has no memory of his past and only wishes to discover who he is and where he is going. Enhanced with exceptional strength, speed, and aural ability, he stumbles upon a small circus sideshow act that calls itself the Oddities.

And oddities they are. Small-Tall can change his height. Feet can hurl knives with unerring accuracy with only his toes, Lips uses the power of wind, and Grace can generate the heat of a small sun. Yet, they hide their true powers for fear that the government will deem them a threat.

Number Eight adopts the name Nick Andimer as a cover. Afraid that the members of the Facility will come after him, he needs a place to hide, and the Oddities accept him as their resident strongman. They travel from place to place, living an itinerant lifestyle, all the while pursued by those who don’t have their best interests at heart.

Soon, the members of the Facility catch up with them, and Nick must fight for his future as well as for the only friends he’s ever had. 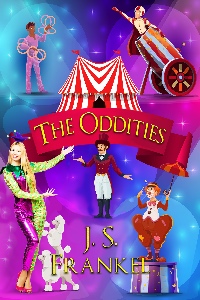 The knock came at the door quite unexpectedly. At night in the Facility, the rule was lights out after ten and no talking or visiting. That rule had never been broken, as far as Eight knew.

Since he’d expected solitude, the sound surprised him. He’d been sitting on the edge of his cot, thinking about the day’s events. Another knock, louder this time, came along with a hoarse whisper. “Hey, Eight, it’s me, Number Four. Open up.”

Eight heard the sound but didn’t move, as his mind was replaying that morning’s training scenario. He’d erred, although he couldn’t understand how. Perhaps it had been over-eagerness or impulsiveness—perhaps.

The Facility didn’t encourage anyone to second-guess themselves. The instructors always admonished, nay, ordered, their trainees to fulfill their mission.

It didn’t matter if said mission consisted of sparring against another trainee, completing the last rep of a set, or running to the bathroom. Maximum effort had to be given at all times.

And Number Eight had always given maximum effort. He’d received top marks ever since he could remember. Admittedly, when he stopped to reflect on his past, he couldn’t recall much.

In fact, to his astonishment, he couldn’t recall if this complex had another name. Everyone called this place the Facility—facility with a capital F. He’d never heard of another name being used.

He called this place home—the vast, snakelike underground where he ran laps every morning with his fellow trainees. The warehouse-sized training area was where he lifted weights or sparred, and the tiny cafeteria was where he ate a mystery meal of something that passed for meat along with vegetables that were limp and tasteless.

And this room, a spartan affair, thirty-by-thirty feet square—that was all he knew as well. A simple box with no window, stale air hissed through numerous vents in the ceiling.

The cot upon which he slept, a small dresser where he kept his clothes, and a mini television were his creature comforts, along with a calendar that marked the passage of days.

A combo toilet-shower lay at the rear of the room. The water was always cold. Nothing else that indicated luxury was in the room. Eight never thought of asking for anything more.

Every morning, an alarm that sounded like a monkey chattering in anger went off promptly at six. Eight woke up breathing fast and feeling weak, but he chalked that up to lack of nutrition and the strict regimen he followed. The Facility liked to keep its trainees’ reflexes, strength, and fighting skills ho ed to a fine edge.

Before and after training, though, came eating, and that, while necessary, was something he never looked forward to. His instructors said eating was a pleasurable experience.

His personal experience was that it wasn’t. For him, outside of the mystery meals, another source of food consisted of sickly yellow tubes containing a thick paste that congealed in his gut and took a long time to digest.

Only that morning, his training had consisted of facing off against the Crippler—a nasty, multi-armed robotic device eight feet in height and four feet in width that mimicked the fastest moves of any martial artist around. In the words of his leader—X—“Beat this if you can. You can’t.”

X oversaw him and all the other trainees. No one had ever met the man save the instructors, but Eight knew him through his smell, a distinct odor of peppermint and a fruity smell, as though he’d bathed in something overly sweet. The smell manifested itself when he came to observe the training.

As for the Crippler, no one had ever defeated it. It frustrated Eight. He’d beaten every other trainee in hand-to-hand matches. He’d scored perfect on every weapon’s test.

However, against the machine, he felt like an amateur. Its arms moved in a continual blur. It seemed to anticipate his every move. That morning, he’d ducked and dodged and blocked and parried, and he’d still lost. The device had pinned him in less than a minute.

“Enough for now, Number Eight,” X had said from a control booth above the combat area. Swathed in shadow, it blended in with the general dimness of the rest of the complex.

“You did well, but this machine is the ultimate offensive weapon. It reacts to its opponent’s moves faster than anything around. Whenever someone makes a move, it responds. No one can beat it.”

Eight thought about it. “Does it have a weak point?”

X hiccupped, one of the rare times he showed any kind of surprise. “Odd that you should ask me that. Yes, it does. It’s off now. Check it out.”

Eight patted the machine here and there and found a slight opening where its left leg joined the lower part of its torso. He pointed at it. “Here?”

“Well done, Eight. Yes, that’s the access panel where the neural processor is. The back of the head was too easy a target. Congratulations. Now, rest up.”

Eight went back to his room, beaten and bruised, yet pleased that he’d learned something. As he sat on his cot, he thought about his name. He had none.

Instead, he had a number, so X had proclaimed. “You are all equal. Numbers promote equality. Get used to it.”

Eight had gotten used to a lot—the training, the food, and the cuts and bruises. Fortunately, he healed exceptionally fast. His battle against the Crippler had taken place at exactly eleven AM. It was now thirteen hours later.

A small mirror lay above the sink in the shower room. He examined the spots where he’d been slashed. The cuts he’d received had bled profusely. Now, they’d vanished. The pain had also disappeared hours ago.

In terms of features, he didn’t look much different from the other trainees, save his hair color, which was dirty-blond. Everyone else’s hair was black.