The Old Man at My Door

A winter storm warning blanketed the local news stations before the blizzard itself. This blustery Saturday was going to be sweatpants, banana bread, and a Golden Girls binge for Renata Todd. But at her farmhouse door, already flocked with fresh snow, comes an unexpected knock: Albin Lawrence, an old man who grew up in the house in the 40s and 50s.

Renata’s caution yields to common sense as she welcomes him in for a tour. What danger could a shaky man over eighty, who has only one arm, represent?

Albin’s reluctant to leave and eager to talk. As Renata welcomes him into the kitchen to, he takes a barstool to tell his story ... his stern parents’ suspicions of his homosexuality; the day he fled with his parents' savings, never to return; navigating the decades of secret bars, marginal jobs, free love, questionable choices, and AIDS; and a relationship truncated by social pressure and tragedy.

As the episodes turn darker, Renata begins to uneasily suspect something more is afoot. 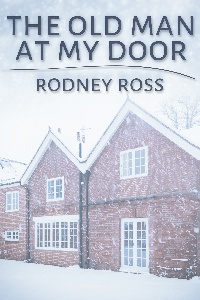 The Old Man at My Door

His bow seemed to be in deference, so deep that he had to right the earmuffs that dropped on to his forehead. His enunciation was loud, but the KN95 mask still muffled his greeting.

I could see the knock-outs in the snow behind him, his imperfect path from whoever dropped him there. There was one large smudge among them, a convulsive snow angel. He had sprawled out in a fall; I detected a patch of muddy wet snow on the hip of his gray wool coat and his knee.

“Ma’am, I grew up in this house, my father, mother, brother, and me. I wasn’t technically born in it, but close enough; my father got my mother to the hospital with only minutes to spare. I left right around Labor Day in 1959 and, while I was tempted, I have not been back since. I thought I had made peace with it all, but I need an ending. I say ending because I love movies, all types. I tend to look back at my life as something projected on a screen. I was hoping to see this house again before I get to the final credits.”

Delivered so deliberately, he had clearly memorized his metaphoric introduction and poetic request.

He wiped his nose with his gloved hand. “My name is Albin Lawrence.”

“Come inside, Just Albin,” I offered, as he knew I would.

Impulsive behavior is not a trait I am know for, so why was I doing this? But, after a preamble like his, who would strand an elderly man on a doorstep in twenty-two-degree weather? But I was also wondering: was this some gag, a set-up, a misdirection?

“I’ve been vaccinated, and boosted,” he declared.

As he did, Albin was almost hopping. I realized he was carefully seeking somewhere in the foyer to wipe his feet. His shoes, or rather their rubber coverings, betrayed their age, veined with salt stains, and desiccated at the seams, and snow was sliding off on to the hardwood floor. I offered to take his coat and pointed to a Chevron rug.

“I think maybe you fell out front.”

“A little. I misjudged the depth, ma’am.”

When he smiled, I thought I could hear his dry lips actually crackle. Albin had been handsome when young. His cheekbones were high, what remained of his hair was wavy and fell into a gentle part and his blue eyes were like the water in the Florida Keys and eerily direct.

This was when I noticed that no hand was visible below his left sleeve, which bore cuff links, and when he removed his coat, why: his arm was missing past the elbow but before the shoulder, and his shirtsleeve had been neatly folded into two equal panels and affixed with a stickpin. A gory interlude in The Walking Dead notwithstanding, I’ve never been especially squeamish about a missing body part, and less so after my own simple mastectomy. Its twin remains, but breasts aren’t working appendages, and the removal was a medical decision, terrifying but absolute: live, or die. What a burden this must have been for Albin, more so given his age; things like getting dressed and bathing were probably a challenge. But he had layered festively -- a white shirt, a navy blue vest, an unexpected white and baby blue polka-dot bowtie, khaki pants with perfectly-creased pleats. His intent was to make a favorable impression.

“Step on through.” On the hall tree I draped his coat; the loose lining, I noted, need restitched. He followed me into the living room. “Please. Sit.”

Albin went to the rolled-arm Chesterfield sofa, carefully moved too many fringed pillows, and sat on the middle cushion. “This is nice leather!”

“The manufacturer calls it buttery,” I laughed. “Where did you come from, Albin?”

“The Saint Kate. I went there after my flight arrived. So arty and beautiful!” he exclaimed.

“When I asked where you came from, I meant in the more permanent way.”

“An Assisted Living community called At Water’s Edge in middle Ohio. It’s named that because it’s situated on a river. It’s very nice. I have an actual apartment. It even has a kitchen, but no stove, just a microwave. Old people have been known to set themselves on fire.”

“Do they know you got on a plane and took this trip to your hometown?” I inquired.

Albin’s chide sounded hurt. “It’s not like I have a keeper. I sign out and can come-and-go. It’s not like I’m gallivanting around. I’ll take an Uber to check out whatever’s new at the movie theatre. I go to the matinees, usually by myself. I might do some mall-walking with a big, salty pretzel as my reward.” Maybe his wink was a tic. “We have a computer library. I bought my airplane ticket on there. I had a lot of time on my hands to stick key words into the search engine and look up things during the COVID lockdown. Outsiders were prohibited. I didn’t have any, anyway.”

A simple admission, with no self-pity: no visitors came to see him.