Christmas joy is a matter of perspective. For some, it’s the happiest time of the year. For others, not so much.

Twenty-nine-year-old Mick, the son of crack addicts, isn’t exactly a dyed-in-the-wool Scrooge. Mick’s been on his own from childhood. As a teen, he even lived in a shelter, where for a short time he had a boyfriend.

After the boyfriend left, Mick squatted in the historic Orpheum Theater. While living there as its self-appointed custodian, Mick has watched others celebrate the holidays from a distance, never able to share in their merriment.

Only his Technicolor dreams enliven his dull, clandestine life until one day the world around him begins to change.

Mick is surprised when a man named Jim buys the Orpheum and plans to restore it. Something about Jim rekindles Mick’s longing for a better life and a little holiday magic for himself.

Can Jim give Mick the hope he needs to accept his happily ever after? 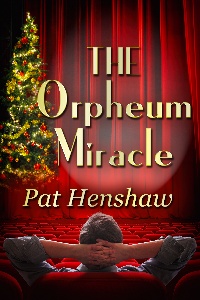 For the past few years now, I’d sit like this, middle of the center row, shoes off, three pairs of socks, blanket bundled around me, feet and legs over the seat back in front of me. Sometimes I ate the leftover popcorn, sometimes not. I didn’t ever steal, so no candy, hot dogs, chips, or anything I wasn’t entitled to.

I’d sit, relax, and run my own movie, my mind movie. Sometimes it was a romance, with me meeting the perfect guy. Usually, he was walking by the Orpheum and a heavy rainstorm or windstorm blew in and he had to get out of the elements. Sometimes he’d run into me as I was cleaning up the lobby, maybe spilling some popcorn he’d just bought.

Our eyes would meet, and that’s all she wrote.

I knew about this kind of soul-to-soul meeting firsthand. There’d been this kid, Randy, in the shelter a year after I first landed there. We were sixteen and stupid as rocks. One glance and we connected on all levels. I couldn’t look him in the eyes most of the time, or I would forget what I was doing. Shit, I’d even forget my name.

We were together for what felt like a long time, but it was probably less than a year. Then, wham, bam, Randy was gone. Booked out of the place like he’d heard his ultimate booty call or found an actual Christmas somewhere else. I was fucking heartbroken and grieving.

Some of the other guys at the shelter said an old lady adopted him and called him her grandson. Pipe dream, but we all had them. Another group said he’d been picked up for soliciting, but I knew that one wasn’t true. He and I had been virgins. Easier to believe he was adopted, right? And the final group buried him. I cried myself to sleep many a night, praying that one wasn’t real.

So back in the Orpheum at bedtime, romances were my all-time favorite dream fare. My second favorites were homemade domestic comedies. Me, the dad of a brood of spritely boys, and husband to a goofy, well-meaning guy, whose day job working in an office was driving him nuts. We’d take the boys on camping trips and tell stories around the fire. We’d teach them all the stuff we’d learned as we grew up.

My husband, who grew up in a white-picket-fence-type family, would give them tips about being good, upright citizens. I’d pass along all my street lore. Where to find food that isn’t too tainted, where to find shelter, who to trust -- no one -- who to stay away from -- everyone. My husband would tell them about fairy-tale hopes and dreams, about Christmas. I’d ground them with a reality where hopes and dreams only happened on film. Our lives would be paradise.

I liked watching my homemade DIY romances and domestic comedies. I could fall sound asleep, only getting up a couple of times to stretch my legs and take a piss. On those nights, I’d wake up rested, ready to meet the day, hardly missing breakfast or a real meal. Over the years, Randy, like some of my wilder hopes and dreams, faded. I wished I could remember what his face looked like, but after all this time, it was just a hazy blur, never coming into focus. No matter. My hero wasn’t so much a face as the feeling of being protected and happy.