The Penalty for Holding (MM)

When the playboy quarterback of the hapless New York Templars is injured in a freak sexcapade, backup QB Quinn Novak picks up the ball and takes the team to the playoffs. There he attracts the attention of two other quarterbacks who’ve been rivals since high school, Mal Ryan of the Philadelphia Quakers and Tam Tarquin of the San Francisco Miners.

Quinn begins a volatile relationship with the narcissistic Mal and a loving one with the open-hearted Tam, keeping each secret from the other. What he doesn’t know is that the two have a complex sexual history of their own. 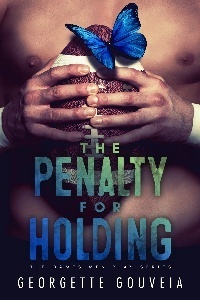 The Penalty for Holding (MM)

"I was wondering how you're going to spend the day?"

Quinn was startled, not because he had no plans but because people rarely asked him anything personal -- how he was, what he was doing for lunch. He was so used to being on his own, entertaining himself, or caring about others that he was both pleased by Tam's interest and ashamed at how emotionally one-sided his life was.

"I thought I'd do a little sightseeing, take a little time to relax. We rush from city to city so much during the season that I thought it'd be nice to stop before catching a flight back to New York tomorrow."

Tam grinned. "I'm the same way. I like to get to know a place, even during the season, else what is this life for?"

And so it was that Quinn found himself driving with Tam improbably to the Grand Canyon. Quinn didn't have an overwhelming desire to see it. Even when he found himself before this cathedral of God -- humbled by its vast, terra-cotta, prehistoric mystery -- he could conclude only that it was very Grand Canyon-y. But he loved being on the road -- especially with Tam. It was Tam who made it different, Tam who made it seem exciting and new. Later when he was gone, Quinn would remember something that being with Aunt Lena had taught him: It wasn't where you went or what you did but whom you were with.

"Think of all these rocks have seen," Tam marveled. "We come and go. They remain."

Tam notwithstanding, Quinn didn't quite see it that way. He saw the remnants of a river -- soft in its overwhelming power, powerful in its soft currents -- that had carved fissures in the earth over time. People were like those now-phantom waters, wearing away the bedrock of your soul.

Not Tam, though. He didn't have it in him. There was no malice about him. How Quinn longed to present him to Mal, Smalley, Sydney, and Chandler -- indeed to the whole world -- and say, here's my lover. He's kind and funny and sweet and gentle and he chooses me above all others. Me.

It was just a fantasy, of course, wasn't it? When Tam said that he had put his family on a plane for Philly in the wee hours of that morning -- how blissfully normal they sounded, with their medical practices and teaching positions to go home to, Quinn thought with a sigh -- he wondered if there were a girlfriend on that plane, though Tam didn't mention one. He would've mentioned one if there had been, wouldn't he?

Of course, if there were a boyfriend, he would hardly have mentioned that. Besides, Mal -- who flew away, perhaps even on the same plane, as easily as he flew into Quinn's life -- would never let him go, particularly to a hated rival. Mal would not quit the field that Quinn would become. And even if he did, where was the place for Tam and Quinn amid the brutal beauty of the NFL?

"You're the first person I've seen shiver in the desert," Tam said later back at the Sonora Inn.

"Oh, that," Quinn said, covering for his desire and fear. "That's because I'm in awe of your prowess at miniature golf."

"And well you should be," Tam said, "because I'm the Jordan Spieth of the mini course. Let me show you something."

He lined himself up with a shot at a tiny windmill. Then he took a beige print bandana from his pocket and tied it around his eyes. He paused, oscillating the club, and putted: Tam came within an inch of the hole, a wondrous example to Quinn of how a superb athlete retains a sense of his body even in sightless space.

He tied the bandana around Quinn's eyes loosely, then guided him to the hole.

Moving behind him, Tam directed Quinn using only the voice that commanded the best O-line in the NFL. How to describe a voice, Quinn wondered? It was as ineffable as music and just as indispensable, something that was often overlooked in a visual culture, and yet that worked its magic nonetheless subliminally. Tam's dusky baritone was like everything else about him, easy and fluid.