The Poet and Her Muse (FF)

In the middle of the city is a second hand bookstore run by Jess, an overworked poet with a saviour complex. She has been working at the store ever since her uncle retired and had to drop out to run the family business, but as bills mount and wages drop, she’s beginning to lose the passion she once had for poetry. Until, that is, she comes across a mysterious drawing in one of the books, one that inspires her to write again.

Meanwhile, her best friend Natalie struggles to help Jess fight through the stress of keeping her family afloat. They are two opposites, with different classes, families, and interests, but are brought together by their love for each other, even though neither will admit it.

More and more drawings appear, intriguing Jess and giving her the drive to change her life for the better. Little does she know, the illustrator is closer to home than they first seem ...

Will Jess be able to find the illustrator and get her life back on track? Or will she lose everything, including Natalie? 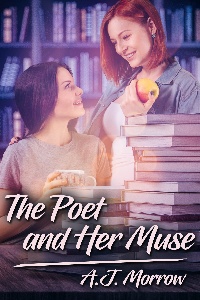 The Poet and Her Muse (FF)

She flipped open the book to a spot where one of the pages was folded over--that wasn’t uncommon with many of the older books, they were second hand, after all, but she hadn’t noticed any dog ears before. Usually she tried to fold them up before she put them on the shelf.

The fold was at the end of a chapter, where there was a large blank space, devoid of any text. Devoid of markings, though, it was not, as there was an illustration taking up most of the spare space. Jess stared. It was the same type of clean pencil markings as the day before -- made by a steady hand, with no evidence of eraser marks -- though this time it was a set of two portraits, a mirror image of each other. Two men -- one whose cheeks were plump and his expression pained, with flowing hair and a neat, Victorian cravat. The second man’s face was sunken, his brow twisted with cold rage, and his hair was slick back. Frankenstein and his monster; so different and yet so similar.

It reminded her of a poem she’d been writing -- she’d finished the first draft and even shown Natalie, but had never gotten round to editing it. It was a pity, really ... Jess shut the book.

Now that there were two illustrations, the idea that they’d come from a previous owner seemed unlikely. Not impossible, but she was pretty sure she’d bought both books separately. So, then, where had the drawings come from? She couldn’t think of any of her staff who were particularly artistic, and she didn’t think any of them would do something as careless as that. The illustrations definitely counted as damage, after all, and would lower the price of any well-kept books. Jess shook her head. The whole thing was so strange, but she could think more about it later. Maybe it wasn’t anybody in the shop, and it was just pure coincidence that both books had been owned by the same person at one point. Stranger things happened.

She called over to Casey to ask if she could restock the pile of books whenever she got the time. Jess was far too busy to do it herself -- she had at least three phone calls to make that day, and she had to finish the bookkeeping -- but she decided to replace the copy of Frankenstein herself.

The classics section was at the far end of the store from Children’s Lit, and S for Shelley was quite high up, for some reason. Jess had to reach up on her tiptoes to even be able to touch the edge of that shelf. She cursed beneath her breath and glanced around, hoping to find one of the many stools they had dotted around for this very reason.

As her neck was craning around, Jess felt a sharp tug at her hand. The book was gone.

“Wha --” she started, spinning round to see whoever it was who’d snagged the book from her.

“Hey there, stranger,” said Natalie, a smile dancing across her lips. She took the book and placed it in the spot Jess had been reaching for.

“A thank you would be nice.”

Jess bit her lip, blood rushing to her face. “Thank you.”

“You’re welcome,” Natalie replied, “did you forget about our coffee date?”

Jess felt her heart jump a little at the word date. Of course, she knew Natalie meant platonically, but still. Her little gay heart could dream.

“No, no, not at all,” she began, hoping to hide the stammer, “I’m just super busy, the time totally got away from me.”

Jess glanced at her watch -- her break was meant to have been fifteen minutes ago.

“Well, do you know when you won’t be busy?” Natalie asked.

“Give me five minutes. I’ve just got to make this one call and then I’m all yours.”

Natalie nodded, smiling in an exasperated but still loving way, and waved as Jess ran into the backroom to make the call.