The Prince Of Keegan Bay

When the American born heir to the kingdom of Kushawa is hidden in an age-qualified retirement community, a battle of wits and tactics develops between the Kushawan Alliance of Royal Princes (KARP), determined to eliminate the infant, and a group of senior citizens, The Blenders, equally determined to save him. Doll Reynolds pulls the residents into a unified group while the baby's mother, Moira Robbins, risks her life to lure the KARP assassins away from her child. 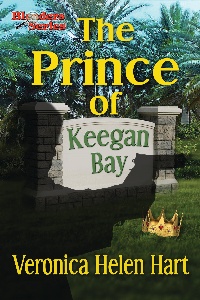 The Prince Of Keegan Bay

She drifted off to sleep, only to wake again suddenly, sitting bolt upright, her heart racing.

The German Shepherds barked right outside her bedroom window. Her closet door creaked. Someone was in the room with her. Moving slowly, she reached under her pillow to pull her Smith and Wesson Model 66 from under her pillow. She slid it down by her side, index finger on the trigger. Perspiration oozed out of every pore of her body. She dared not breathe. In the faint glow of the moonlight, she detected a dark form move toward the door to the hallway.

Her mind raced, seeing black-clad men in every corner of the room, swarming over her, smothering her. Maybe her mother was right, nobody was looking for her; it was her over-active imagination and this phantom in her room was part of another bad dream. In one dream little Ham was being tossed from one villain to the other across her bed just out of her reach.

The dogs’ barking turned to low growls. They sounded like they were almost in her bedroom Tears wet her face. I can’t go on! I can’t do this, Hamid. Why did you have to die? Why? A silent question, a useless cry into the void. Should she shoot the intruder now? Though she’d learned how to use a gun as a young girl, she’d never actually shot at any living thing.

Whoever it was didn’t realize she’d awakened. The odor she’d detected earlier permeated her claustrophobic bedroom. The shadow moved on into the hallway. She slowly leaned forward to watch the silhouette advance toward her kitchen.

Sliding quietly from the bed, she eased her way to the hall and stuck her head out far enough to see what the man was doing. Using a small flashlight to guide him, he had reached the desk connected to the end of her kitchen counter and was rummaging through the drawer. He was dressed in black, looking like a paper silhouette against the light. Her heart stopped.

He dropped the papers and turned toward her. “You will be coming with me,” he said with a trace of a middle-eastern accent, reminding her of Hamid. “And now I have the evidence of your child, I shall find him and be richly rewarded.”

He couldn’t possibly have any evidence. There was none to be found in her trailer. It could only mean that he’d been following her and had seen her at the parking lot, then trailed her mother. He knew where Hamilton was living. She caught the glint of a gun barrel pointed in her direction. With each portion of a second feeling like a minute, she contemplated her own death, thought of her son as an orphan, and knew she had to surprise this intruder before he became aware that she carried a gun.

She raised the Smith and Wesson and pulled the trigger.