A year after the untimely death of his wife, Zach is ready to start moving on—he thinks. No, he’s not sure. But maybe Julie can reassure him.

Julianna has just been made the permanent evening anchor at WTMI. She has friends, a life—one that she thinks is full enough. Does she have any room for a widower and his adorable son? Only she knows the answer.

Hope is ready for her longtime boyfriend Sam to put a ring on her finger. After a year’s courtship and relationship, she’s getting impatient. Can she wait? Only she knows the answer.

Sam is ready to put a ring on it, as the song goes. But can he get his act together long enough to avoid tripping over the finish line?

All four will find out the answers to their questions on New Year’s Eve. 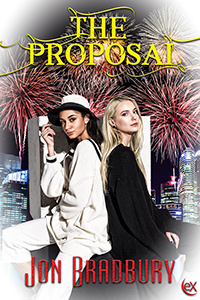 Julianna Lee sat at her favorite spot in her favorite coffee shop, sipping from her smoothie, slowly waking up, even though it was well past eleven in the morning.

She hoped Zach wasn’t late as she checked the time on her cell phone. She didn’t have a lot of time before she had to go to the yoga studio to meet with Hope and Robin.

She had some news for him. And he, according to his text message, wanted to ask her something. Her pussy had twinged when she saw the message.

Just a few days earlier at work, Roger Talbot himself had pulled her aside. “Miss Lee, may I have a quick word with you, please?”

“Of course, Mr. Talbot,” she had said. After all, when the CEO said he needed to talk, what was she going to say—no?

“All right,” Julianna said. “Only if you call me Julie.”

He smiled. “All right, Julie. I just wanted to let you know, in person, that I feel you’ve done such a great job filling in as the evening anchor that we’d like to make it official, and name you the new evening and late-night anchor.”

Julie clapped her hand over her mouth. “Oh my god.”

Roger’s smile widened slightly. “Yes. I’m sure you know by now that Linda O’Neill has decided not to come back from maternity leave.”

“It took us by surprise, I can tell you. But as I said, you’ve done such a great job filling in for Linda that we would like to give you her anchor spot. What do you say?”

“Good. We’ll have Hope announce it on tonight’s prime time broadcast. Congratulations, Julie. You deserve it.”

And with that, he walked away.

Julie was left in a daze as she stood there. Anchor!

Hope came right up to her and flung her arms around her. “Congratulations, Julie.”

“Come on, let’s get over to Wardrobe. We need to get ready.”

They proceeded directly over to Wardrobe. Christmas was coming up later that week. Hardly anyone was around, including the usual prime time anchor people.

As they entered the Wardrobe room, the attendant said, “What are you ladies feeling like this evening? I just got a bunch of new stuff.”

Hope selected a very appropriate dress—white with diagonal red stripes—making her look like a candy cane. But Julie didn’t say that out loud, especially when Hope emerged from the changing stall. She had to admit the dress went perfectly with the black patent-leather boots Hope had brought with her.

Julie, meanwhile, went for a more polished look, choosing a red satin blouse to go with a black leather pencil skirt that had a high waist and stopped right at the knees, finishing it with a pair of patent-leather open-toed heels.

When she did her evening segment on the prime time edition where she had to stand up, she had a feeling nobody would be changing the channel—that, and during the late-night broadcast, when people would be able to see her legs under the anchor desk.

“How do I look?” Hope asked as she closed the stall door.

“Thank you. I still can’t believe you had your boobs done,” Hope said, pointing with her chin to Julie’s obviously larger chest, the curve and swell of her cleavage peeking out from under her blouse.

“Why? You’re the one who said I would benefit from bigger boobs.”

“And my husband did an excellent job,” Robin Meyers said as she entered the room, heading to the attendant’s desk.

“I told you he was the best,” Robin said, then ducked into a changing stall.