America, 1887. In a country healing from the horrors of the Civil War, the American West has never been more treacherous. Evil men do as they please, and the often faulty and corrupt justice system does little to nothing to help their victims.

Enter the Railwalkers. Bandits whose only goal is to punish those whom the law has allowed to walk free. Some think they're an urban legend, meant to scare would-be criminals into submission. Some see them as no different than the murderers they kill, while to others, they are angels of mercy. To Violet Donovan, they are family.

Growing up as the sole heiress to the sizable Donovan estate, Violet's place of privilege allowed her wild spirit to flourish. Despite the pressures of her sex -- find a husband, stay pretty, have children, be subservient, don't speak out of line -- Violet is passionate, loud, stubborn, and untamed. However, at the ripe, marriageable age of twenty, Violet faces the fact that she may have to give in to her mother's wishes and marry mean, ugly Eustace Carpenter, the only other family name in their little town with comparable worth.

But Violet's life changes forever when she is saved from an attacker by a strange woman. A woman who, like Violet, doesn't exactly fit the mold. Unfortunately Violet gets mixed up in a murder charge and has to leave everything she knows for a life on the run from the law. Through divine intervention, she and the woman cross paths again, and Violet comes to know her and her comrades. 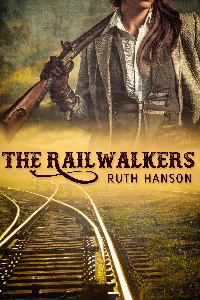 Violet sputtered. She looked back at Linus, who was grinning over the top of his tin cup. She turned back to Mei, who stood waiting. “But I ... I can't --I don't want to --”

Violet gave a few helpless glances over at the camp before launching her fist wildly forward. Mei side-stepped it easily, her hands behind her back. “You gotta aim first,” she said. “Try again. Go for my chest.”

Violet took a breath and punched again. Mei pivoted back, making Violet miss a second time. “Lord, girl, are you trying to hit me or court me? Try again.”

“I wouldn't miss if you kept still!” Violet snapped.

“You think some drunk bastard is gonna stand there and let you beat him down?” She held open a flat palm. “Here. Punch right in here.”

Violet reared back and finally connected her knuckles to Mei's palm. Before Violet could pull away, Mei grabbed her fist and yanked her forward. “Too soft,” she said. “And when you throw a punch, don't put your thumb inside your fist, or it might snap clean in half.” She let Violet's hand go and once again put her own behind her. “Again.”

With her anger getting the better of her senses, Violet bared her teeth and threw a sharp, right hook. Mei tilted her head, avoiding it easily. Violet tried again, and again, and again. Each and every time, Mei dodged and weaved with no effort. Soon enough, Violet was snorting like an enraged bull, while Mei kept cool and collected. “Too slow. You won't land nothin' if you can't read who you're fighting. Predict where they're goin', lead the shot, and then take it.”

“How could I possibly know what you're thinkin'?! This ain't fair!”

What happened next was so fast, if Violet blinked, she wouldn't have seen it coming. One minute, Mei was standing still, her hands behind her back. The next, her fist was flying, and a punch landed square in Violet's jaw. At first, Violet didn't feel the pain, just the shock. She spun about and fell to her knees, hair flying every which way. Her hands were flat on the ground, throbbing in pain after such a harsh landing. Eyes wide, her breath was choppy and sporadic. After a few moments of stunned silence, pain began to blossom up her cheek. Her eyes burned with tears, which she quickly tried to blink away. She'd been spanked before, but never hit, never like this.

Mei walked around and knelt in front of her. Tilting her chin up, she observed what Violet assumed was a fresh bruise. “The second rule,” she said quietly, “is knowing how to take a hit.” Mei's thumb raised and gently pushed away a tear. “If you don't know the pain you're causing, you can't control it. And you shouldn't be causing it.” She turned. “Linus. Bring me some of that fire water, wouldjya?”

Linus approached with the bottle of whisky in one hand and an empty cup in the other. He screwed up his face in disapproval. “Little harsh for a first lesson, ain't it, Mei?”

“If she wants to fight, she'll learn it properly. Which leads us to the third rule.” Mei poured a glass of whiskey and handed it to Violet. “Nothing fixes up a sore jaw like a little who-hit-John.”

Violet stared at the offered drink, and Linus sighed. “Mei, go easier on her. She's not used to --”

“It's fine, Linus.” Sucking up her tears, Violet reached for the whiskey with trembling hands. She took a deep sip, and resisted the immediate urge to spit it back up. She took a steadying breath. “No man's gonna go easy on me. It's best I learn the right way.”

Mei smiled, a glimmer of pride in her eyes. “Exactly,” she said. “But I think we'll stop for now. In the morning, we'll start you off bright and early.”

Break and Enter (MM)
Etienne
In Shelf
$4.99
Tweets by
sirenbookstrand