It’s another standard day in her quiet little neighbourhood, or so Tori thinks. That is until she witnesses her new, smoking hot neighbour Addison having sex in a kitchen across the street. What a view! The woman is absolutely stunning, and staring right back at Tori.

But that isn’t the only bit of heat – there’s a burglary nearby, and the police are called into action. Tensions run high, with fear increasing every day, when the thief strikes again ... this time targeting closer to home. As the rest of the neighbourhood stays in, panicking, Addison and Tori connect, and Tori finds herself introduced to so much more than she imagined. 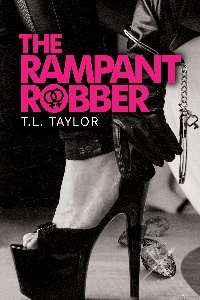 Tori poured herself a sizeable glass of sweet, white wine and slumped into her new, cosy armchair in the kitchen. It was like a giant hug, instant comfort. Her shiny new hair was now thrown up into a messy bun, some of the curls hanging loose around her face. Her make-up had been wiped away, leaving her skin to breathe and naturally glow. Her eyes still sparkled like crushed emeralds. A silk, pastel pink Komodo enveloped her athletic body, feeling smooth against her skin. It covered the tiny white crop top and boxers hiding underneath.

Suddenly the doorbell rang, snapping her out of her relaxation bubble.

Tori opened the door to be faced by her neighbour for the second time that day.

“I thought I’d suggest a peace offering.” She held up a full bottle of alcohol. “It’s rum. You in?”

“I’ll take that as a yes.” She said as she stepped into the house, walking straight passed Tori. “Love your slinky little night-dress thing too, very sexy!”

Tori closed the door, stunned, but thrilled. And followed her guest into the kitchen, slowly, giving herself a couple of extra seconds to formulate a sentence.

“I wasn’t expecting you to knock on my door, you weren’t exactly friendly earlier.”

Tori felt more confident now as she grabbed two short glasses from the cupboard. She filled them both with ice from the freezer, before sliding them across the table to her acquaintance.

Opening the bottle of rum, she introduced herself officially.

“I’m Addison, moved in across the road about a fortnight ago. And you are?”

“Well.” Addison smirked as the drink sloshed. “I feel like I sort of already know you after the other night.”

Addison spoke again. “Oh, don’t be embarrassed, it was fun. I loved that you were watching. Tell me, did you like what you saw?”

Tori reached over and snatched her drink, downing the amber fluid in one go.

“I did.” Her throat burning from the shot. “Pour me another?”

She slid her glass back to Addison, who willingly fulfilled the request. But this time, once poured, she carried the drinks directly over to Tori, being sure to get as close as physically possible on her approach. Nerves kicked back in, and Tori went to take a step back, instead, she froze to the spot. They were face to face. Addison smelt amazing; a fresh, crisp scent oozed off of her, and Tori couldn’t help but inhale deeply, taking it all in. Addison’s stunning, tanzanite blue eyes darted down to Tori’s chest as it expanded more and more with each breath. She noticed a silver nose ring glistening as she studied Addison intently. Her lips remained just as scarlet as when Tori had clocked them hours before, and just as full, just as inviting. Addison must have noticed her fixating on them as at that precise moment she seductively bit her bottom one, luring Tori in with the strength of an enchanting siren call. She leaned into Addison, still staring at her luscious lips until she reached them with her own. She felt Addison kiss her back as she closed her eyes, her stomach fluttered in exhilaration.