After leading a pretty staid and frankly boring life Drusilla Montgomery lands the job of her dreams…working as an assistant to her all time forever favorite romance writer, Gabrielle George. Gabrielle’s assistant, Justin Hunt, is also a slice of Dru’s dreams – tall, dark, handsome and with a nice set of pecs and buns. Night after night they work side by side, answering fan mail, proofreading manuscripts and keeping up the famed author’s social media sites.

For Dru this is more than a job. With the death of her strict and controlling mother – a woman very much like the starchy housekeeper in a dark gothic – Dru finally has a chance to pursue the life of her own dreams. Traveling from the sleepy cities of Marin County, California over the Golden Gate bridge to Gabrielle’s Victorian seems like entering an entire new world. Like the fog lifting over San Francisco bay, Dru’s life takes on new color. Even when her mother reaches out from the grave in the guise of her attorney who threatens to take her home from her, Dru remains undaunted.

As she gets deeper into the job, however, questions are raised about her oh so handsome co-worker – Justin. He is never seen in daylight, he doesn’t eat and there are no mirrors in the elegant Victorian they work in. Is she working with a vampire or just a guy with a quirky personality? And….if he is a vampire, is Dru ready to say bite me? 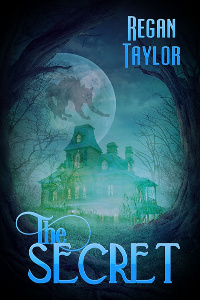 Shoving aside Haley’s negative comments and memories of her mother’s interference, Dru stepped through the Victorian’s doorway, fanciful with the thought that she was crossing into another time. Perhaps even into a century gone by.

“In here.” That luscious male voice called out once again from further down the hall. “I’m on the phone. Give me a minute.”

She followed the sound of his voice, past what a quick glimpse sure looked like a true Victorian living room, to a room so familiar she was certain someone plucked it from her dreams. Floor to ceiling bookcases lined every wall save the one directly across from the doorway. That wall held a brick fireplace large enough for Dru and several close friends to stand in and not even begin to bump their heads. The bronze-colored fender surrounding it held plush blue velvet-covered cushioned seats wide enough for two people to sit side by side at either end. The crackle of a warm and welcoming fire greeted her as she entered the room. Of course, the room felt so familiar since she’d read every one of Gabrielle’s books, especially the ones that took place in Victorian mansions just like this one, over and over. No doubt this room was an inspiration for many of Gabrielle’s drawing room scenes.

The wall spaces not covered with books held framed photographs and paintings. A large silver candelabra sat on a side board, the dozen or so tapers in it were lit, cast a soft glow in the room. On one side of the table was a bowl of fresh fruit and a silver tea or coffee service on the other. A plate of croissants sat near the silver service pots. In lieu of lamps, thick, stocky beeswax candles burned brightly on several end tables. A massive desk sat caddy corner to the fireplace. Incongruous to the rest of the room, on top of the desk sat a flat screen monitor, laser jet printer and several other pieces of modern office equipment. Across the room was a smaller desk that also held a computer, printer and telephone.

Take out the computers and their accouterments and the room existed in another century.

“…that’s right. The end of May…no I’m not joking…look, Madeline, I need the break. Okay? We’ve been turning out six a year for the past five years. And we’re not talking those 250-300 pagers. We’re talking the full-length, 400-500 page books. I need some time for me and I’m going to take it between the end of May and June…no, I don’t know where I’m going to go or even if I am going to leave town. Maybe I’ll just stay home and enjoy my house and all its idiosyncratic issues.”

For a moment Dru felt like an interloper. Who was this man and why was he in Gabrielle George’s office? Or maybe it wasn’t her office but he was the assistant who’d supposedly retired. That was all the agent, Madeline, told her—that the former assistant had retired and Gabrielle George was looking for a new one. Although, looking at this guy with his back to her with his shoulder length dark hair, broad shoulders, pale blue cambric shirt and stone-washed jeans that showed off an amazing ass, he certainly didn’t appear near retirement age.

He was probably ugly as sin.

Then again, given how creepy the neighborhood felt before she entered the house…a slither of chills ran down her spine at where those thoughts were going. A man who was old enough to retire but didn’t look it? Maybe this was a for real, living Dorian Gray. Or a vampire who needed to take a time out and come back under another name?

Or maybe she had read one too many paranormal or gothic romances.

“Look, someone is here. I’m not negotiating this. It’s not like I’m not giving you plenty of notice. End of May, through June, I’m off duty…I will. I’ll talk to you soon…Yes, I promise.”

The man turned to her.

He wasn’t quite ugly as sin.

The more accurate definition would be sin incarnate.

Dark brows over rich chocolaty brown eyes, straight nose and lips that a woman could kiss for hours and never need draw another breath, looked her over. From where she cowered…yes it would seem she was cowering because the man was the epitome of every deliciously scandalously handsome hero in every romance she’d ever read. His shoulders looked a mile wide and his shirt did nothing to hide a set of pecs no cover model could match.

That’s it! She mentally snapped her fingers! He had to be Gabrielle George’s inspiration. He was certainly inspiring her. Had she seen him on the cover of one of Gabrielle’s books?

“And you are?” He finished looking her up and down as he asked the question.

“Well you didn’t answer to hello so I thought I’d skip to the chase and ask, you are?” He assessed her with a quick look up and down her frame.

He’d said hello to her? “Dru-Dru-Drusilla Montgomery. Ms. George’s new assistant.” She muttered, “I hope,” under her breath.

Mr. Sin-saltional frowned at her.

“Maybe I’d misread the ad,” she muttered while beginning to turn away thinking maybe she didn’t understand what the agent told her on the phone. Maybe her assistant hadn’t retired and she’d only been fanciful, seeing what she wanted to see. After all, Martha imagined things all the time. Why not Dru? Could be a family trait. Or maybe it was a joke someone planted on the online job search list along with a bogus phone call with fake interview questions. If my mother were still alive it was exactly the kind of mind game she’d play.

She backed toward the door only to find it closed behind her. Thing was, she didn’t remember closing it. The howling sound of the wind on the otherwise still evening didn’t help too much at that point either. Across the room a candlestick toppled over.