The Seduction of the Sultry Santa (FF)

It isn’t the season to be jolly, not for Chloe. She hates the hustle and bustle of this time of year, and all the festive cheer. In an attempt to make Christmas shopping more bearable, she turns to a few of her favourite things -- a boozy coffee and a sex shop, a winning combination.

What she doesn’t know is she’s about to stumble upon a Christmas treat of her own: a hot, red headed, female Santa.

The sexual tension between them runs wild, but will Chloe be ho-ho-home alone for Christmas? Or does Miss Clause have something special just for her? 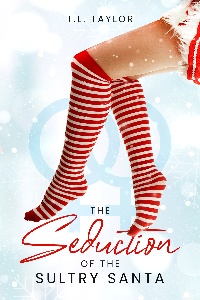 The Seduction of the Sultry Santa (FF)

“Next!” the elf in charge of the queue shouted.

Chloe felt a tug on her arm. “Come on, Aunty Chloe, it’s our turn!”

Tommy skipped past the elf and plonked himself comfortably on Santa’s lap. They had a chat, some toys were mentioned, and lots of giggles were had. Looking suitably pleased, Tommy hopped off and headed towards the next elf at the toy station. Chloe seized her moment to officially meet Miss Claus. She extended her arm to initiate a hand shake.

“Thank you for that, you’ve made my nephew’s day.” She smiled as she spoke, being sure to make eye contact.

Santa complied and took Chloe’s hand. They politely shook hands, as if they both knew it was simply a technicality to progress to the next step.

Their gaze held strong; it was intense. Chloe took it upon herself to move things along. She leant in tightly.

“I wouldn't mind sitting on your lap some time.”

The sexy Santa tilted her head in response, pointing her mouth towards Chloe’s ear. “Or on my face.”

Keeping Chloe close, she tightened their handshake. “I finish work in an hour. Meet me at the Alpine bar around the corner.”

Chloe let out a deep exhale, not realising she'd been holding her breath. She edged back so they were still touching but so that Miss Claus could see her nod her head in agreement of the proposal.

The sound of Tommy’s voice snapped Chloe back to reality. “Aunty Chloe, look what toy I got! What were you and Santa talking about?”

Chloe had to think on her feet. “Santa was just telling me what a good boy you’ve been.”

Tommy beamed. “And did Santa say you've been good as well?”

“I must have been.” Chloe smirked. “Because I’ve been offered a present of my own.”