The Shoals of Crystal Bay (MF)

Crystal Bay has always been an alluring place of wonder: golden brown beaches stretch out as far as the eyes can see, the warm emerald blue waters of Crystal Lake tickle the senses and tantalize one’s mind with a fanciful sparkling palette of deep wonderful hues, and at night, when both moons are out and full, romance sometimes creeps in from the quantum depths of the cosmos, and it’s been known to take control over the strongest of souls. Sailors have made their fortunes there, others searching for prosperity and a fresh start have often paid the ultimate price and given their lives to the deep cold depths of the mighty inland sea. But while some dreams are granted, and others are lost to the mysterious flowing rivers of time, the alluring wonder of the lake and bay has forever remained the same.

Fed up with his fruitless marriage; Ken Mathews has decided to leave his wife and start anew at one of the bay’s oldest lighthouses: a place his grandfather grew up at, lived out his years, and eventually gave to him when he retired. Throughout Ken’s life, he often visited the bay and lighthouse. Though he loved it there and had plenty a fond memory of the time spent, the thought of ever actually living by the lake had never crossed his mind.

The universe is a peculiar place: it’s continually breaking down, rebuilding, expanding, and giving birth to new frontiers that stretch far across the deepest reaches of thought and comprehension. Nothing ever just simply ends. Rather, all things in which you see, hear, touch, taste, feel, and smell, eventually transform into something else. Within the forever evolving cosmos, love is the only variable that remains constant. In its truest form, love transcends the physical, the metaphysical, and it can travel vast distances in short periods of time. Far beyond the limits of any technological achievement—love can bridge gaps in life, death, and space-time. Too many times, the spaces between us appear to set boundaries and uncrossable thresholds to which our morality and mortality bounds us by. Often, we encounter tough obstacles that require major decisions. Decisions that affect all things around us.

Ken chooses to leave love behind. At all costs, he decides to carry on without it. Unknown to him, love has never left, and it makes an unprecedented appearance. 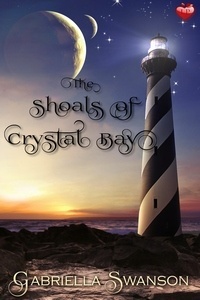 The Shoals of Crystal Bay (MF)

Long golden blonde was her wavy hair, emerald green were her deep round eyes, soft olive was her skin; like an angel sent from far beyond she stood standing in the kitchen before him.

“Every piece of my being tells me this is wrong, and it’s only going to end in disaster.”

“Please tell me you love me.”

In an instant that felt like a lifetime, Ken saw Sophia’s heart sink and break. She cried hard, took a long look at him through her tears, and ran off for the door. At the door, she opened it without looking back and ran away as fast as she could.