Bartholomew Jay Westwood, or simply Jay, is a suit fanatic. They're easily his one indulgence. He owns one in every color, which makes it nearly impossible to pick one for an upcoming holiday party. The only one that seems suitable is white, and he originally bought it for a Halloween costume three years ago. But he can't quite bring himself to wear it and settles for another number from his vast collection.

Unfortunately, tragedy strikes after he stops to pick up a last-minute gift. But the incident takes place outside his favorite suit shop, The Well-Dressed Man, and waiting inside is none other than expert tailor Walden Conway. He might have just the thing Jay needs, and it may be more than a suit. 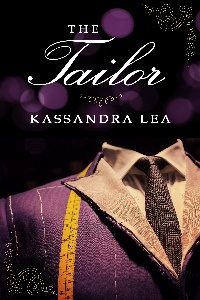 Satisfied, Jay finally left the house, stepping out into the bitter cold of early December. Shrugging into his winter coat -- charcoal gray, knee length -- he made a beeline for the driveway. Little white flakes began to float lazily down to join others from previous snowfalls, a blanket of white five or six inches thick already coating the ground. Jay sidestepped a patch of pesky ice near the end of the walkway and hit the fob on his key, the lights of his sedan flashing, the engine turning over with the help of an automatic starter. If he hurried, there would still be time to stop by the liquor store and pick up a decent bottle of wine or some lovely champagne. His mother had taught him to never arrive at a party empty handed.

Even if said party was being thrown by his boss.

Another valid reason not to show up late.

Heater blasting, radio pumping out Christmas carols, Jay started for town with one destination in mind. He attempted to ease his growing nerves as well as shush his second-guessing inner voice by singing along to the radio, belting out the carols as best he could. It helped him get in the mood, seeing as it had been December for all of three days and he was on his way to the first of too many holiday parties. Stopped by a red light, he looked around. The flakes were falling heavier, and lights reflected off the wet roads.

Jay spotted the party invitation out of the corner of his eye. It sat on the passenger seat. The off-white envelope bore his name across the front in gold lettering, the same lettering that inside gave him all the essential details and proclaimed that he was allowed to bring a 'plus one.' Jay felt a dull ache somewhere around his heart and a little of his cheer departed. Only four months ago, he'd born witness to the ending of his longest-running relationship. Eight months they'd been together, and he had been starting to plan the holidays when the door he'd never seen coming slammed in his face. Just like that, in the blink of an eye, he was single again, his heart shattered.

Even now the bitter taste of love lingered on his tongue. The light turned green. Jay banished thoughts of his ex as he pulled into the little strip mail that housed his favorite liquor store. He eased the sedan into a spot closest to the liquor joint, doing his very best to ignore the glow of the window display at The Well Dressed Man. Now was definitely not the time to be out looking for new duds. A little bell over the liquor store's door chimed. A middle-aged man looked up from the magazine he'd been reading while manning the counter.

Jay knew exactly what he wanted; he passed selections of vodka and whiskey and mixers until he reached the wine aisle. From the array of colored bottles, he plucked a wine produced in-state, one made with frozen grapes and known as ice wine.

It seemed most fitting.

So he got a second bottle.

And then a third because it wouldn't hurt to bring one home. Perhaps he'd drink a glass in front of the fireplace while perusing the pages of a well-written novel. A perfect winter's evening.

For a single man.

He contemplated returning one of the bottles to avoid looking like an alcoholic and decided he really didn't care. Jay paid for his purchases. Halfway to his car, a gust of wind stung his eyes and sent icy flakes down the collar of his jacket. Something fluttered along the edge of his vision and he turned to look, a bit afraid whatever it was might hit him. Turning turned out to be his big mistake of the night: he made one misstep in his dress shoe, the smooth sole coming into contact with ice.

His foot slipped out from under him.