Sixteen-year-old Tara Bennet awakens to the voice of her cat, Boris. But Boris isn’t meowing. He’s saying actual words! In English! And he’s being snarky.

Suddenly, magically, every animal on the planet has acquired the power of speech. Pets are chatty with their owners and birds gossip in the trees. In zoos, animals beg to be released, and those on factory farms destined for slaughter cry out for mercy. Civilization is thrown off-kilter, and factions rise up to confront the chaos.

Against this tumultuous backdrop, Tara Bennet and her friends try to live their lives as normally as possible. But in a remarkable twist of fate, Tara is pulled into the center of the cyclone. Her aunt, Chloe, a professor of herpetology at Dartmouth, has a pet chameleon named Pixel that claims to be in telepathic communication with a mysterious entity behind the phenomenon.

There is powerful opposition to the talking animals, and when it becomes clear that Pixel’s life is in danger, Tara and the others seek help from US President Atticus Hayden. But soon it appears there will be a war between humans and animals, with terrible destruction and loss of life.

The Talking presents challenging ideas in the mode of a page-turning thriller, with characters—some of them four-legged, feathered, or scaly—who are wise, witty, flawed, and truly memorable. 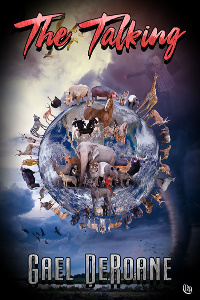 I’m standing in front of the TV, holding a mug of coffee, too worked up to sit. Boris, apparently more at ease with the situation, is in the overstuffed chair I usually occupy.

“I never understood why you spent so much time in front of this contraption,” he says. “But now that I have language, I get it.”

I look down at my cat. The two of us have been watching TV for hours. All the channels are carrying the breaking news story. Every animal on the planet, it seems, has suddenly started talking. The astonished newscasters offer testimony that I have not lost my mind, which I thought a possibility during the first few minutes of my conversation with Boris. “You don’t look real excited about this,” I say. “Just sitting there watching the tube like it’s no big deal.”

Without taking the focus of his yellow-green eyes off the screen, Boris replies, “You’re quite mistaken. I’m very excited. But it’s not in my nature to show it. Have you learned nothing after five years of life with a cat?”

Before I can answer, my cell phone rings, startling me. I’d been calling Mom and most of my friends, but service was down, probably because the world was going haywire. I fish the phone from the pocket of my shorts and look at the screen. Joyce Bennet—it’s Mom.

“Tara, can you believe this?”

Boris looks away from the TV. “Who is it?”

I’m dumbstruck. My cat is asking me who’s on the phone. Life is going to be one big surprise after another. “Boris, don’t take this the wrong way, but why would you care who it is?”

Sarcasm. Of course, that would be a feline personality trait. “It’s my mom.”

I can hear my mother’s tiny squawking voice. “Oh my God, is that Boris? Are you talking with Boris?”

“He wants to talk to you.” I hand the phone to my cat but realize he has nothing to hold it with. We exchange blank stares.

“Right. Hey, wait a minute. How do you even know about the speaker?”

Like all cats, Boris has an expressive face. It’s mostly the ears. Pulled slightly back, they indicate annoyance, and standing straight up indicates alertness, while flattened out means rage or terror. The eyes also reveal much about what a cat is thinking and feeling—round and staring if a mouse is about to be done in. Half-closed and dreamy while resting on a human’s pillowy lap after a good meal. But now Boris shows a new expression. I’m not sure how he’s managing it, but my cat seems to be looking inward as if searching his memory. “That’s a good question,” he says. “I guess I just picked up on it from being around you so much.”

I press the speaker button and put the phone on the arm of the chair.

“Hello there, Joyce,” Boris says. “Are you having a pleasant weekend?”

“Yes, well, I’m not sure that your God has anything to do with this, but I understand that humans tend to go there when things stop making sense. In any case, let’s get down to business. I’d like to discuss the food situation with you…”

Mom is saying something in response, but my attention is suddenly drawn to the TV. There’s a local news flash. A man went on a shooting spree when his neighbor’s dogs began taunting him. Thinking he must be going insane to hear language—some of it profane—coming from the mouths of dogs, he shot not only the dogs but their owner as well, since nothing mattered anymore. Apparently, he and his neighbor had previous issues concerning the dogs. My jaw drops as the dazed handcuffed perp is pushed into the back seat of a police car. I know the man!