A choice to be made, and a price to be paid. Sometimes, doing the right thing means paying the ultimate price.

Linden Lampkin, fifteen, ignored by an uncaring father, bullied and harassed by his peers, almost meets his end one night in an alleyway. The victim of a random mugging, he enters a portal into a parallel universe, a universe very much like ours.

Linden ends up at the Tower, a hangout where a group of very unusual people—the Ultras—live and work. With advanced technology and medicine, they heal his injuries.

The procedure ages him to that of someone almost twenty years old, and he begins a new life working with his mentors, a group of enhanced individuals who help out those on Earth whenever help is needed.

Fitting in is difficult at first, but through hard work, Linden copes, succeeds, finds a girlfriend, and thinks he’s found happiness.

However, a chance meeting with someone on Earth leads him to think that the Ultras aren’t really who they say they are.

His search also pits him against a super-villain who has no qualms about killing, and when Linden finally learns the truth about who he’s been living with, he also has to make the choice between saving his life and doing the right thing. 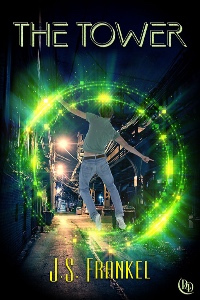 An alley in downtown Portland. Midnight or thereabouts. Summer.

What in the hell am I doing here, and why?

I coughed, felt the pain of my broken ribs cascade through me, and then reached up to my mouth to wipe the trickle of my life’s essence away.

Useless…it was useless to do so. The damage was too great. Forget about the why. I knew why. I also knew how it had happened, and I cursed myself for getting into this situation in the first place.

A few people passed by the alley—couples on a date, night shift workers on their way home, and the usual assortment of drunks and druggies. None of them bothered looking inside.

Even if they had, my voice didn’t work. Pretty soon, I’d choke to death on my own blood. Some way to go out…

Three hours earlier. My house, a residential area in Portland.

That came from my father. He sat in his armchair in front of the television set, watching a baseball game. A bottle of Scotch, his favorite beverage, lay within arm’s reach on a small table.

At the age of fifteen, I thought I had the right to come and go as I pleased. It was summer vacation, I didn’t have to go to summer school, unlike some of the other dunces in my class, and I knew my curfew—eleven o’clock. “It’s a nice night.”

He grunted out a phatic response. Right, like he really cared? His girlfriend sat next to him, an amber-colored bottle. I used to wonder why he’d turned to the booze, but really, it wasn’t necessary. It was all due to my mother passing away three years back.

She’d died from leukemia. I’d watched as she’d taken her final, rattling breath, cried, went to the funeral parlor with my father the next day, saw her casket get lowered into the earth, and that was that.

My father, never a warm person to begin with, gestured at his car that sat in the parking lot. “Let’s go home, Linden.”

Once there, he took off his jacket and tie, tossed them on the couch, and went to the bar we had in our living room. I’d seen him take a drink on occasion well before my mother had passed on. No big deal—many adults imbibed.

But after my mother died, he got more and more into it, and one day he yelled up to me while I was in my room, “Linden, go get me a bottle!”

From that point on, alcohol became his best friend. It didn’t lead to abuse, not exactly. My father never hit me. He did something worse—he ignored my existence, and that hurt worse than any name he could have called me or any punch he could have landed.

As for names, that was mine—Linden Marshall Lampkin. But no one at school ever called me that.

No, at school from the first grade onward, I got called Linie or Loser or Lumpy. Every rotten moniker imaginable in the world was tossed at me. “Hi, Lumpy, what’s up?”

And so it went. Everything you’d consider wrong with being a kid was wrong with me. I was small for my age and skinny, with a mess of brown hair, green eyes, and I showed zero skill at any sport. Every kid had something special about them. They were strong, or had interesting eyes, or they had big noses—something different.

On me, though, nothing stood out, which is why I got ignored or pounded on—never any in-between. Summing it all up, if someone had stuck a label on me, it would have been Classic Loser.

Sadly, I believed it. After reaching the third grade, I spent the next few years at Portland’s T.C. Luma Elementary-Junior High School either being pushed around by the local bullies or jocks, or both—usually both. Being slammed into lockers became a ritual with everyone. “Today it’s your turn, Joey.”

Joey Stiles, big, mean, and sort of stupid, which amounted to a very bad combination, grinned as he reached out to grab me. “Loser wants to get slammed, don’t you, Loser?”

Yeah, me again. Joey was usually accompanied by his fellow minions, Greg Mathers and Tim Connery, both much taller than me, heavier, and without that special something called a conscience.

If Joey didn’t smack me around, then his buds did, and there was nothing I could do about it, either. I always wondered if the teachers themselves went through the same kind of hazing when they were young.

The one thing I had in my favor was that I could run fast. It came in handy when outrunning the bullies. As soon as three-thirty rolled around and the final bell rang, it was feet, do your stuff, and I tore down from wherever I was at the time to my locker on the first floor, got my stuff, and then ran out the door. Usually, I outran the punks.

Usually, and on the occasions that I couldn’t, I’d walk home from school with a shiner or bruises all over me. When my father viewed the damage, he merely shook his head, ashamed of the son who couldn’t fight and who was a social outcast.

To be fair, I was a bit of an outcast, certainly not in the elite class, for those people had it all. They were bigger, stronger, faster, smarter, nicer-looking, and just all-around better at everything than everyone else.

One rung down the ladder lay the tweeners. They straddled the twilight zone at school. They couldn’t really break into the elite category, but at the same time, they were desperate not to be stuck in the nether regions of social or academic life, and they often did anything to avoid being labeled as the butt-ends of school society.