The Tribulations of Tobias (MF)

In the depths of the sleepy countryside in the South West of England in the summer of 1775, a young curate, the Reverend Tobias Whitmore, finds himself unwittingly seduced by the comely ladies of Lesser Witteringly.

Such a delicious experience seems to haunt him as he moves to Stratton-over-Wye to become vicar of St. Margaret’s. This canny career move, engineered by his redoubtable mother, only encourages her attempts to find him a wealthy and socially ambitious bride of her choice.

However, Tobias, while coming to terms with his ministry as best he can, finds to his surprise and delight that a number of less than respectable ladies seem to take a shine to him.

Will Tobias resist his mother’s iron will to marry him off to a terrifying highest bidder? Will the naughty ladies in his life continue to deliver sensory recompense? And will he, amongst all the clerical and family pressures and lubricious temptations, manage to find true love? 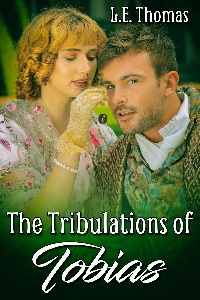 The Tribulations of Tobias (MF)

Mrs. Whitmore had given him a bare six months to settle himself in his new duties and since then, she'd been using hitherto unsuspected local connections to magically dredge up suitable candidates for the position of his bride. Tobias thought glumly, that if it was not for her devout Christian beliefs it might be guessed his mama dabbled in witchcraft.

He had hoped that his comparative poverty and personal diffidence would excuse him from too much attention but he reckoned without the ancient Whitmore name, and its attraction to those with relative wealth but no great forebears. There was also the vital factor of his mama’s iron will.

Within weeks, word had got around and families who didn’t regularly attend St. Margaret's suddenly appeared with their grown-up daughters in tow. Tobias again thought fondly back to the previous year and the presence at Sunday services of the delicious Jane and Sally who teasingly showed off their bounties in church with a naughty smirk.

With another heavy out-breath, he reckoned the appearance of eagerly hopeful mothers and primped up, overdressed young ladies did not hold the same degree of happy anticipation.

Apparently, the choices had been narrowed down to the daughters of a Mr. Lowe, a local banker. Patience, Hope and Chastity were reputedly accomplished and good Christian girls who were dwindling into spinsterhood. Privately, Tobias wasn’t surprised about that.

They were amiable enough young women, he supposed gloomily. Though he did not doubt that the beneath each simpering exterior was an implacable determination to rule the domestic roost.

The three were somewhat interchangeable, with no chins and not much bosom to speak of between them either. Tobias again thought wistfully of the vast array of bare breasts available to his touch in Lesser Witteringly. But such wishful thinking did not help his dilemma.

A few days later, he found himself in the Lowe’s well-appointed drawing room, a fake smile pasted on his face and a delicate china teacup balanced precariously in his hand. He had done his best to convey he was present only for a casual social and pastoral visit, which had been totally ignored. So, he was being politely grilled by Mrs. Lowe about his prospects while his three prospective brides hovered about, dressed in frilled muslin and pretending not to listen with eager interest.

“And might you take on another parish in the near future?” Mrs. Lowe asked, calculatingly reckoning his potential earning power and clerical ambition in one fell swoop.

He took a sip of scalding tea in lieu of a reply, wondering how he far he could indicate a lack of aspiration without it getting back to his mother.

“Of course,” Mrs. Lowe continued without missing a beat, “a young man like you could only benefit from a helpmeet to aid you with your responsibilities.”

His eyes streamed as he held on to the cup, wobbling dangerously on his knee. He wondered desperately if the breakage of valuable porcelain or the ruination of an expensive carpet might help him escape his fate. To his horror, all three of his assistant hostesses started to cross the room and come to his aid in a fit of girlish exclamations and flounces. The tableau froze at a welcome interruption.

“Excuse me, madam,” the maid said politely, stepping just inside the room and ignoring the bevy of fussing young ladies. “But an urgent note has come from the vicarage for Mr. Whitmore.”

Thank you, God, Tobias uttered to himself, casting his eyes gratefully to heaven, or rather, the finely decorated plaster ceiling, as the missive was passed over. A parishioner in chronic poor health was requesting his immediate presence. Feeling slightly guilty about being glad of Mr. Smith’s incapacitation, Tobias rose to make his excuses. The maid neatly relieved him of the troublesome teacup.

“Oh, but you can’t go yet,” Mrs. Lowe exclaimed, in a definite reprimand rather than mannerly regret.

“Or admired my stitching,” Chastity pouted.

Tobias edged out of the room, trying not to make any assurances about returning for such dubious treats. Once safely in the hallway, the maid helped him on with his coat and gave him a conspiratorial wink as the volume of the high-pitched voices in the drawing room rose plaintively.

He ought to have known he wouldn’t get away so easily.