With the name of Jesse Thomas Cromwell, he definitely belongs in the world of Renaissance Faires. Playing old instruments of yore and singing ballads and bawdy tunes puts him on stage. This is Jesse’s favorite pastime, and things are going well until bagpiper James opens up a competition on a neighboring stage. Jesse becomes louder and bawdier until security comes and kicks him out.

Later James finds Jesse and apologizes for the ruckus. Together with a young lad whose faire gear was stolen and James’s niece, or maybe now nephew, they hatch a plan to get back into the Ren Faire. There are signs James isn’t altogether straight, but can Jesse answer that question in a satisfying way? Especially when they just might get thrown out of the faire again? 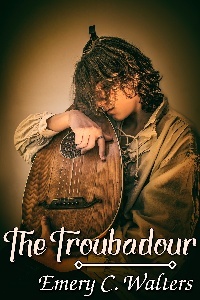 But right now, I’m on stage and my show is starting. I scanned my audience for children and at the moment all was clear, so I started in with one of my all-time favorites, “A Whore in Every Porthole,” as it was known several hundred years ago on British sailing ships. I strummed and the audience watched me. I knew I looked good in my period costume, lots of red and lace and very tight tights; the ladies were enthralled (whoopee). I had just gotten to the part about what went into the whore in the porthole when a horrible cringing noise started on the other stage. There he was, Mr. Ego in a Kilt, warming up. All the children nearby ran over to his stage. Half the women in my audience went too, and the rest covered their ears and cringed, looking over their shoulders. I actually hit a bad note and tried to cover it up.

The start of a bagpipe song is called an attack with good reason. And now was not the time. I figured I’d show him, so I cleared my throat and raised my voice. Now, my voice is a thing to be dealt with; it has a life of its own. I’d hate to brag and say it’s a clear tenor or a great basso profundo because I can cover several octaves and go falsetto when I want to, and, sometimes, when I don’t want to. Anyhow, I was just belting out, “It was on the good ship Venus, you really should've seen us. The figurehead was a whore in bed. And the mast, was a mammoth ...” when I was rudely interrupted by the noise from him, that plaid-skirted attention-whore, or was it a pig and a baboon trying to mate with King Kong? He started into a rowdy rendition of something vaguely familiar. I thought bitchily, You can’t dance to it but I’ll give it a seventy because I’m afraid of it.

I’d never had to use my speakers before, but that didn’t mean I couldn’t; so I did. People have been at war with Scotsmen for generations, so why not now? But ... even so, over my wonderful voice, I could still hear the screeching. It reminded me of what they played at the beginning of -- fuck, baseball games. It was our national anthem, and people were standing and turning to watch him, placing their hands over their hearts, and walking away from me.

I turned up the volume. My speakers screeched. My music caught a bad note. My voice, still on tune, go me, sprang out like a cat seeing a cucumber, “When I was a little boy my mother always told me ... That if I did not kiss the girls, my lips would grow all moldy ...”

No, nobody turned back to me. All right then, let’s try this one. My mother did not teach me this one.

I shouted, strutting around, “Three little ships set out to sea, each one a double-decker. The queen she waved the royal flag, Columbo waved his pecker. Columbo paced upon the deck, he knew it was his duty. He took his whang into his hand and said, ‘Ain’t that a beauty!’ He knew the world was round-o. That sailors could be browned-o ...”

Right then the horrible caterwauling across the grass stopped, and everyone turned to look at me as I smugly finished my song, “That dirty lecher, asshole stretcher son-of-a-bitch, Columbo.”

This was followed by dead silence until one old lady said quietly, fanning herself, ‘Oh dear.”

And over the speakers came the call, “Security to lane six.”