The Truth of Sweet Things (FF)

Becca -- a Halloween-hating, awkward twenty-four-year-old -- is once again dreading the approach of fall when she's told that her best friend’s sister, Amy, is back in town. Amy is charismatic, smart, and successful, and Becca has been nursing feelings for her since high school, when they were on opposite ends of the social spectrum. Now that Amy’s come out as a lesbian, though, she’s theoretically within shot -- if only Becca can muster up the courage.

Unbeknownst to Becca, her best friend has already let Amy know she’s single. When Amy texts her, hoping to reconnect, Becca jumps at the chance to go to the local cafe with her. It’s not a date, she tells herself, but part of her suspects it is.

What follows is hours of reminiscing as they each bring up things the other has forgotten, or never knew in the first place. Will Becca be able to overcome her insecurity and follow up on her suspicions? Or will she let the opportunity slip through her fingers again? 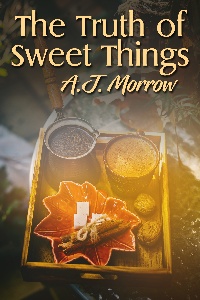 The Truth of Sweet Things (FF)

Three days later, Becca had completely forgotten about her conversation with Dani. She was sat at work, her eyes strained as she stared at yet another boring but apparently vital email, when her phone buzzed. It was her personal phone, not the brick she’d been assigned by her boss, but she didn’t think about that as she went instinctively to answer it.

There, under an unknown number, was a simple, Hey.

Becca stared at it. Three pulsing dots appeared underneath as whoever it was began to type again.

Becca’s eyes grew wide. Her heart, instead of speeding up, screeched to a halt, as though it had dropped round out of her chest.

Hi, she typed back, unable to think of anything else to say.

She waited a minute, mind racing. Why would Amy, of all people, be texting her? They’d never really talked, even back in high school, when Becca had practically lived at her and Dani’s house. Amy had been nearly three years older, a senior when she was a sophomore, and too wrapped up in the drama of finals and cheerleading practise to notice the acne-covered sixteen-year-old so obviously fawning over her.

There had been a few parties, she remembered, when her and Dani were juniors and had gotten way drunker than they’d meant to, and Amy had driven by at one in the morning just to pick them up. She was a good big sister to Dani, truth be told, and had never told their parents what really happened. There’d been a few conversations then, intimate in the way that tipsy late night conversations often are, but Becca could barely remember those. There were flashes of sentences -- of kind, sad eyes and a soft hand on her shoulder, of Amy telling her she was brave -- but there was little in the way of context, and Becca couldn’t quite figure out what she had meant.

Do you remember that one time you threw up on Justin’s shoes?

Becca snorted. That was what she started the conversation with? It seemed strange to her, but maybe Amy was trying to reminisce. Dani had mentioned something about her being homesick ...

Yes, she wrote back, unfortunately. He won’t let me live it down.

Didn’t he call you Puke-face or something for years afterwards?

Becca laughed. Yeah. Before that it was Snot-face though, so honestly Puke-face was an improvement.

Justin, only a year older and always the king of partying, had teased her relentlessly about the first time she’d been properly drunk. It’d only happened a few times -- Becca had always been pretty responsible, even as a reckless high schooler and college student -- but he brought it up at least once every time they saw each other. She didn’t mind, of course -- Justin was still one of her favourite people, and she had plenty of embarrassing stories to tell about him, anyway.

Becca glanced out the window while she waited for Amy’s reply. A blanket of heavy gray clouds were hovering above the tall building she worked in, creating a gloomy and oppressive atmosphere. They hung too low in the sky, swollen with rain, and even just looking at them made Becca feel cold. The trees across the street shivered in the wind, their branches bare and black against the steel coloured clouds. For a time of year when the weather was meant to be in transition -- not quite autumn or summer -- it certainly looked like fall.

Across the open plan office, Becca could hear plenty of noise. From her colleagues typing and the whir of the coffee machine at the other end of the room to the click-clack of her boss’s heels against the linoleum floors. Becca shifted her gaze back to her computer as he passed, pretending to be engrossed by the email.

Once her boss had passed, Becca rubbed her eyes and took out her phone again. There, once more, was a text from Amy -- two, actually. The first was some joke about Justin, funny enough to make her snort a bit when she read it, but it was the second that really piqued Becca’s interest.

I know it’s been a while, but would you like to grab coffee sometime?