When Leo Wayland accepts a job as head of the new horror unit at Maiden Studios, he knows what is expected. Make cheap movies that earn their money back fast. It doesn't matter that he dislikes horror. He just needs to escape his assistant director's position at a rival studio.

But he didn't expect to be assigned a terrible title and a leading man, all before he even had a script, or that his leading man would be Everett Reid, the actor who rejected a very young Leo’s advances, only to disappear from movies altogether a few years later in a cloud of scandal.

Everett Reid will do anything for a chance to get back the career he lost and away from teaching at a theater camp for children. And if it means working with Leo Wayland again, he can do that too. Especially now that Leo is all grown up and not so untouchable.

With only three weeks, a flamboyant stage actor, twelve scantily clad women, and a sound stage full of coffins may not seem like the makings of something great. But really, that all depends on what you are hoping for. 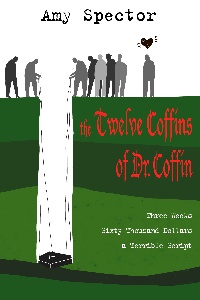 “Where did you find this guy?” Leo studied Lee Hellstrom as he sat at one of the office desks and read through the script, turning each page with an exaggerated flourish.

The man had shown up at the office door wearing a cape, a beauty mark drawn high on his cheekbone, and carrying a silver-handled walking stick he obviously didn’t need. The bio on the sheet of paper he'd handed over claimed he was a mature fifty, but Leo was sure it was a lie.

“I worked with him on one of my first pictures, and saw him again on stage with Helen Hayes in New York a few years back. I promise you, he’d good. Great.”

"Well." Lee finally looked up from the pages and smiled. "Isn't that the most delightful piece of trash?"

He spoke the words with an accent that Leo both couldn't place and was almost certain was fake.

“You’ll do it then?” Everett hopped up from where he sat with Leo on the far side of the room and moved to perch on the edge of the desk. "Be our Dr. Coffin?"

“My dear boy.” Yep, a mature fifty was complete bullshit. “I am your Dr. Coffin.”

Everett grinned over, and Leo took a deep breath, resigning himself to trust Everett that Hellstrom was good. Now that he’d met the man, Leo couldn’t quite imagine his doctor played by anyone else.

“I remember a similar story in the news back in the thirties, I believe.” Lee closed the cover of the script. “A radiologist in the Keys stole the body of one of his tragically fated Tuberculosis patients. Living and ... how to put this delicately? Loving? Until he was found out by the poor deceased girl’s family?”

“Yes, Carl Tanzler.” Leo hopped up, excited. “It was discovered when the girl’s sister saw him dancing through the curtains of his house with what looked like a life-sized doll.

I read about the story years ago. It's always stuck with me. Though, with our tight filming schedule, we'll have to eliminate, or at least rethink the cemetery and mausoleum scenes."

“I assume you, Everett will be playing Winslow?" Everett nodded, and Lee look at Leo again. "And who is our lovely Jacqueline?"

“I haven’t cast her yet. Or your harem of coffin beauties.”

"So far, it's just you and Everett. We'll be holding auditions on Friday. I'd love it if you could be there." Then maybe Leo could have some of the more promising prospects read lines together with the two of them. It could save time. "If that's possible."

“I’d normally say that’s too many cooks in the kitchen.” Lee stood up, brushing at imaginary dust on his shoulders. “But I would like to have some input.”

“Of course.” Leo would probably regret the question, but he asked it anyway. “What’s on your mind in particular?”

"Well, I think it's important that Jacqueline is not too young. Everett is a fetching man, but I don't feel the audience could entertain even the most passing of empathy for my character if the younger sister our doctor is infatuated with were to be too young. And I think the audience's ability to empathize will only increase the horror of it."

Leo nodded. It was something he hadn’t considered.

“And beautiful, of course, Jacqueline must be beautiful. But maybe beautiful in the same way that Bette Davis has always been beautiful. Like it takes a lot of work.”