Felicity Garland wants to be left alone. She has her video games, her own apartment in a new city away from her controlling mother, and a PhD to complete sometime in the future. When she is invited to a Renaissance Faire with another student, she finds herself getting a tarot card reading -- but only as a joke. But the cards seem to reveal a secret dream landscape in which she suddenly finds herself trapped at night, and now Felicity isn't sure what to do next.

Enter Dakota, a fellow PhD student slash bartender and trivia maven, who seems to know just about everything there is to know about tarot, myth, and the unruly reality of our inner dream lives. With Dakota's help, Felicity starts to crack the riddles at the heart of her unconscious dream landscape known as The Twilight Kingdom. As she gets closer and closer to the dark castle at its center, Felicity also begins to unravel the secrets she's kept from her youth spent institutionalized and her crumbling family life. When dreams turn to nightmares, and the darker prophecy of the tarot cards starts to become a reality, Dakota disappears and Felicity is left picking up the very-real pieces of her waking life all by herself.

Will Felicity be able to confront the shadows of her past in order to find a better future, one in which she and Dakota can remain partners in more than just a passing dream world? Or will she slink back to her virtual reality video game and refuse the call to adventure over and over again? 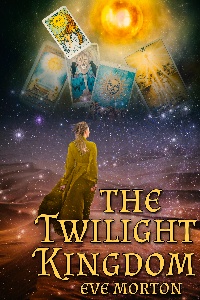 The moment she reached the wooden walls, she was confronted with a sign that said Welcome to the Timeless Café. There was no doorknob, but the shape of a door. She wandered around the outside of the café and confirmed that it was three dimensional. This was real, but she realized she was going to have to throw her shoulder to get the entrance open; she was going to have to try a new kind of floating.

She threw herself into the door. It popped open. She fell out onto wooden tavern floor with a clatter as her silver weighted spheres hit the surface. She worried she'd lose them, but they stayed in her pockets.

A cacophony of noise filled her ears. Though the tavern seemed empty, a woman with stark white hair and a shifty gait appeared from behind the counter. Her voice was craggy, yet crackling, as if it was a recorded voice from another time.

"What do you think you're doing? You don't barge in here."

"I thought it was open. I'm sorry. There was no ..." Felicity righted herself and gestured to the door. A gold knob was now there where it hadn't been before. She turned to the woman, who was still yelling about rudeness and manners. "I'm sorry. I didn't think I could get inside any other way."

"Well, you're here, so sit." She put a drink on the table. The cup was opaque white plastic. It smelled like strawberries. Yet when Felicity sat down and took a sip, it was just water. "Thank you. I needed this."

"It's what I'm here for. I suppose you're preparing."

The woman laughed. Her face seemed to contort and remain frozen in the grimace, as if it was a glitch in a game. Felicity sat closer on the barstool, wanting to see the woman as clearly as she could. "What's your name?" Felicity asked. She remembered an old trick from the video game Treasure Hunt, one that linked all the way back to Homer's Odyssey. When people introduced themselves in the game, they became real -- meaning they could give gifts as well as take damage from an opponent. If they tried to say their name was no one, it was a sure-fire way to realize they were tricksters.

"No, please. Tell me your name. I'm Felicity. And I'd like to go to the castle."

“Is that the castle?”

“No, it’s my name.” She tut-tutted under her breath. “After such rudeness, I thought we were going to be on first-name terms.”

“I’m sorry. We are. Nice to meet you, Cressida. Do you know the name of the castle?”

“I didn't expect to see anyone this late in the day, castle mission or not."

Felicity grew frustrated with the conversation. When she looked out the window, she was sure the sun was at its zenith. It couldn't have been that late, yet Felicity felt a sense of foreboding, as if she was running out of time. It had already taken so long to climb these two hills. She needed provisions in order to keep going. Now that she'd awaken a beast of hunger within her, it seemed to be all she wanted.

"Is there any way I can pay you for materials?" Felicity asked. "I think it'll take me a while to get to the castle."

"It will. Especially with your feet the way they are."

Felicity looked down at her feet. She wore black boots. She was all in black, now marked with gold sand what wouldn’t come off no matter how much she shook her clothing. She felt like the cosmos itself, like the dark sky speckled with an entire zodiac worth of stars. "What's wrong with my feet?"

"I've already sunk twice. I got up, though."

"Which is why I'm asking for provisions, Cressida. Can you help me?" Felicity's tone shifted. She was angry now. The more angry she seemed to be, though, the bigger Cressida’s smile became.

"I really didn't expect to see anyone this late in the day."

Felicity was about to yell once again, demanding clarity from Cressida’s constant obfuscations, when two double doors at the back of the tavern swung open. A tall figure, also cloaked in black but this time unmarred by gold dust, stepped forward. She held two barrels of water over her head, using her wide shoulders to bear the weight and cast a wide berth. Though her face was obscured by the light coming in from the sun, Felicity knew this had to be Dakota.

"What are you doing, old lady?" the figure said, and the voice panged in all the familiar ways in Felicity's heart.

Yes, this was Dakota. Dakota had made it into the Twilight Kingdom, too.