The Wicked Stepbrother and Other Stories (MM)

These stories are part of our cultural fabric. The stories change in retellings to reflect contemporary culture, such as Princess Charming, or heroes and heroines as people of color. In this collection, queer characters take center stage in stories that grew out of questions:

What if the prince falls in love with Cinderella's gay stepbrother? What if Rumpelstiltskin doesn't really want the Queen's child but rather the King himself? What if Beauty and the Beast are two men?

These stories explore metaphors of magic and the magical, this time, with a gay perspective. What price must be paid for happily ever after? Duty or love? Is love worth great sacrifice? Once upon a time ... 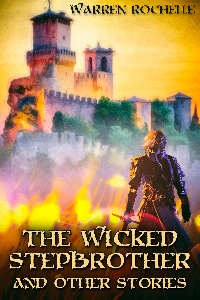 The Wicked Stepbrother and Other Stories (MM)

EXCERPT FROM "The Wicked Stepbrother"

"Well. Lord Culver, are we done? Are there no more women to try on the shoe?" Aidan asked as he stood from where he had sat all morning, next to my grandfather's great tome of a dictionary.

I was about to say no when my stable manager interrupted. "There's one more, Elena. She's in the kitchen, washing dishes. I saw her there when I came up."

Before I could protest, Aidan ordered her brought to the library.

When Elena came in, her hair braided and pulled back to keep it out of the sink, I knew, with a sudden certainty, who had stared at me before running away. She had to have had magical help. She glanced at me before sitting down in the chair facing Aidan and his shoe. A quick flash of triumph.

Of course, the crystal slipper fit. Of course, she had its mate in her apron pocket.

"I have found her -- my wife-to-be," Aidan said as he stood, taking Elena's hand, and gesturing to the room. Every woman still in line, all the male staff around me, my stable manager, the prince's entourage, burst into applause. I clapped, too, even though I felt like I was going to throw up.

So much for my half-loaf.

An hour before they left for the capital, after a dove was sent ahead with the news, Aidan took me aside, taking me back to the library. Holding my hand, he sat me down in an overstuffed chair in a reading alcove that overlooked the orchards.

"Cal. It's going to be all right. I have to marry her, and get her with child, but you are my true love; you'll be my mistress -- my lover. I'll fix that house for you. Cal?"

"Aidan, that might have worked with any other woman but not Elena. She hates me, and -- I've not been nice to her. She won't share."

There was a knock at the door, and the soft voice of one of his guards: "Your Highness. The Lady Elena has bathed and dressed. Her companion is ready as well. Your car is ready; another dove was sent to the King telling him you and the Lady are due to arrive soon."

"I will meet everyone at the car in ten minutes," Aidan shouted back through the door. Then he turned to me. "She'll share; she'll have her place and you'll have yours. Here, in my heart, no one closer. Walk with me to the car."

I so wanted to believe him, and I did until we walked down the steps. I recognized the companion, who waited by the prince's car, the little old lady who lived by the river, her old maid. And I smelled her: first folk, a pureblood, a true silver. I clenched my teeth. That old hag had done the magic for Elena. I learned later the old bitch had been with Elena since her birth and with the earl's family for at least three generations. She had been biding her time in that little house by the river. Now she stared at me, with a triumphant smirk. I sniffed again: she was very powerful and she wasn't afraid of me.

I jerked around to face Elena. She was beautiful, as she had been when she came to Colomendy years ago. So, the hag had hidden her weak eye -- some magical disguise. She glanced back quickly to find Aidan, who was at the door, conferring with his head guard and chauffeur, then turned back to me, getting as close as she could without touching.

"You monster. You lose," she hissed, her breath warmth on my face.

"He wants you?" She stared at me, incredulous, then glanced again at Aidan who was still talking to his servants. She laughed. "All the better then, eh?"

Then, in a flurry of commands and good-byes and thank yous (and one furtive squeeze of my hand) they were gone.

A month and a half later, on New Year's Day, they were married.