Most people in Ios know better than to challenge Vivarre and its powerful navy. Queen Thea, however, is not afraid to challenge anyone who gets in her way. For years, her kingdom has been supported by pirates. They sail the Iosian sea and raid any ship they come across for resources.

When Thea takes the throne she is challenged by enemies and allies alike. Though women can be warriors, they can never be true rulers. She hopes to change that belief, but she cannot do it alone. Driada is the only female pirate enlisted in Ios. She has served her kingdom faithfully for years, her dedication inspired by her father’s work on the royal ships. When she sees injustices being done against innocent people, she cannot simply sit idle while they suffer.

When these two bold, powerful women meet, it is obvious that they must form an alliance to keep Ios safe. But this alliance quickly shifts from being solely a political move, to one of the heart. Thea is forced to decide which path will lead to victory -- fighting Vivarre without divine help or betraying her promise to never bow down to the gods ever again. 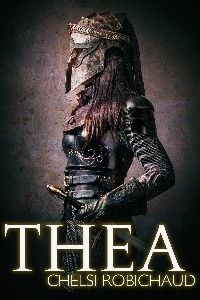 Most of the pirates, as well as some civilians gathered round the beach. The air was tinged with the smell of smoke and filled with the sound of jeers. They formed a circle around two figures; one standing and one on the ground. Once Doreius and Driada had approached, they were able to see them clearly: Captain Neleos towered above the woman he had taken as a slave. She was rolled into a ball, trembling with fear.

“What in Hidir is going on here?” Driada exclaimed.

Doreius frowned. “He had been treating her roughly before we left for Khalos, but it seems his aggression has escalated ...”

Erjon spotted them and joined their side. “He’s declared her a sorceress, a thief, and a temptress, amongst other things. He wishes to discipline her publicly as a sign of his authority.”

“I have to do something about this,” she said.

“Wait!” Erjon clamped a firm hand around her arm. “Remember our conversation about waiting for the right time to resist the captain? This isn’t it.”

“When will it be the right time, then?” Driada hissed. “Or are you just saying that to placate me because I’m not as strong as all of you?”

He frowned, a grimace forming on his face, but he didn’t release his grip on her. She tried to twist her arm free, to no avail. Their minor altercation turned a few heads but was otherwise ignored.

“Let’s not bring unwanted attention to ourselves,” Doreius pleaded nervously.

Erjon nodded in agreement. “Keeping slaves is natural, Driada. There are slaves in most homes. They know their place in society, and they are not treated unfairly.”

“Fine. I will concede that most slaves here are treated well. But this woman is not.” She managed to slip her arm away. “We can’t just stand by and watch him whip her bloody! I’ve seen what the captain does to discipline men, and so have you. Do you think she will survive that? Are you so cold as to watch our captain kill an innocent woman before our very eyes?”

Erjon glanced nervously at the captain, who was circling the woman and lashing his whip at the air. “If you take a weapon and run out there now, do you really think that will save her and walk away alive?”

He’s right. The wind howled in her ears. If I tried to fight the captain, I would be killed within moments. Even if the crew does agree with me, they could not stand idle while their captain’s safety is endangered. Damn it!

The only thing she could do was watch. The captain picked up a whip that was lying in the sand and took a few more practice strokes. It lashed through the air, and she winced to think of it hitting the poor woman’s back. She looked to the water. Pirei, god of the sea, hear my prayer. Do not let this woman be punished for a crime she did not commit.

Her prayers remained unanswered. The captain kicked the slave onto her belly and spread his legs on each side of her. Neleos raised the whip and brought it crashing down. It licked her back and left a gaping wound. She did not cry out, but from her trembling lips Driada knew she would not be able to withstand much more.

No one jeered anymore. Not a cry could be heard. It was as if they had all been rendered mute. One lash would have been enough for her alleged crime. Two would be acceptable. But three? Driada looked at the men surrounding her. Their eyes were shadowy with disapproval. What can we do? We swore an oath to the captain. Would we really defy him and break our word for one girl?

The captain raised his whip to lash her for a fourth time, but before he could strike, he was distracted by the roaring wind.

The god of the ocean was displeased. Despite the clear sky, and the lack of strong winds, the waves were rising and crashing tempestuously. They crashed onto the shore. The air was filled with a sound much like that of an earthquake. The ground trembled.

The crew no longer cared about the captain or the slave woman. Men scattered from the scene, seeking more stable shelter.

“This isn’t an earthquake,” Driada said, trying to get better footing.

“What? What do you mean? Can’t you feel the ground shaking?” Doreius asked.

Oh, I can feel it. But this isn’t natural. This is the work of the gods. Despite knowing she should flee with the rest of the crew, she did not. Instead, she strode forward, toward the water. As she walked, the world seemed to go quiet. The coarse grains of sand felt soft on her feet. And though she was a woman, for the first time in her life she felt stronger than any man. She knew the ground was shuddering, and yet she walked on.

A wave rose from the lake and came crashing down upon the shore, and onto the captain. He fell gasping to the ground, flattened on his stomach. The woman was untouched. She stood and fled to safety, invigorated perhaps by fear. Before the captain could clamber to his feet, another wave reached out from the ocean and struck him down. This time, however, it was almost as if an invisible hand had grabbed him, and dragged him towards the water, for he had moved closer to it.

Captain Neleos gasped for air like a man drowning and broke free of the water’s grip. When he rose to his knees, Driada towered over him, her feet planted firmly on the ground.

“Pirei can see you, even on the shore,” she said.