As an empath, Alek is ironically used to shutting people out—until, several days before Christmas, a one-night stand forces him to let someone in.

Being an empath is a lonely business, and Alek’s one-night stands do little to ease that feeling, even if he isn’t looking for anything more. He prefers to bury himself in his artwork anyway, or so he tells himself. That is until a young man named Jasper appears on his doorstep one December evening, threatening Alek’s careful control and making him want more than he’s ever dared ask for. Meanwhile, Jasper’s only two previous sexual encounters have made him more wary than hopeful—but tonight, he, too, may be getting more than he bargained for. 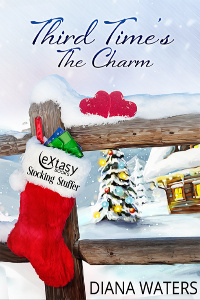 The young man stood on Alek’s doorstep, shivering a little. He wasn’t wearing a coat, gloves or a scarf, even though it had long since grown dark and the December night was cool. It hadn’t yet snowed this season, but Alek could smell it in the air. The polite smile felt a little strange on his face, as though his muscles weren’t quite used to the movement. He had been expecting this particular evening visitor, of course—already knew his name from the messages. Still, it always paid to ask—give the other party an easy out if they needed it.

He had not expected his guest to be so transparently nervous, however, especially since Jasper had been the one to initiate the meeting. “Of course. Please, come in. Did you walk here? I didn’t hear a car.”

The courteous small talk felt odd, too. Silence was easier, more comfortable, and Alek would sometimes go for days without wanting or needing to speak a single word, even to himself. He just wasn’t much for talking. It wasn’t that he disliked people or even socializing in general—certain activities were definitely better with company, after all—but much of the time, he found chatter exhausting or pointless. It was the main reason he avoided the bar scene like the plague. Keeping his empathy carefully locked away so it didn’t overwhelm him was difficult around so many people in one enclosed space, especially if they were drunk or high—or both. Their own natural barriers down, it sometimes felt like people were practically screaming their emotions out, flooding Alek’s senses with a tidal wave of feelings he could neither control nor escape.

Still, he had to admit, the usual awkward exchange of pleasantries at least had the advantage of making it easier to look people over without being caught staring. He made several mental observations now, doing his best to do so unobtrusively.

Jasper wore clean, loose-fitting jeans and a nondescript dark hoodie, also roomy enough that Alek couldn’t tell what exactly the clothing might be hiding. He cataloged the more obvious details as Jasper stepped over the threshold and into the light. He was shorter than Alek, though not by much, and his skin was tanned enough to suggest plenty of time spent outdoors. His face retained the faintly rounded shape of late adolescence, although Jasper was supposedly twenty-one—only six years younger than Alek, according to one of his messages. He had light brown hair, probably unaltered by bottled coloring or bleach, and no sign of any tattoos or piercings. Normal, in every sense of the word.

Normal, but for the fact that Jasper was here, of all places, already knowing what Alek was and seemingly not minding, and that his eyes were green and sharp as a fresh blade of grass.

Those eyes, flicking up to Alek’s face and then down again in an unconscious betrayal of his uncertainly, gave Alek pause. If Jasper had affected a different kind of manner—if he had been exaggeratedly aloof or arrogant, or deliberately casual—then Alek would have assumed Jasper simply wasn’t the type to care, so long as certain expectations were met. As it was, it made Alek a little wary.

In case it showed, he turned his back and made his way into the kitchen. “Can I get you a drink?” he asked politely. “Tea, coffee? Or I can probably find something stronger if you prefer—”

The answer came a little too quickly, but Alek chose not to comment. “What would you like instead?” 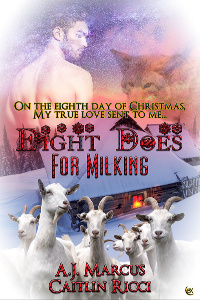 Eight Does for Milking
A.J. Marcus, Caitlin Ricci
In Shelf
$2.99