Time in a Bottle (MF)

The Hoolabaloo Musical Festival is one of the summer's biggest events, but country artist Macaulay Jensen isn't there for the much-needed career exposure. He's there to see one woman -- rock-and-roll superstar, Wendy DeMartino. Beautiful and wild, Wendy is out of his league. So Macaulay is shocked when she agrees to an after-concert date.

Wendy has always been attracted to Macaulay, and she's thrilled when he asks her out on a date. But the reality of their lives is too pressing to ignore, and the most she hopes for is one perfect day ... 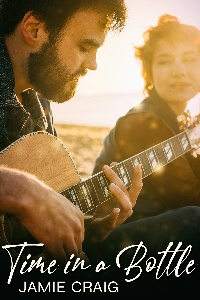 Time in a Bottle (MF)

Grabbing Macaulay’s hand, she pulled him off again, aiming straight for her bus. He didn’t argue. He never did. He just looked at her quizzically when they stopped at the rear.

“Come on.” She let him go to climb up onto the bumper, using a well-worn path to clamber onto the hot roof. Once up there, she inhaled deeply, stretching to embrace the heat of the sun.

“Best seats in the house,” he said. She didn’t turn around, and he was silent for a long moment. And then his arm was around her waist, and his mouth was near her ear. “I know I already asked this, but what’s going on?”

At the touch of his breath along her skin, Wendy closed her eyes and leaned back against his chest. In that moment, with nothing else said, she could do her own pretending. It got even better when she folded her arm over his, refusing him the room to let go.

“Sometimes I come up here when I want to think. You know, I actually wrote ‘Slander Me’ up here. And ‘Rapture.’” She sighed. “That was some good shit.”

“It was some good shit. I still remember where I was the first time I heard ‘Rapture.’ We were coming back from a show in a crappy little club outside of San Francisco, and Jill turned on the radio. As soon as I heard the first guitar rift, I knew it was you. I swear, nobody plays the way you do. I don’t just hear it. I can feel it. And then you started to sing and I ...” His voice faded, and he straightened, though he didn’t let her go.

She didn’t want to open her eyes. “You’re a funny man. You’ve just described how I feel every time I hear you.”

“Now I think you’re the one being funny. You know what I think is a little sad? This’ll be the first time I get a chance to actually hear you perform live. If our circumstances were different, I’d probably be one of your groupies.”

“And cheat everybody out of your music? I don’t think I’d ever forgive myself.” Wendy caressed the back of his hand, stroking long and slow over the slim lines. The heat was reflecting off the roof, heating her feet, but she didn’t want to go back down for anything. Not just yet. “Do you have anything going on after the show, or can I get you back for a few hours?”

“I’m yours until Jill forces me to leave. Why? You don’t think you’ll be bored with me by then?”

That finally opened her eyes, and she twisted around, looping her arms around his neck before he could withdraw. His long body pressed into her softer curves in all the best places. “If I haven’t gotten bored with you by now, it ain’t gonna happen. So you watch the show backstage tonight, I’ll get the press done right after, and then we’ll disappear for some late supper. Sound good?”

“I think that sounds great. I don’t know about you, but I am getting really tired of eating on the bus. Let’s see if we can find a decent restaurant or something.”

Wendy tamped down her disappointment at his desire for someplace public. After all, it wasn’t like it was anything new. “Whatever you want. As long as we get our date, that’s all that matters to me.”

That was asking me out on a date? But her shocked surprise was tempered by, Oh, fuck, it really is a date!

“Well, I know I’m not all out there like Catie,” she managed to say with a broad smile. “But I didn’t think I was so untouchable you’d be nervous about something like that.”

“You’re not untouchable.” He caressed the small of her back, as if to demonstrate how very not-untouchable she was. “But you always make me feel like the country bumpkin who’s come to the big city. I’m out of my element.”

“Your element is anything you want it to be.”