To Push Back the Darkness (FF)

When the trail goes cold on a string of robberies, Detective Janet Vertran is forced to call on her ex Fiona for help. When Fiona broke things off between them two years earlier, Janet swore she’d keep her distance. But she also knows from past experience how helpful Fiona’s creation, an android named Pat, can be in ferreting out the little details that make all the difference when solving tough crimes.

Though the robberies appear to have been conducted by separate individuals, Pat finds an unexpected connection between them. But as Janet, Fiona, and Pat get closer to unearthing the truth, it becomes clear the case is taking an emotional toll on Fiona.

As she works with her ex once again, Janet is reminded of old times and familiar feelings begin to stir. Is it possible they’ll get a second chance to make their relationship work? And will Janet find the courage to do what it takes to find out? 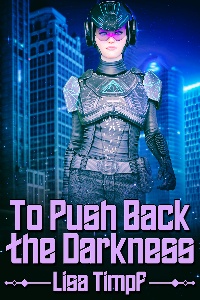 To Push Back the Darkness (FF)

I opted to take the stairs. It’d buy me time to sort out my muddled emotions. And as I began the jaunt from the fifth to the 13th floor, I found myself thinking back to the first time I’d met Pat -- well, one of the previous iterations of Pat -- fifteen years ago.

I’d arrived at work only to find the door to my office already open. “Hey,” I said, pressing my back against the wall and peering around the filing cabinets to see who’d invaded my space. I mean, the Precinct had standard safety precautions, but still ...

I relaxed when I saw two men wearing the distinctive blue overalls of the maintenance staff wrestling a piece of furniture into position. “You sure you’ve got the right office?” I asked. “I don’t remember placing a requisition. Although that is a nice work desk.”

“It’s not for you, ma’am,” the taller man said. “This okay for placement?” He nodded toward the new desk, which butted up against mine so that I’d be facing whoever was working there.

“Good. We’ll get the filing cabinets, then.”

I watched them depart, then walked over to my desk and fired up my persa-comp device. My Quikmail loaded onto the screen, and I opened a missive from the Captain dated August 3, 2030. Sent late yesterday evening. My eyes narrowed as I read it. Due to the Mayor's approval of additional staff, effective immediately, it will be necessary to double up on offices.

Well, this was immediate alright.

I shrugged. Nothing I could do about it. I just hoped whoever my new office-mate might be, they'd work quietly. The type of analysis work required to solve crimes called for concentration, and the last thing I needed was someone yakking to me all day.

Lunchtime came and went, with no officer showing up to occupy the new plas-leather chair behind the desk. I'd developed the hope that it might be some time before my new room-mate was assigned, when in walked a woman carrying an assortment of metal rods, wires, and something that looked remarkably like a human head. She dropped the lot on the empty desk and extended a hand, raising her head to meet my eye. “Hi, there. I'm --” She stopped dead the instant she saw my face. “Janet?”

“Hello, Fiona,” I said, struggling with limited success to keep my voice calm. “It’s been a while.”

A while was an understatement, and I knew it. I studied the other woman. The distinctive thatch of short, unruly auburn hair. The disconcertingly piercing blue eyes. The athletic frame, though I figured that, like me, she’d gained a few pounds since we were in our prime.

“Wow.” Fiona withdrew the offered hand and ran it, instead, through her hair, causing even greater disarray, if that were possible. “I just got word to report to the third office on the left after the elevator. Maybe there’s been some mistake --”

“Ah, I see you’re getting to know each other.” The Captain's voice came from the doorway. “Look, I’m sorry this has been such a rush. Admin's short-staffed, and the person who was supposed to do the advance communication was off sick, so ..." He shrugged.

"No problem, Captain," I said, welcoming the distraction. "We'll be fine."

"No mistake, then?" Fiona asked, her voice tentative.

“We’ll have to make the best of it. I can request a different assignment, if you prefer.”