To the Ends of the Earth (MM)

Joe is alone in his Brooklyn apartment, which he can't afford now. The pandemic complicates his plan to get a roommate. If only Michael could have stayed. Joe would join him on the west coast but he likes his job in NYC, in medical billing and coding. He does it online at home, at least for a while, but now he has to go back to the office and work in a plastic tent.

Vegan chef Michael detests meat, cooking it as well as eating it. Due to the restaurant where he works closing, he has to take a job cross country, leaving Joe behind. This happens before the pandemic, so his new job, cooking vegan takeout, becomes all the more necessary to keep. He lives with his sister in LA until he gets on his feet.

Joe and Michael find ways to stay connected over the phone, but it isn't the same. Should they try to make it work, or just give up now that they're so far apart? Joe's friend Cindy shares with him the romance stories she reads, but it takes a real-life love story in the hospital to help him decide. 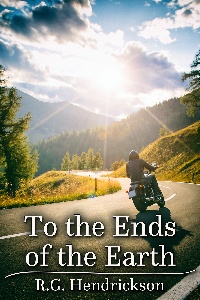 To the Ends of the Earth (MM)

He didn't bring it up last night, not wanting to spoil the mood, such as it was. Too bad they couldn't really be together, but the picture on the phone was better than nothing and sometimes quite hot. At other times it just made him lonelier, but what were they to do?

"He thinks it happened when he walked by that exhaust fan."

"Sure enough. The next day he had a fever."

"So far. He's strong. He'll get over it. At least I don't have to worry about him riding that crazy motorcycle for a while. I lost my job."

"Yeah, laid off on Friday."

"Me too." There was a pause. "So, it looks like I won't see Tony for a while. How's Michael doing? Are you guys okay, being apart and all?"

"We chat on the phone everyday. I see his face. It's almost like he's here."

"Well, not quite." She had a naughty tone to her voice. "There are some things you can't do on the phone."

"We talk. What else?" He couldn't believe she was going there.

"Yeah. Why?" He tried for nonchalance. "What do you do on the phone?"

"I would never do that." Her tone was nasal like she scrunched her nose.

"Do what?" He asked with perfect innocence.

"No, I don't." He was finished with this conversation.

"I know you guys do it. I read about it in my stories."

"Oh no. Here we go with the stories." Cindy's world view of gay men was based on what she read in MM romance, and the troubling part for him was that most of the time, she was right.

"Well, maybe while Tony's in quarantine, the two of you can, too."

"I would never do that," she said.

"Who knows who's looking? It's the internet! You guys don't care if your pictures get stolen, but I don't want mine spread all over the place."

"Well, then be careful."

Maybe it was a bad idea after all. His heart sank.