As an operative for Mitchell Security, Colt has spent much of his adult life being someone else. Presently, he's undercover as a bartender at a strip club to prove that its owner is part of a sex-trafficking ring. On his way home late one night, someone tries to kill him. Only Sax Lowe's fast actions save him -- which would be well and good, if Colt and Mitchell didn't suspect the whole thing was a set-up engineered by Sax as a way to insert himself into Colt's life.

Sax is a freelance photographer who often uses his job as a cover while working for the FBI. If he hadn't been following Colt, as part of his present assignment, he wouldn't have been around to save his life. A fortuitous event as it gave him a reason to stop by the bar the Bureau suspected was the center of a sex-trafficking ring.

Things escalate when Colt has a chance to obtain the final proof he needs to bring down the club's owner and the man's cohorts. When Colt and Sax's paths collide, again, the result is a surprise to both of them. Even more surprising, once the dust clears, is Sax's suggestion they work off their tensions in bed. Things don't go quite as planned, however ... But then, that's often the case for men whose jobs require them to be someone other than themselves. 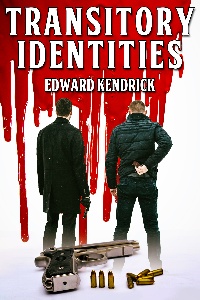 It was six A.M. on the dot Thursday morning when Colt walked into Mitchell's office. "Problems?" his boss asked before Colt had closed the door.

"You could say that." Colt walked over to take a seat across the desk from his boss. "I stopped by to talk to Ben because he'd let me know he had some information I might like about one of the guys at the club." Colt shook his head. "He was a day late and a dollar short, since I already knew what he told me. Anyway, when I left his place, someone did their damnedest to kill me."

Mitchell cocked his head in question, as if what Colt had said was nothing out of the norm. "How?"

"First by running me down and when that didn't work, taking pot shots at me and the guy who saved me from becoming another hit-and-run statistic."

"I don't suppose you got the license plate number."

"By the time I got a look at the car, it was too late. Besides which, he, I'm presuming it was a male, was running without lights."

"He had those, but they didn't light up the back plate, which by the way didn't have the requisite light over it." Colt shook his head. "Where's a traffic cop when you need one?"

Mitchell smiled briefly before asking, "Who was your savior and are you sure that's what he really was, and not a plant?"

Colt waggled a hand. "It could go either way. He said his first name was Sax, short for Saxton. We didn't exchange last names but according to him he's a freelance photographer working for some of the local papers at the moment."

"If he is, he should be easy enough to find. I'll set someone on it." Mitchell tapped a finger to his lips. "Could Ben have set you up?"

Colt considered the question before replying. "As much as we use him, he might as well be on the payroll. He's a punk but he's also smart enough to know he'd be the first person you'd look at if something happened to me right after I left his place, and there would go his paydays."

"What I need to do at this point is figure out if my cover's been broken or if someone from my past has caught up with me."

Mitchell didn't argue, only telling him to be 'damned careful' when he showed up for work at the club later that morning.

"Planning on it," Colt replied dryly. "One brush with death per twenty-four hours is my limit."