Tyler Honeycutt’s life is nothing special. He spends every day typing away in an anonymous corporation with nothing and no one to liven things up. That was until a charming stranger catches his eye.

In a sea of company dude/bros, Dean Merriman holds Ty’s undivided attention. Not only is he deliciously handsome, but his naughty, crooked smile is what dreams are made of.

The last thing Ty would ever imagine doing is talking to this sexy mystery man and ruining the perfect illusion. But when Dean shows an unexpected gallant streak, Ty is positively smitten.

Already lost in a fantasy world of love’s endless possibilities, Ty can’t help but think the invitation he finds on his desk to an exclusive early Halloween bash has something to do with Dean. Where this invitation leads isn’t the only surprise in store for Ty. Sometimes you’ve got to be tricked to truly enjoy your treat. 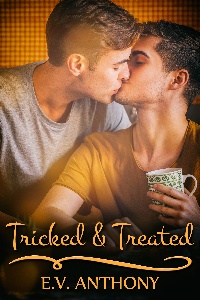 They were the last to arrive at the surprisingly full boardroom. The few chairs ringing the table were occupied and there were several people standing around.

There, across the table was the object of Ty’s obsession leaned up against the wall. He was not exchanging pointless small talk with those around him like nearly every other person in the room but seemed to be going over notes he had written.

Now that they were closer, Ty could absorb more details about this mysterious man. He was dressed just as neatly as he was the first time Ty had seen him. He drank in the new information like the day-old stubble along his strong jaw leading to his sweet earlobes. Attached lobes, Ty’s favorite. And freckles! This grown man had honest-to-goodness freckles spattered across his nose and cheeks. He was not a ginger by any means, just light-colored skin with soft brown hair, but he had to have German or Scottish or something in his genetics. I wanna see his DNA profile, Ty thought.

It was then that he noticed something that sent a tingle zapping up his spine. There, peeking out of the open neck of his shirt was some soft brown chest hair. Since early adolescence, Ty had been insanely turned on by body hair. The first ones to sprout it in his class earned Ty’s laser focus and undying infatuation. He was impossibly turned on seeing a flash of chest hair peaking out of a shirt, leg hair next to gym socks. And belly hair! Oh, when a man stretched upward and you caught a secret glimpse of a nice thick happy trail. Divinity. Better than a Christmas miracle.

Now Ty was thinking about this freckled stranger’s DNA in a whole new way. He wanted jet after jet of his fiery genetic makeup blasted all over his face.

Speaking of faces, he realized most faces were now pointed at him. He wondered if they had noticed his boner. Or worse yet, was he drooling?

“I take that as a no, then Tyler?” Melanie Chambers, an impatient department head who probably ate kittens for breakfast before burning down orphanages for fun and profit, was glaring at him, arms crossed.

“Well I’m not here for my health. Get with it. I was asking if you had noticed an uptick in reports from the Sales Department coming through your emails.”

“Not ... that he’s noticed. Suuuuper helpful. Or not at all, actually. Snap out of it. Nice shirt by the way.” Her tone indicated that was most assuredly not a compliment. A chorus of stifled laughs came from various spots around the room.

Ty blushed an intense scarlet and focused his eyes on the industrial carpeting. He felt Kim’s small hand gave his a firm squeeze of solidarity that he appreciated very much.

From directly across from him, he heard, “That’s uncalled for.”

“Who said that?” Melanie said, venom in her vocal chords.

“I did.” It was him. The Stair Descender. The Freckle-haver. His knight in shining polo.

“And exactly who are you?”

Dean Merriman. Never was there a finer name. A more noble man had never graced this Earth -- in Ty’s rather biased opinion of course.

“Thank you for your opinion Dan. Moving on.”

“Actually it’s Dean. And you can’t bully people or dismiss them. This is not 1983 and you do not have anything to prove. We will all respect you and follow your lead. As long as you’re worthy of that respect and leadership responsibility that is. Am I right, Helen?”

Dean Merriman. Glorious Dean Merriman. Ah, that clever man. Asking for input from Helen Conrad, the only member of the HR department in attendance, was a masterful move. Helen only nodded but the battle was well and truly met and won in that moment.