When ties between neighbours are broken, divisions between both lovers and friends occur. Sam becomes a victim and travels to Paris to assess his future. Here, he meets Annika, and as their friendship develops into more, he discovers the consequences of corrupt power and how the bigotry of the past is returning to haunt rational reasoning. 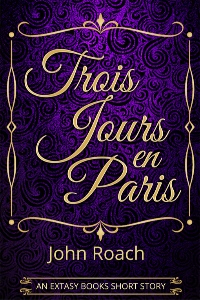 The automatic doors closed before Sam had time to find somewhere to sit. As the train picked up speed, he saw the station rush past and disappear from view. He walked along the central aisle, hoping to find a vacant seat. In the back of his mind, he thought about his impulsive decision to get away, on his own, but he was now on board the moving train. The first part of his journey had begun.

His mind wandered back to the divisions he was experiencing with his girlfriend and a so-called friend who’d begun to visit more frequently than he regarded as healthy. The atmosphere at home had become strained. The previous year, Sam and Chloe had decided to share a flat in the centre of the large Midland town where they both worked. Chloe had suggested the arrangement six months into the relationship. The rent was affordable, and they were able to live in relative comfort. They had a small group of friends, other couples who lived nearby, whom they met regularly. However lately, one couple, Tom and Chris, appeared to be having problems with their relationship.

Tom visited Sam and Chloe several times a week. Frequently Sam found him in Chloe’s company when he arrived home after work. Tom had always promoted himself as a political animal who supported what he claimed were empathetic principles, but lately, due to the political turmoil in the country, he’d begun to complain the English weren’t getting a fair deal.

Too many people from the continent had entered the country and were carrying out work designed for English people. He wasn’t the most enterprising or industrious, but his arguments appeared to impress Chloe. Any contribution by Sam, whose views were different, would be dismissed as if his presence had become an interruption. He began to feel isolated in the claustrophobic atmosphere. Eventually, Tom would leave, but not before he’d spent at least two to three hours in their company, sharing their evening meal and wine without contribution.

To eradicate his discomfort, Sam would occasionally suggest he and Tom should go for a drink at a local pub. Here, Tom’s conversations centred on complaints about his partner Christine. Sam listened and offered some advice, innocently hoping their problem could be overcome. He felt it useless to discuss politics, as he saw Tom’s beliefs turning full circle. This was anathema to Sam and mirrored the historic turmoil that created autocracy, not so very far from home. On one occasion, Tom claimed Chris had begun an affair with an old flame of hers. He had also met someone else, a woman, already in a relationship, but who wasn’t happy with her sex life.

“She says it’s over too quick, I can do it better,” he boasted.

Sam listened, trying to sound interested, but realised the dynamics within their friendship group was going to change. “You can’t be seeing much of Chris, or the other woman— you’re round with us most evenings, is it someone at work?”

“I go home every night, but it’s strained.” He’d said no more about his new interest.

Sam’s relationship with Chloe had become distant lately. She displayed a reluctance to show any affection towards him, and any amorous advances by him were treated with disdain. Tom’s visits didn’t help. In any discussion, Chloe would always take his side, much to Sam’s frustration.

At the beginning of April, before Tom’s over-regular visits had begun, Sam and Chloe had agreed to travel around the country for a few weeks at the end of July, stopping off at small hotels as the journey took them. However, a week before they were due to leave, she’d announced she was going to see her parents in Birmingham instead. She made it clear Sam’s presence was not necessary. They’d asked her to come home to help them decorate her old room as they wished to rent it out. As a result, and unbeknown to her, he decided to travel to France. He had no intention of being left alone in their flat. He needed to escape the intolerance he was reading about and to place his own life into perspective.

On the day Chloe planned to return to her parents, Sam left her in bed before she’d awoken properly, to shower, dress and find his rucksack. He took several T-shirts and underwear from his wardrobe to pack, along with a light sleeping bag and a one-man tent to be attached to the underside of his rucksack. For several minutes Chloe ignored his movements, until the noise of his rummaging through his wardrobe grew too loud.

“What are you doing?” she asked, displaying an element of annoyance, pretending to have been asleep.

Sam was perfectly aware she’d been awake since he’d begun to pack. Each time he entered the bedroom he’d noticed her position in the bed was different. She wasn’t a restless sleeper. “I’m off to London to see some of my friends, one’s I’ve kept in contact with since moving up here. Just a few days.”

“Aren’t you going to replace the lock on the bathroom door before you go?”

“It’ll be done before you come back.”

“Are you going somewhere else?”

Oh.” She made no further comment regarding the importance of the location.

This left Sam bemused. Maybe it confirmed what he’d suspected about the relationship. She’s even cold about that.

“Right, I’m off,” he said as he walked over to the bed to kiss her. She didn’t resist but showed no affection either, not turning to allow him to kiss her lips.

“Give my regards to your parents.”