High schoolers Charlie Matthews, Martin Anderson, and Sharon Collins win a contest to play an interactive-interfacing type of medieval game as the avatars of their favorite characters. Their mission: fight monsters, storm the castle, and capture the evil king.

Things go terribly wrong, though, when Charlie wakes up as Angella of Avernon, the lead female character in the game. While she happens to be the most powerful avatar around, he also finds out that they’ve been infected with a virus that will kill them outside the game.

Trapped and beset on all sides, Charlie has to deal with the sexism of the characters, circa 1430, Martin’s distaste for his female form, and his feelings about becoming a woman.

In addition to fighting off the various monsters, Charlie tries to fight off his attraction to Sharon…and then he realizes that Sharon is attracted to him, which makes it even more confusing. And when the deadly opponents in the game get the upper hand, Charlie must summon all of his love and courage to save the day and rescue Sharon.

Love is truly where you find it, and the gender of the one you love doesn’t matter at all. 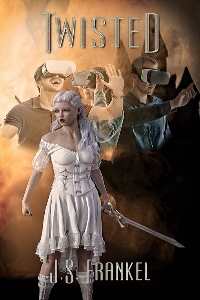 “C’mon, Charlie, we’re going to miss it,” Martin yelled from the entrance. “My dad’s driving us to Portland.”

Right, rant on, brother. When it was something important to him, he went full panic mode. For me, it was Tuesday.

The clock on the wall in the bedroom we shared read eight AM, and as the seconds ticked by, Martin got even more impatient. He bellowed out my name this time. “Charlie!”

I hastily pulled on a pair of jeans and a t-shirt and made my way out of the room. In the hallway, I stopped in front of the full-length mirror. Yep, still had a black eye, the remnants of a fight a few days ago, right after our school had let out for summer vacation.

Martin had wanted to buy a piece of software at the local mall, and while he was searching for the proper item, nature called. I excused myself to find the men’s washroom.

Shouts of outrage reached my ears when I returned. Some big guy who outsized Martin by a good eight inches and fifty pounds was pushing him around.

Calling it a mismatch was an understatement. My brother stood only five-three and weighed less than a twelve-year-old. He also wore glasses which made him look like a total nerd. A pretty blonde stood next to the large guy, fidgeting. It seemed that she was extremely uncomfortable with what had transpired.

“What’s going on here?” I asked as I walked over.

Big Dude glared at me. Kids at school called it a punking face, a cross between a gargoyle grinning and a hyena laughing. It was the look of someone who wanted to lay a beating on someone weaker for the sheer fun of it.

He slapped Martin on the top of his head. “What’s going on here is this twerp hit on my girlfriend. Who are you?”

The goon slowly put his arm down. As for the girl, she had the look of someone who was hiding something, as her eyes kept darting back and forth between my brother and her boyfriend. “Did Martin hit on you?” I asked.

Immediately, her face turned red. “No, he, uh, he just wanted to know if I liked computers. That’s it.”

Something didn’t add up. Martin had the social skills of a donut hole. He stood in place, quaking in his shoes, so going over to his side I asked, “You were just talking to her, right?”

His body stopped quivering, and his mouth barely moved when he whispered, “Yeah, that’s all.”

I pivoted around to face the boyfriend. “You heard the facts,” I said. “You want to forget about it?”

He didn’t. I got a shot to my eye for my efforts. Bastard—we went at it right there, and then the manager and a couple of stockpersons came over to break it up.

Martin, of course, did nothing. Once we got home, me with a black eye and a bloody nose, he said, “Thanks.”

Only after saying thanks did he reluctantly admit that he’d gone for a quick grab—around her waist.

In a halting manner, he explained that he didn’t think anything was so bad in asking someone out. No, nothing was wrong with asking—but his methods? A sigh of disgust came through my gut and out my mouth at his lame-assed excuse.

“Martin, asking someone out is okay. Putting the moves on someone who has a Neanderthal for a boyfriend and then lying about it is a really dumbass thing to do.”

I truly wondered if he did and pointed to my face. “Do you? I got into a fight for nothing…”

My mind returned to the present, and I touched my eye gently. My summer had gotten off to a rousing start. I tucked in my t-shirt and then ran down the stairs to meet him at the door. “Sorry, bro, I was just getting dressed.”

He squinted at me through his oversized glasses. I knew that squint. It meant we’d be late if we stuck around five seconds longer. “Travianna waits for no one!” he shouted.

With a sense of the inevitable, I sighed, but softly. At least someone was happy. Anything developed by the Hummel Corporation, the leading game software developer on the market, Martin just had to have it.

Martin and I shared a room and he usually kept me awake half the night, hunched over his computer, his body shaking with excitement as he cackled over the game he was playing. Pretty much everyone else in the world got married. I could honestly see Martin marrying his computer.

Still, my brother could have his time in the sun because after the gameplay demo, some serious pool and beach time called. With almost three months of vacation ahead before senior year began, I had goals.

First, get a tan, work out, and bulk up. At six feet and one-eighty, my body resembled a muscular swimmer’s. No metrosexual look for me. I wanted the Alpha Male, don’t-screw-with-me look.

Next, find a girlfriend. I’d had the idea of finding the perfect girl since I turned sixteen, one year ago. It didn’t matter what she looked like.

So far, no luck yet, but three of the second-year girls at Merryville Senior High, the best high school in the greater Tacoma area, had given me the eye the final few weeks of school and handed over their phone numbers on the last day of the semester, so yes, chance city.