Dr. Marcus Jones is world-famous for inventing a procedure to make cardiac surgery quicker and safer.  He has achieved much in the ten years since he graduated from medical school, including accumulating more wealth than he had ever dreamed of growing up in the projects in Chicago.  But he has not been as successful in his personal life.  His lawyer wife is divorcing him--but then, he was never really in love with her.  He has only felt that way about one woman--the one he dated back in college--the one who got away.   When he finds her name on the internet, he contacts her, determined to see if he can rekindle what they once had together in college, back when he could only spare one night a week away from his studies and his world revolved around Tuesdays. 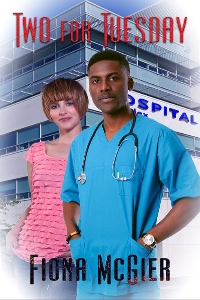 Marcus Jones didn't remember consciously planning to go to see her. He just realized all of a sudden, when the conference ended at noon, that it was a Friday afternoon and he had no appointments until Tuesday, and he was in the same state that she lived in. Just how many hours would it take to get up there from Madison? He had not yet checked out of his room, so he went back to it and turned on the laptop to get a map and directions. Do they have directions to towns that small?

He was surprised to find that it wasn't quite as tiny and inconsequential as he had imagined. In fact, compared to the other tiny dots along the highway, it was a fairly good-sized town. The directions seemed easy enough to follow, and the computer estimated time of arrival was three to four hours’ drive time. Of course that was presuming one followed the speed limit. Which I never do. Especially since my Jaguar does zero to eighty in a few seconds and purrs like a kitten while cruising at ninety. But will she agree to spend any time with me?

He brooded. She'd said in her last e-mail that she didn't want to see him until his divorce was final. She was afraid of the repercussions of being an unmarried high school teacher seeing a married man, a big-city, world-famous cardiologist. She never mentioned his color. But then to her, that had never mattered. Are there any Black people that far north in Wisconsin?

Suddenly Marcus was blindsided with images of the light streaming in through the window next to her bed, illuminating her pale white skin next to his brown skin. Which led to remembering what they were doing at the time. He felt himself getting harder than he had in years. He smiled to himself, wondering if being with her again would allow him to perform as he used to do when they were together and both in their early twenties. He struggled against accepting it as inevitable that ten years would somewhat diminish his sexual cravings. But whenever he thought about her, they were as intense as they had ever been. Still, is it worth it to drive all the way up there, when she might not even agree to spend any time with me? That is, presuming I can even find her.

He remembered what it had been like for them back when they were at school together. He remembered when he met her—their first night together—all of the other times over their almost two years together. He remembered just how much pain he felt when she ended their relationship. Looking back, he understood why she had done it—but it still hurt. He had tried to forget about her. He dated other women—even convinced himself he was ready to marry someone else.

But from the minute he’d thought to check for her name on Facebook, he realized he'd been working up to this point. He found her and sent  her a friend request. After an interminable wait, he had gotten an acceptance from her. Then he knew he would have to see her again, sometime. Why not today?

She told him not to come up until he was divorced. Hey, it's in the works—only a matter of time. And when will I be only three to four hours away again, with no appointments or operations scheduled for three days?

If I time it right, I'll get up there just as she's getting off of school for the weekend—a long, holiday weekend. I'll ask her out to dinner. Yes, just the thing. Dinner between two old friends from college—what could be more innocent?

He smiled at his own very far from innocent thoughts, and began to pack up the last of his things, including his notes and his laptop. He lugged it all down to his car before checking out of his room.

The clerk seemed surprised that he wasn't staying the weekend. Most of the doctors in for the convention were staying until at least Sunday.

She asked in an inviting tone, "Don't you want to stay around long enough to see the sights of downtown? I could show you around."

Amused that the young clerk might be trying to flirt with him, he politely turned down her offer and paid his bill, then left the building. Honey, I'm old enough to be your daddy. Ew!

The drive confirmed everything he had always thought about life away from the city. Lots of miles of nothing to look at. Nothing but corn fields, barns, and cows. And what is that awful smell? Cow shit, or pig shit? He always laughed at her, when she told him it was easy to tell the difference. She said that pig shit was unique—you knew that was what you were smelling when the aroma snuck right up into your nostrils and pulled the hairs out, making your eyes water. He just figured it all stank, so who cared what kind of animal made it? She told him that she was proud to be a farm girl, and he was just a big-city snob. They agreed to disagree, way back then.

Out here in the middle of the great big emptiness of Wisconsin farm fields, he remembered why he lived in the city of Chicago, with its hustle and bustle of life—human life, with human smells all around him. He turned up the CD even louder, as if hoping that the loud music of the city would somehow insulate him from the mile-after-mile of nothing that he was rapidly driving through. But each mile brought him closer to her, and that was the whole point of this. He speeded up, pushing closer to the limit of his car.