Welcome to the world of “the unsures,” Angela Kelly's affectionate term for women falling at various points on the in-between scale of gay and straight.

Meet Liza, the single mother from an under privileged background, used to finding partners who will give her a sense of security. Then there's Jennifer, the stripper who really does have a heart of gold. Sandy is the direly sexy friend Angela chased for years before winning over. Annie presents herself as a teacher and mentor but proves to be a manipulative narcissist. These and the other characters present a rich tapestry of love, lust, obsession and, finally, redemption.

Threaded between these stories of failed romance you will find self-discovery and a coming of age and awareness. Join Angela Kelly as she learns about her own issues, dysfunction, addictions, and interpersonal dynamics that contribute to her attraction to unavailable women ... and their attraction to her. 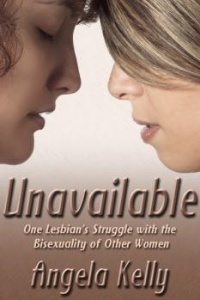 So dependent upon her to fulfill my emotional needs, I planned my 31st birthday party around her and the club and a couple of other dancers I’d become platonically friendly with. I invited all my so-called friends, including my ex-wife and her new lover. I figured the more people I could get to contribute to what I termed my “lap dance fund,” the more time I would have with Sunrise and, by then, that was all I wanted, all I craved, the only single thing I looked forward to on any given day.

To date, aside from getting to be with her, it was the single worst birthday I have ever had. I had reached a point of really coming apart at the seams with my multitude of addictions and faced moving out of my broken home into a new place, a new future, single and scared to death. By the time the night I’d looked forward to with such anticipation finally arrived, I was a broken woman and it showed. Having already been up for two or three days, no amount of continued substance abuse was going to make me feel any better.

But I hoped against hope that she, this angel in my life, would. Inevitably, while getting my extended lap dance marathon at the end of the evening, I could not hold it together any longer. Over Sunrise’s shoulder, I saw my ex-wife, sloppy drunk, belligerent, embarrassing. I saw the reality of my circumstances: a birthday with people I called friends who barely knew me; my dealer among them, whose gift to me was a shot of Crown Royal and a card with a free baggie of drugs taped to the inside; co-workers from a job I was very close to losing; the epitome of my failed marriage stumbling away toward the bar ... all surrounded by the empty glasses and bottles I had drained in a desperate attempt to escape what I had become.

Pathetically, on top of it all, I could see my own reflection in the mirror-lined walls of the dancing area behind the DJ booth -- a woman who, at that moment, had nothing and no one, who felt the closest to the person I was paying money to touch me whose real name I didn’t even know. There was nothing left for me to do but what I did next. I wept.